Question 1: Define bound electrons.
Answer: As nucleus is positively charged it strongly attracts the negative charged electrons. The electron orbit close to the nucleus are tightly bound by strong attractive force of nucleus. These electrons are known as bound electrons. 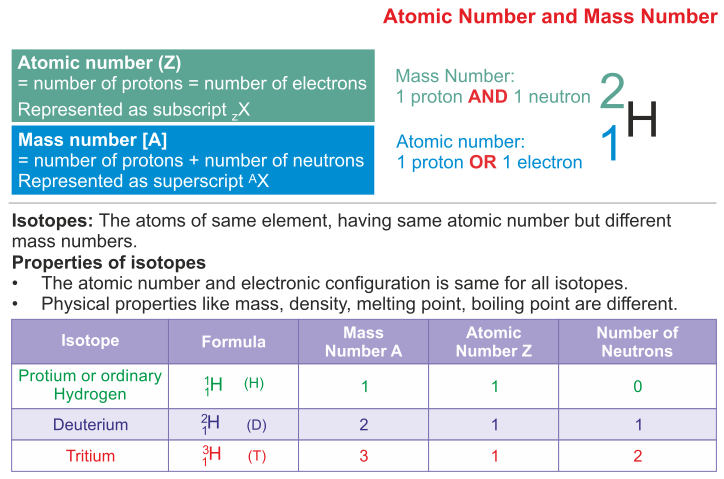 Question 5: What are isotopes? Give examples.
Answer: The atoms of same element which have same atomic number but different mass number are called isotopes. Examples: Protium, Deuterium, Tritium.

Question 6: What are isobars? Give examples.
Answer: The atoms of different elements which have the, same mass number but differ in their atomic numbers are called isobars.
Examples: Sodium, Magnesium.

Question 11: State two characteristics of the substance used as thermionic emitter.
Answer: (i) The substance must have high melting point.
(ii) The work function of the substance should be low so that electrons may be emitted even at low temperature.

Question 12: What do you understand by the following terms?
(i) Nucleus, (ii) Nucleons.
Answer: (i) Nucleus: The central core of an atom is called nucleus. The nucleus contains protons and neutrons.
(ii) Nucleons: Neutrons and protons are collectively called nucleons.

Question 17: State any two uses of cathode rays.
Answer: Cathode rays are used for:
(i) Converting electrical signal into a visual signal, (ii) In television.

Question 21: In a cathode ray tube state. How is it possible to increase the rate of emission of electrons.
Answer: (i) Decrease work function.
(ii) Coating the cathode with a layer of alkaline earth metallic oxides (or) hydrides.

Question 25: What do you understand by the term radioactivity?
Answer: The process of self, spontaneous and random emission of a or P and y radiations from the nucleus of elements of atomic number higher than 82, is called radioactivity.

Question 27: What is meant by Radioactivity?
Answer: Process of spontaneous emission of α or β and γ radiations from the nuclei of atoms during their decay. 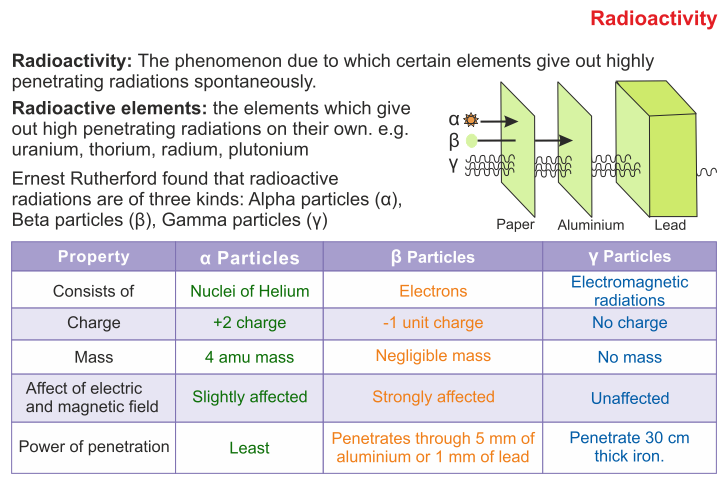 Question 35: Justify with reasons, whether the following nuclear reactions are allowed or not.

Question 37: A radioactive nucleus undergoes a series of decays according to the sequence

Question 44: State, giving reasons, whether the following nuclear decays are allowed or not?

Question 49: What changes occur in the nucleus of a radioactive element when it emits an alpha particle? Show by an example?
Answer:

Question 50: What will an alpha particle change into when it absorbs:
(i) One electron; (ii) Two electrons?
Answer: (i) Single ionised Helium (He+), (ii) Helium atom.

Question 53: When an alpha particle gains two electrons it becomes neutral and becomes an atom of an element which is a rare gas. What is the name of this rare gas?
Answer: Helium gas.

Question 57: What are α-and β-radiations?
Answer: α radiations are positively charged particles with charge + 2e and mass 4mp where e is electronic charge (i.e., charge on a proton) and mp is the mass of a proton.
β radiations are negatively charged particles (i.e., electrons) with charge – e and mass 1/1836 times the mass of a proton.
γ-radiation are electromagnetic waves of wavelength in the range 0.001 Å.

Question 60: What happens to the atomic number of an element when it emits:
(i) An alpha particle; (ii) A beta particle.
Answer:

Question 61: A radioactive carbon nucleus 6C14 emits a β-particle to form a nitrogen nucleus. Represent the change by an equation showing the atomic and mass number of each elements.
Answer: When the nucleus of an element emits a beta particle, the number of protons increases by 1 and number of neutrons decreases by 1.

Question 62: Two radioactive nuclei are represented by xAp and yAq and when p and q are mass numbers and x, y are the atomic number. How can the products be represented, i .e., what are the new values of p, q. x and y after the emission of an α-particle and a β-particle from A and B respectively.
Answer:

Question 63: A nucleus of an element has the symbol 84P202, and emits an α-particle and then a β-particle. The final nucleus is bQa Find a and b.
Answer:

Question 65: Explain briefly what changes take place within the nuclei when beta particles are emitted by a radioactive substance.
Answer: The mass number remains unchanged but atomic number increases by 1 of the nuclei undergoing such a change.

Question 70: Arrange α, β and γ-rays in ascending order with respect to their (i) Penetrating power,
(ii) Ionizing power and (iii) Biological effect.
Answer: Given below:

The star indicates the excited state of nucleus.

Question 73: What are beta rays and gamma rays?
Answer: β-rays are a stream of electrons emitted by the nucleus of an atom and γ-rays are electromagnetic waves of high frequency given off by nuclei.

Question 76: A radioactive substance, is oxidised. What change would you expect to take place in the nature of radioactivity? Give reason for your answer.
Answer: No changes as the nucleus of the element is not involved.

Question 77: State the medical use of radioactivity.
Answer: (i) Radioactive radiations (gamma rays) are used to cure diseases such as cancer etc.
(ii) Radio isotopes such as NaCl etc. are used for diagnosis.

Question 85: What is nuclear energy? Name the process used for producing electricity using nuclear energy.
Answer: Nuclear energy is the energy released by the atom’s nucleus during a nuclear reaction. It is an exothermic process. The process of Nuclear fission is used to produce electricity.

Question 86: State one important advantage and disadvantage each of using nuclear energy for producing electricity.
Answer: Advantage:
Higher order of electrical energy can be produced.
Disadvantage: Difficult to control the higher order energy release as it damages the control rods and difficult to dispose the nuclear wastes.

Question 88: What is meant by nuclear waste?
Answer: After disintegration the radioactive material finally converts into lead and still it holds some radioactivity. This is called nuclear waste.

Question 1: State three ways of obtaining an electron-beam.
Answer: The three ways are:
(i) In a cathode ray tube, when pressure of 0.01 mm of Hg and a high p.d. of about 10000 V is applied across its electrodes.
(ii) In a diode-valve, it is produced from the heated cathode from where they are attracted by the anode plate kept at a high positive potential.
(iii) Electrons are also produced in the process known as ‘photo electric emission’ by focussing light on a metal surface coated with cesium oxide.

Question 2: Name the particles that constitute the cathode rays. State some properties of cathode rays.
Answer: Cathode rays are made up of electrons—the fundamental negatively charged particles. These rays have the following properties, among others.
(i) They can affect photographic plates and produce fluorescence in materials like zinc sulphide.
(ii) They carry momentum and energy.
(iii) They are deflected by electric and magnetic field in the sense in which negatively charged particles are deflected.

Question 4: Name the three main parts of a hot cathode ray tube. Mention one important function of ear main parts:
State the principle on which the functioning of a nuclear reactor is based.
Answer: Three main parts of hot cathode ray tube:
(i) The electron gun,
(ii) The deflecting system,
(iii) The fluorescent screen.
Functions:
(i) Electron gun gives out fine beam of electrons.
(ii) The deflecting system deflect electron beam in horizontal and vertical direction.
(iii) The fluorescent screen gives bright spot on stirking of electron.

Question 5: What precautions must be taken for the safe disposal of nuclear waste?
Answer: The nuclear waste obtained from laboratories, hospitals, scientific establishments or power plants must be first kept in thick casks and then they should buried in the specially designed deep underground stores. The stores should be make quite far from the populated area and the casks should also be buried and scaled in useless mines after storing if. 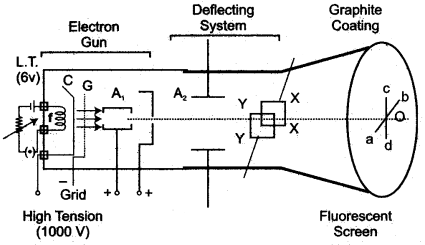 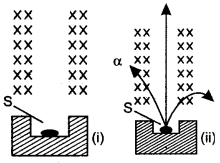 Answer: The figure (ii) shows the path of radiation in the magnetic field. The source is kept in a thick-walled lead container so that the it.
Radiations may not come out in the undesired direction otherwise they will harm the person working on.

Question 1: Answer the questions with respect to the following diagram:

(i) Name the charged particles emitted from the heated filament? Name the phenomenon of emission of these particles.
(ii) A beam of such particles, after acceleration is allowed to strike a metal plate C. Radiation B is given off. Name the radiation B.
(iii) Name the material of target C.
(iv) State two properties of radiation B different from those of visible light.
(v) State two factors on which the wavelength of radiation B depends.
(vi) State two uses of radiation B.
(vii)Why is it necessary to cool the tube?
Answer: (i) ‘Electrons’. The phenomenon of emission of these particles is called “thermionic emission”.
(ii) Radiation B is called “X-rays”.
(iii) The material of the target C is “tungsten.”
(iv) The properties of radiation B differ from those of visible light are:
(a) These radiations can penetrate through the substances which are opaque to visible light.
(b) They destroy the living cells.
(v) The wavelength of radiation B depends upon:
(a) Potential difference applied between cathode and anode.
(b) Material of the target.
(vi) Uses:
(a) In the field of medical science (X-rays photography used in surgery)
(b) In scientific work (to study crystal structure).
(vii) A large amount of heat is produced when the high kinetic energy electrons strike the target. Therefore it is necessary to cool the tube.

Question 2: A certain nucleus X has a mass number 14 and atomic number 6. The nucleus X changes to 7Y14 after the loss of a particle.
(i) Name the particle emitted.
(ii) Represent this change in the form of an equation.
(iii) A radioactive substance is oxidized. What change would you expect to take place in the nature of its radioactivity? Give a reason for your answer.
Answer: (i) Particle emitted is β-particle.
(ii) 6X14   →   7Y14   +   -1β0
(iii) No change. Since the phenomenon of radioactivity is not due to the orbital electrons which would be easily affected by such changes. Radioactivity is the property of the nucleus.

The atomic numbers (Z) of P and Q are the same but their mass numbers [A and (A-4)] are different. So P and Q are isotopes.

Question 2: An element X has the symbol 84X202. It emits an alpha-particle and then a beta-particle. The final nucleus is bYa. Find a and b.
Solution:

Question 1: A certain nucleus X has a mass number 15 and atomic number 7. Find the number of neutrons. The nucleus X losses (i) one proton (ii) one β-particle, (iii) one α-particle, Express each change and write the symbol of the new nucleus in each case.
Solution:

Question 2: An element 92U238 losses one alpha particle, and then one β-particle and then again one β- particle to get the final nucleus bQa.
(i) Write down the values of a and b.
(ii) State the relationship between the nuclei P and Q.
Solution: