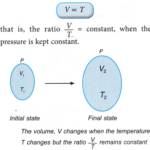 What is the Relationship Between Temperature and Volume of a Gas  A woman left an empty water bottle in the car on a hot day. When she opened the door of her car at night, she felt the air in the car was cold and found the bottle compressed, as shown in Figure.Charles’ law gives the relationship between the volume and the temperature of a fixed mass of gas at … END_OF_DOCUMENT_TOKEN_TO_BE_REPLACED