What is Refraction of Light 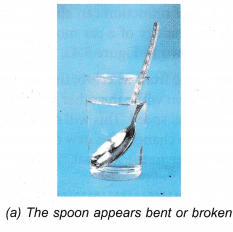 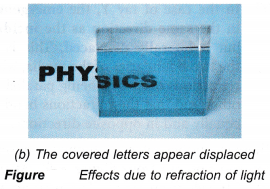 When a spoon is immersed into a glass of water, the spoon appears bent or broken as shown in Figure (a).
When a part of the word PHYSICS is covered with a glass slab as shown in Figure (b), the covered letters appear displaced.
The two situations described are perceptions due to the change of the direction of a light ray when it leaves the water or the glass and enters the air.

Definition: When light rays travelling in a medium are incident on a transparent surface of another medium they are bent as they travel in second medium. 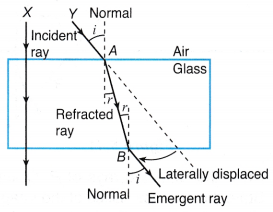 Laws of Refraction of Light

First Law:  The incident ray, the normal to the transparent surface at the point of incidence and the refracted ray, all lie in one and the same plane.
Second Law : The ratio of sine of angle of incidence to the sine of the angle of refraction is constant and is called refractive index of the second medium with respect to the first medium.
\(\frac{\text{sin i}}{\text{sin r}}=\text{ }\!\!\mu\!\!\text{ }\)