Paragraph On Gandhi Jayanti: Mohandas Karamchand Gandhi or Mahatma Gandhi was born on October 2, 1869, in Gujarat. The father of the nation, a social reformer and a freedom fighter persevered tirelessly working in the notions of ahimsa (Non-Violence) to get Bharat free from the clutches of the British Raj. The entire country is indebted to his efforts and therefore we celebrate Gandhi Jayanti on October 2 to mark his effort. The following are the paragraphs on Gandhi Jayanti for different classes.

Many children give a speech on Gandhi ji on this day. The whole world respects Gandhi Ji. 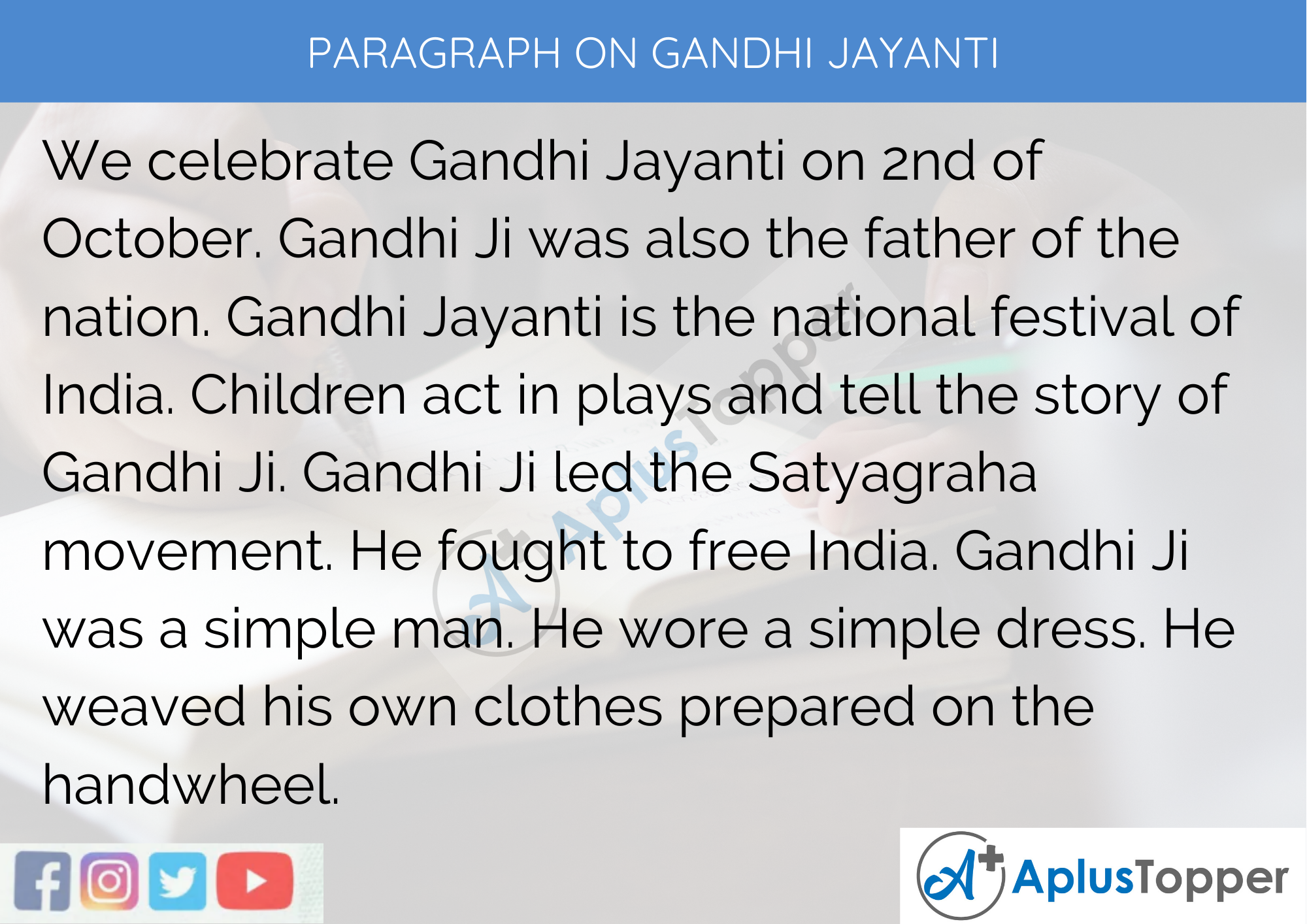 Gandhi Jayanti is celebrated on October 2 of every year. The day signifies his birth anniversary. Gandhi ji was a freedom fighter. We celebrate this day in the memory of his sacrifices done for the country. He led various movements to drive out the British from India. Satyagrah was one of the famous movements. Quit India movements and the Swadeshi movement are other two famous and important movements that got us freedom in 1947.

On this day, many students perform plays sending people a message of non-violence. Many students sing patriotic songs on the day, to mark his birth anniversary. Many students paint on the theme of Gandhiji and his teachings. The day is soaked in patriotic fervor and we remember his wise teachings- “not to see bad, not to hear bad and not to speak badly”. On this day, many movies are broadcasted on television and radio channels centering around his life. Soonly we will Update Paragraph on Gandhi Jayanti in Hindi, Malayalam.

Short Paragraph on Gandhi Jayanti – 200 Words for Classes 6,7 and 8 Students

Gandhi Jayanti falls on every 2nd of October. It is a national festival. Mohandas Karamchand Gandhi is known for propagating nonviolence in his teaching. His various movements including Swadeshi and Satyagraha were based on his notions of non-violence.

He believed in the ‘make in India’ concept long ago and therefore asked his fellow people to weave clothes through handwheels also known as charkha. He wore khadi clothes and discarded foreign products. He was not just a freedom fighter, but also a social reformer. He removed social stigmas such as casteism and untouchability. He named the then untouchables as Harijans or children of God.

Gandhi Jayanti is celebrated wholeheartedly all over the county in schools, colleges and universities to mark his teachings. Various students act in plays and nukkad nataks to create awareness about the teachings of ‘ahimsa’ or non-violence and swadeshi movement. Students also take part in poster making competitions on this day and sketch his pictures as well.

Banks and offices remain shut in his respect. Principles and students give a speech on his teachings. Movies are broadcasted that center on his life. It was due to his relentless efforts along with other leaders that we can breathe freely in our country today.

Mohandas Karamchand Gandhi was born on 2nd of October 1969. We celebrate Gandhi Jayanti to mark his birth anniversary and his endeavors in getting our country free from the clutches of the British Raj. Also known as the father of the nation, he has laid his contributions in various movements to chuck the British out of the country and retain the essence of ‘Bharat’. Non-violence and simple living were his two basic principles that he followed.

A man who was educated in law, in Africa, returned to India to liberate his countrymen. Clad in just a dhoti, teaming it up with a pair of glasses and a stick, he walked miles along with fellow Indians to Dandi to extract salt and show the British colonies that United, we have immense powers. Propagator of Satyagraha and the civil disobedience movement, he also freed his countrymen from the then existing social evils such as untouchability.

He believed in self-reliance and therefore promoted the concept of weaving his own clothes instead of wearing ones made by the British. This also made Indian women self-reliance, therefore, emancipating them.

This is how India celebrates Gandhi Jayanti:

Gandhi Ji taught us the importance of self- reliance, honesty, and non-violence. Students take the pledge in assemblies to observe the same apart from singing his favourite bhajan- ‘Raghupati Raghav’. 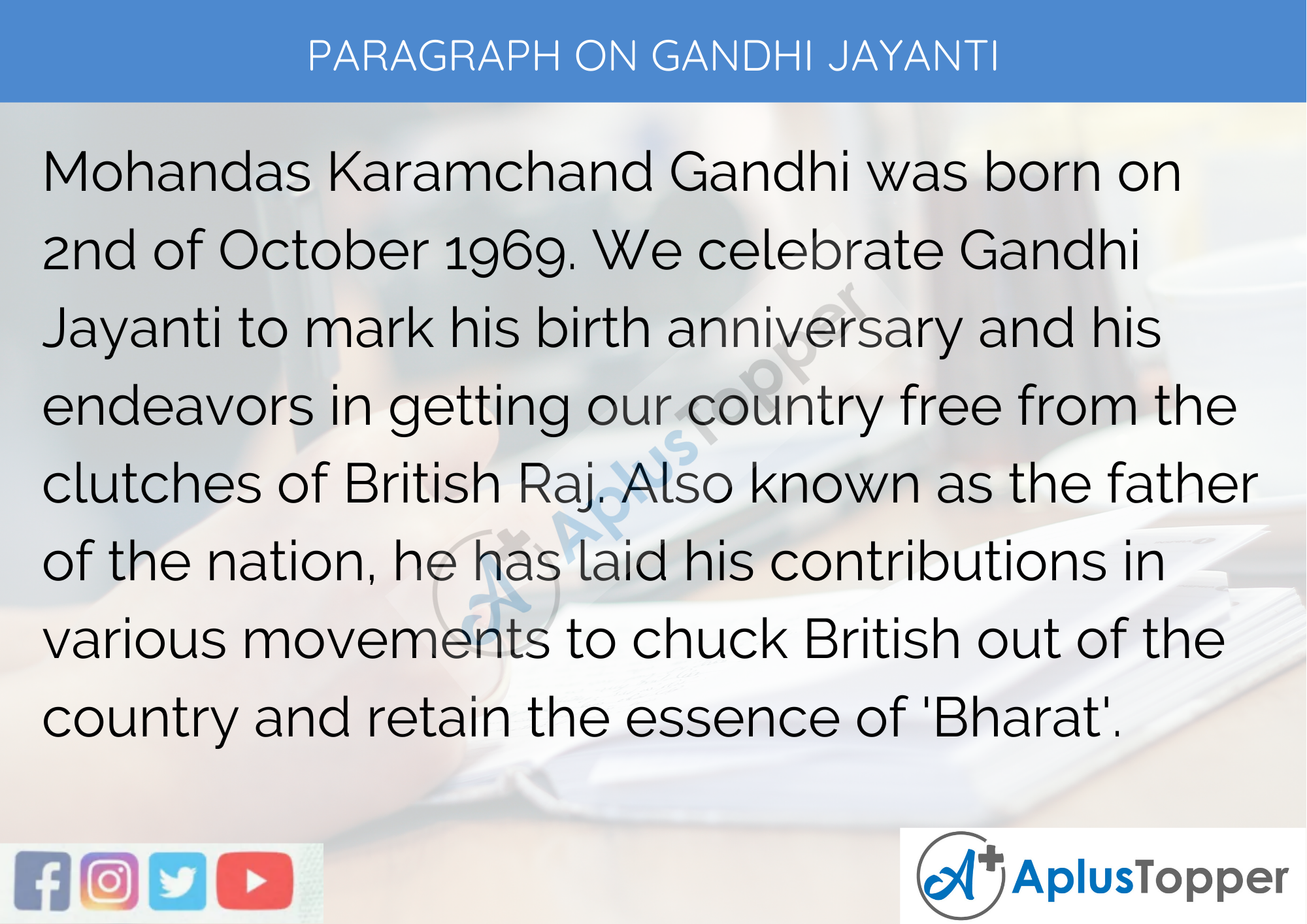 FAQ’s on Paragraph On Gandhi Jayanti

Question 1.
When is Gandhi Jayanti celebrated?

Answer:
Gandhi Jayanti is celebrated on October 2nd of every year.

Question 2.
Why do we celebrate Gandhi Jayanti?

Answer:
We celebrate Gandhi Jayanti to mark his endeavors in attaining freedom for India.

Question 3.
How is Gandhi Jayanti Celebrated?

Answer:
Students at schools, colleges and universities take part in speeches, drama, dance and singing that centers around our father of the nation Mahatma Gandhi. Offices and banks remain shut in reverence to him.