Gandhi Jayanti Speech: Mohandas Karam Chand Gandhi, also known as Father of Nation, was born on October 02nd, 1869 at a small town named Porbandar in Gujarat. Mahatma Gandhi’s 150th Birth Anniversary will celebrate in India, not only in India his birth anniversary will celebrate and organize with different programs around the world. On this occasion, students will give different stage programs and speeches. In this article, we are providing complete information about a Short Speech on Gandhi Jayanti. Read on to Find more about Gandhi Jayanti Speech. 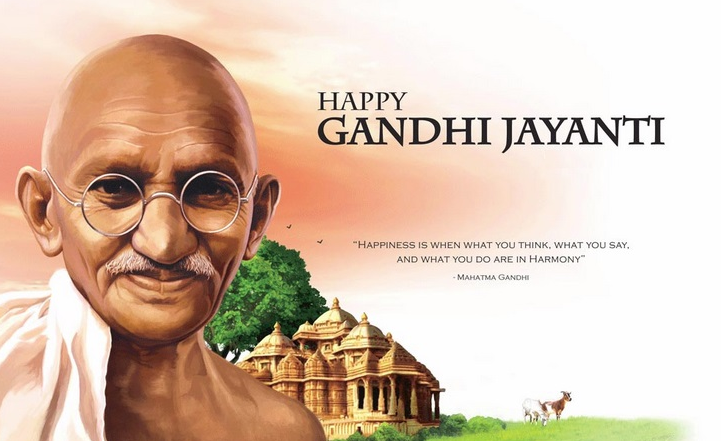 Good Morning Everyone! My name is XYZ and we have gathered here to celebrate the birthday of Mahatma Gandhi. This is Gandhiji’s 150th birth anniversary. Because of his struggle for India’s Independence, Netaji Subhash Chandra bose gave him the name of “Father of the Nation”. Also, sometimes we call him ‘Bapu’. In India, Gandhi Jayanti is celebrated every year on 2nd October, to pay a tribute to him, who devoted his life to India’s Independence by using his strong weapon, ‘Non-violence’. Not only in India, in fact, in the whole world, but this day is also celebrated as International Day of Non-violence.

Gandhi Jayanti is celebrated to remember Gandhi’s principles of peace and non-violence. And to educate and inspire the present generation, the contribution made by Gandhiji to make India an independent country. He has gone through a long struggle so that the people of India can breathe in an independent nation. He was a devotee of truth and non-violence (Satya and ahimsa ke pujari). In his honor, the UN General Assembly has announced this day as The International Day of Non-Violence, on 15th June 2007.

Every year Gandhi Jayanti is feasted at Raj Ghat, Delhi and our prime minister along with the president of India gathers here to pay the tribute by offering flowers to his Samadhi. Also, his favorite song “Raghupati Raghav Raja Ram” is sung for him. All the schools, colleges, private offices, and government organization remains closed on this National holiday.

Gandhiji’s full name was Mohandas Karam Chand Gandhi. He was born in a small coastal town of Gujarat, known as Porbandar, in 1869. He was an honest man and ‘truth lover’. In 1888, he completed his law in the UK and then shifted to South Africa to practice it. After 21 years, he started with peaceful civil disobedience or Satyagraha. After coming back to India, with Ahimsa (nonviolence), he fought for the freedom of India from the British rule. It is because of him and other national freedom fighters, India got freedom from 200 years of slavery.

Gandhiji being such a great leader, preferred to wear Khadi clothes. He never accepted British culture and always followed the old traditional culture of India. He always encouraged the people of India to have faith in themselves and fight for their rights. He asked the Indians to not to serve the British and fight for their freedom. It is because of his devotion and struggle, that India is a free bird today.

Gandhiji spent a major part of his life to get freedom for our country. He joined Gopala Krishna Gokhale, who was already struggling for India’s independence. During this struggle, Gandhiji has to go jail several times. He has led to many important movements such as the Quit India movement, Civil Disobedience Movement and Non-Co-operation Movement. Also, he started Dandi March or Salt Satyagraha in 1930 and walked for 400kms. Quit India was a call to Britishers, to leave India and go.

He did great works all through his life which still has an impact on the people in this modern era. He has worked with great effort to achieve Swaraj, to remove untouchability customs from society, the eradication of other social evils, empowering women’s rights, developing the economic condition of farmers and many more.

Many leaders and freedom fighters have also contributed their part in getting India’s Independence such as Azaad, Bhagat Singh, Rajguru and many more. They have fought till the death has touched their feet and taken them to heaven. In the history of India, these national freedom fighters along with Gandhiji will always be remembered. India finally got its independence on 15th August 1947 and we celebrate this day as “Independence Day”, every year.

Students can get Gandhi Jayanti Essay from here.

On 31st January 1948, Mahatma Gandhi was assassinated by a Hindu Nationalist Nathu Ram Godse, who was also a member of Hindu Mahasabha. This day has mourned the people and the whole of the country was full of sorrow.

Today, on his birthday, let us remember him and celebrate this day with joy and prosperity. His life was an inspiration for all of us and the sacrifices he made, are our responsibilities now. Let us contribute ourselves to the growth and development of our country, to pay a salute to Nation’s Father. Do not waste their efforts and struggles, by letting India go down. Even our Prime Minister, Mr. Narendra Modi has started Swach Bharat Abhiyan, to maintain the cleanliness of our society, on this very important day.

A speech is not enough to speak about Mahatma Gandhi’s values and deeds. But, we as the future of the country, can honor him by living our life with his principles of truth, peace, and non-violence and lead our country to an incredible nation.