Question 1: By what name is the parallel of latitude 23° 33′ known? Name the zones or belts into which it divides India almost equally.
Answer: Tropic of Cancer; Tropical and Temperate Zones.

Question 5: Name the mountain ranges that lie along east and west of Pamir Knot.
Answer: The Himalayas in India, Nepal and China, Arakan Yoma range in Myanmar and the Kara Koram range and Hindukush range.

Question 7: Where is Zojila Pass?
Answer: It is in the state of Jammu and Kashmir.

Question 9: Where are the Sunderbans?
Answer: The Seaward face of the delta of Ganga has sand banks and inlands known as the Sunderbans.

Question 18: What is the other name of the east coastal plain?
Answer: Coromandel Coast.

Question 19: Which is the most important lake on the eastern coastal strip?
Answer: Lake Chilka in Orissa.

Question 20: “Access through Western Ghats is difficult.” Why?
Answer: They form a continuous chain running from north to south, access through which is very difficult.

Question 2: How is Indo-Gangetic plain formed?
Answer: The Indo-Gangetic plain is formed by the Indus, Ganga and their tributaries. River Indus (2,736 km) rising from across the Himalayas winds through Pakistan and drains into the Arabian Sea. The Ganga (2,510 km) and their numerous tributaries which flow across northern India and Bangladesh drain into the Bay of Bengal.

Question 4: How are rivers of Northern India important?
Answer: (i) They yield constant supply of water.
(ii) They bring fertile alluvium soil suitable for agriculture.
(iii) They provide good highways of communication though they are much less used than formerly.

Question 5: Describe the Deccan Plateau region.
Answer: The Decean Plateau is highly dissected and is broken by hills and river valleys. It is composed of old, hard, crystalline rocks. It is bounded on the north by the ranges of Vindhyas and the Satpura, on the west by the Western Ghats and on the east by the Eastern Ghats.

Question 6: (i) Where does the Malwa Plateau lie?
Answer: (ii) How is it formed?
(i) The Malwa Plateau lies in the north-west part of the Plateau region.
(ii) This upland region is formed by sand stone, shells and limestone. It is drained by a number of north-flowing streams, like Chambal, Betwa and their tributaries.

Question 8: What is the importance of the Southern Plateau Region?
Answer: It is geologically very old and stable land and therefore least affected by the tectonic disturbances or by tremors of the earth. It is a storehouse of many mineral deposits like coal, iron-ore, manganese ore, mica, bauxite and many other minerals are found in this Plateau region.

Question 9: What is the extent of eastern coastal strip?
Answer: The east coastal strip extends from the mouth of the river Ganga to Cape Comorin. It lies between the Eastern Ghats and the Bay of Bengal.

Question 10: What is the extent of western coastal strip?
Answer: The west coast strip extends from Gulf of Kutch in the north to Cape Comorin (Kanyakumari) in the South. It lies between the Western Ghats and the Arabian Sea.

Question 11: What is the importance of coastal plains?
Answer: Both eastern and western coastal plains are favourable regions for agricultural purposes. They enjoy equable temperature condition throughout the year and as such they are suitable regions for human habitation. These plains have great facilities of good ports and harbours, also contribute greatly to the development of trade and commerce both internal and external in India.

Question 12: What are the salient characteristics of Shivaliks?
Answer: The Shivaliks, the southernmost range of the Himalayas, are also known as the outer Himalayas. This range is made of unconsolidated river deposits. It is more prominent in its western parts than the eastern parts of the Himalayas. This range is prone to landslides and earthquakes. The problem of soil erosion is worst here due to indiscriminate felling of trees.

Question 13: What do you understand by ‘Purvanchal’?
Answer: Purvanchal is a name of the mountains located on the North-eastern part of India. These mountains consist of Patkoi Bam and Naga hills in the North, Garo, Khasi and Jaintia lie in the centre and the Mizo and Lushai hills are in the south.

Question 14: (i) Define Coral Islands and Volcanic Islands.
(ii) Define Lagoons.
Answer: (i) Coral Islands: When Coral polyps die, their skeletons turn into large masses of white calcium carbonate, giving rise to white sands. Lakshadweep is coral island.
Volcanic Islands: Many of the islands of the Andaman and Nicobar are volcanic in nature.
(ii) Lagoons are salt water lakes which are almost separated from the Sea by the formation of sandbars along the coast.

Question 1: Name the rivers, falling in Arabian Sea and Bay of Bengal.
Answer: Rivers falling into the Arabian Sea: The Narmada and the Tapti rise near the eastern extremity of the Satpura hills, flow westward and fall into the Gulf of Cambay. These rivers do not form any deltas because the tides wash away all the alluvium that the rivers bring. During flood, these rivers are navigable. Their chief use is that railways have been built in their valleys.
Rivers falling into the Bay of Bengal: The Mahanadi rises in the hills of Madhya Pradesh, while the Godavari, the Krishna and the Cauvery rise in the Western Ghats and flowing eastward fall into the Bay of Bengal. All these rivers are broken by rapids and hence are not useful for navigation. The deltas of these rivers are very fertile and are irrigated by the canals taken from these rivers.

Question 2: (i) State the type of rocks found in the Plateau of Peninsular India?
(ii) Name the three important lakes of Peninsular India?
(iii) How was the Great Indian Plateau formed?
Answer: (i) Old igneous rocks and metamorphic rocks.
(ii) The three important lakes are Chilka Lake in Orissa, Kochru Lake in Andhra Pradesh and Pulicat Lake in north of Chennai.
(iii) The Great Indian Plateau is the broken part of the old land mass called Gondwanaland. It was formed at the time of the splitting and moving the land mass.

Question 3: (i) Give a brief note on Islands of India.
(ii) Where does the Lakshadweep group of islands lie?
Answer: (i) The Indian islands in the Bay of Bengal consist of the Andaman and the Nicobar groups. Some of which are of volcanic origin. There are about 200 Islands in the Andaman groups alone, extending for 350 kilometres and 19 islands in the Nicobar group. Some of the Islands extend from 60 to 100 km., forming a cluster south of the Andaman group.
The Arabian Sea Islands consist of the Lakshadweep group. They are formed on a coral deposit of the Kerala coast. The southernmost of these lies just to the north of the Maldives Islands which constitute an independent territory.
(ii) The Lakshadweep group of Islands lie in the Arabian Sea, about 300 kilometres away from the Kerala coast. They are coral Islands. Kavaratti, the Amindivi and Minicoy are the most important Islands of Lakshadweep group of Islands.

Question 4: What, has been the influence of the Northern Mountain Wall on the Indian Sub-continent?
Answer: (i) Since historic times, the movement of the people across the Himalayas has been limited. This helped in the development of a distinct culture of its own.
(ii) It prevents the cold winds coming from Central Asia to India.
(iii) Monsoon winds which scale the heights along the Himalayas cause rainfall in the Indian sub-continent.
(iv) The glaciers and snow fields of the Himalayas are the source of a large number of perennial rivers.
(v) Heavily forested slopes of the Himalayas provide valuable timber and other useful forest products.
(vi) The Himalayas give shelter to a wide variety of wild animal life. Thus, it maintains the balance in ecosystem.

Give Geographical Reasons for the following:

Question 1: Give reasons to justify that the Himalayas act as a ‘climatic divide’.
Answer: Himalayas are important for various reasons:
(i) It is the natural barrier.
(ii) Gives origin to great rivers of north India.
(iii) Is a source of timber and herbal products.
(iv) Acts as a barrier for the rain bearing winds of the Indian Ocean inducing them to give rain.
(v) It shuts off the cold winds of Central Asia.

Question 3: The Peninsular rivers not navigable.
Answer: They are not suitable for navigation as they are shift flowing and non-perennial.

Question 5: “Less land is available for agriculture on the west coast than on the east coast.” Why?
Answer: Western Ghats are high and steep and all along the western coasts there are numerous streams with small catchment areas. There are also a number of lagoons, backwaters and small lakes.

Question 6: Why does ‘The Narmada and Tapti do not form Deltas’.
Answer: They have a short mountain stage and flow on a rugged and rocky slope.

Question 7: Why is ‘The Delta region of the Indus is largely a waste land.’
Answer: It is usually flooded with brackish water. Brackish water is not suitable for agriculture or of any use.

Question 2: Delta and an estuary.
Answer: 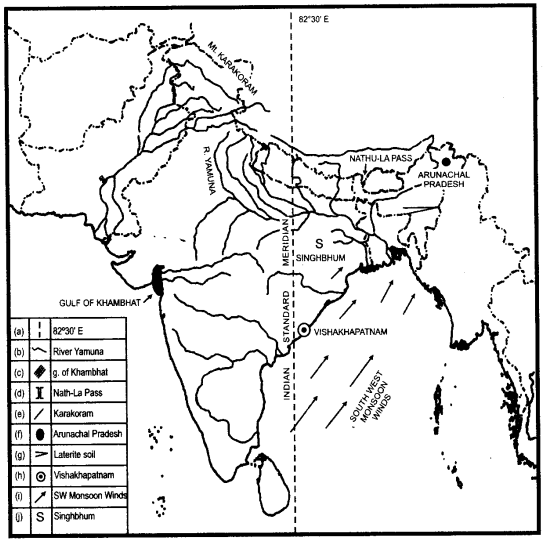 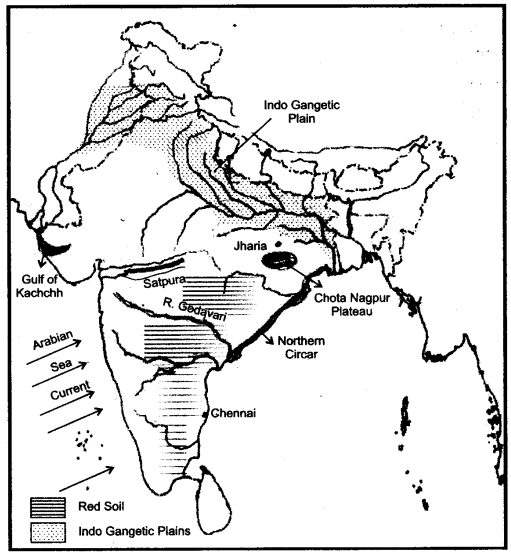 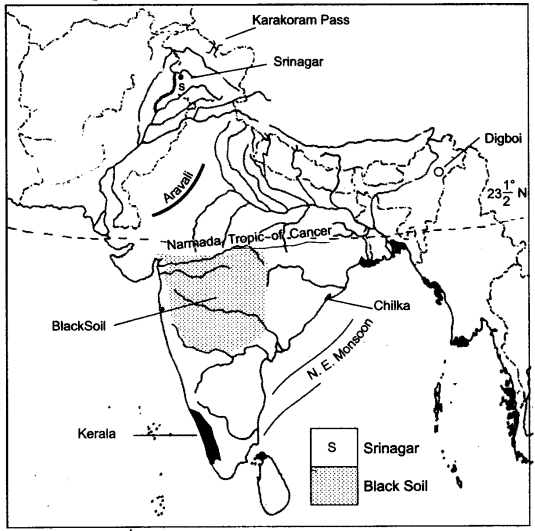 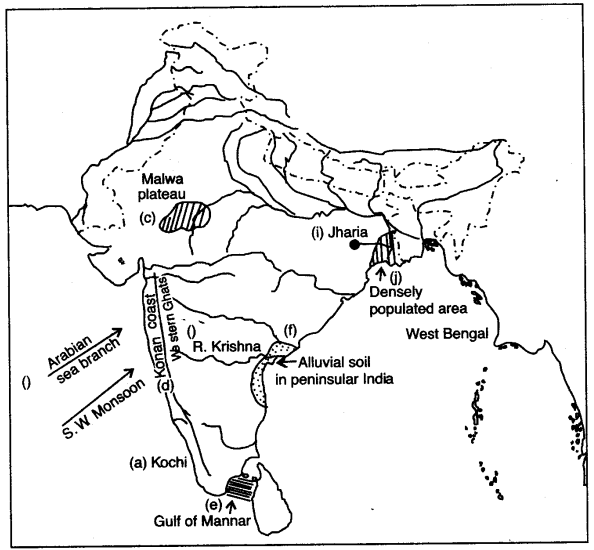 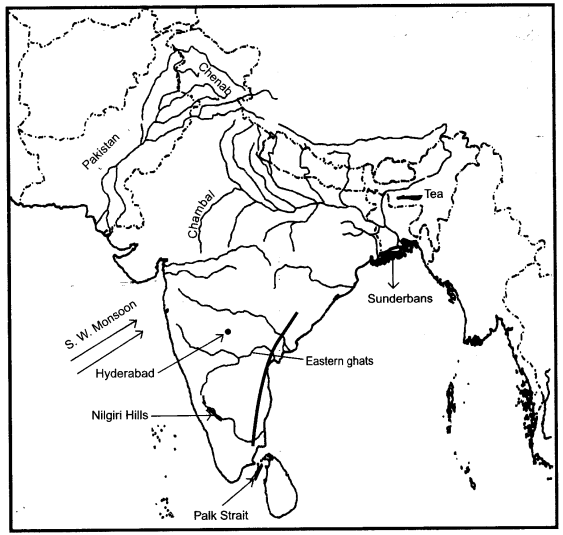 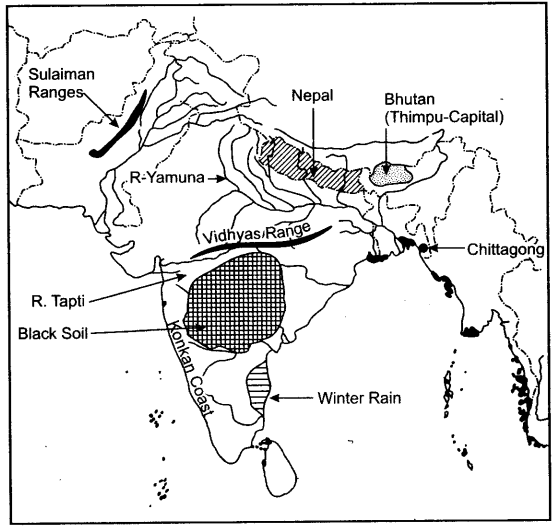 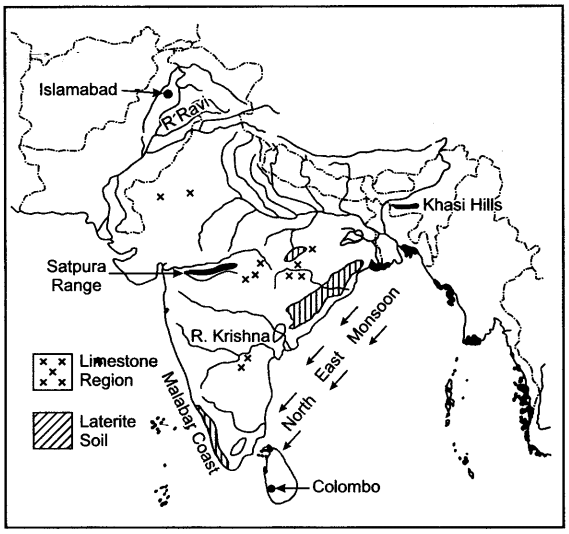 Question 8: On the outline map of the Indian sub-continent provided to you at the end of this question paper:
(i) Mark with a bold line and label:
(a) The Karakoram Range.
(b) The Eastern Ghats.
(c) The Nilgiris
(ii) Shade and name one region for the : Black soil.
(iii) Mark and label:
(a) The Khyber Pass
(b) The capital city of Assam.
(c) River Godavari.
(iv) (a) Identify, shade and name:
(1) A region of sparse population (less than 50 pp sq.) in North-Eastern India.
(2) A region of ‘Equatorial Forests’.
(b) Mark with one long arrow, the direction of the Summer Monsoon over the Bay of Bengal.
Answer: 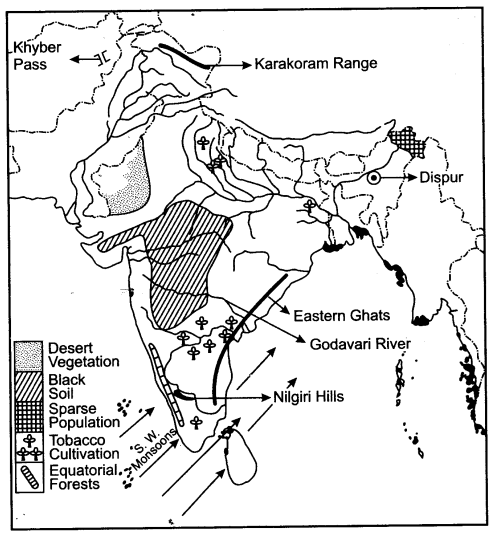 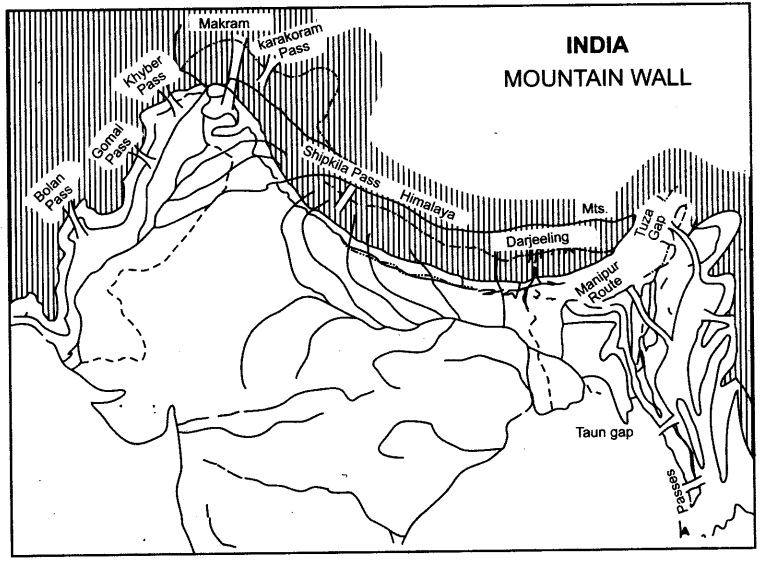 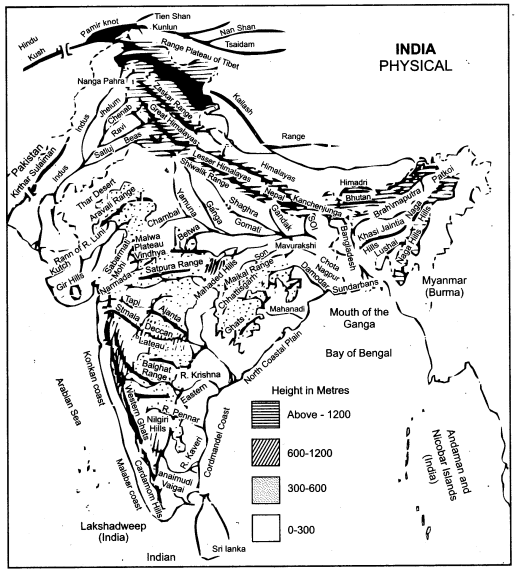 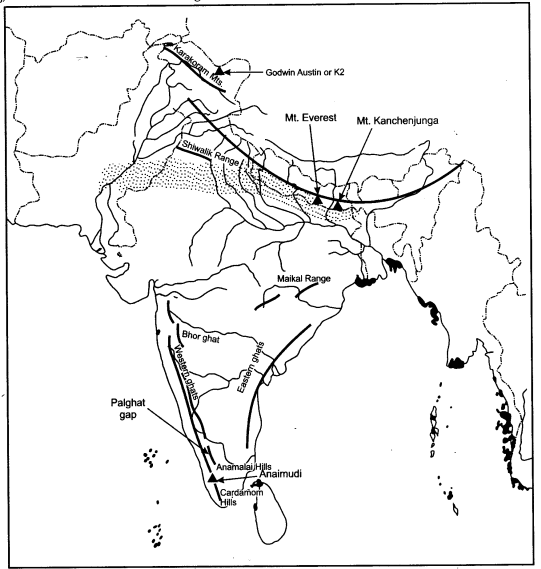 Question 12: One the map of India:
(a) Label the rivers: Mahanadi, Kaveri, Chambal, Betwa.
(b) Show by an arrow and name the Gulfs: Khambat, Kutch, Mannar
(c) Name the Lakes: Chilka and Pulicat.
(d) Write in bold letters Bay of Bengal, Arabian Sea, Indian Ocean in their appropriate places.
Answer: 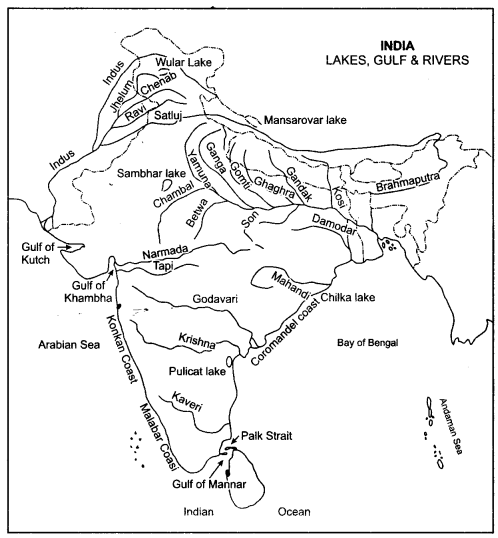 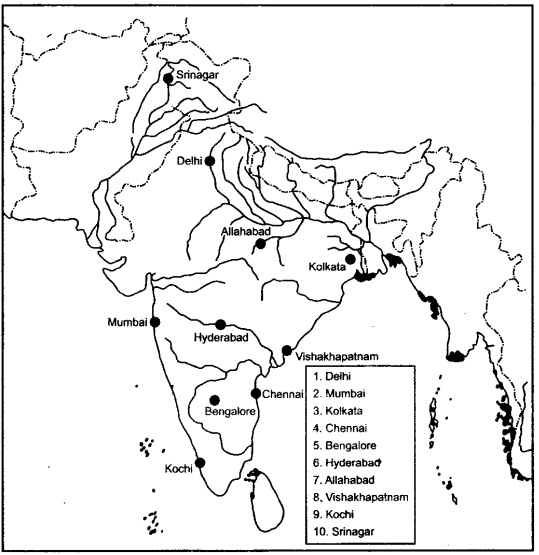 Question 1: (i) Which is the biggest country of South Asia with regard to area?
Answer: (ii) Name the largest country with regards to its population.
(i) India, (ii) India.

Question 6: ‘India is bounded on three sides by the Sea’. Name them.
Answer: India is bounded by the Arabian Sea in the west, the Bay of Bengal in the east and in the south the Palk Strait separates India from Sri Lanka.