Question 1: What is a gene ? How is it related to heredity ?
Answer: Genes are hereditary units located on a chromosomal thread. A gene can be defined as “ultimate unit of recombination, mutation and self-reproduction”. They are responsible for various characteristics externally shown by the plants and animals. A single gene may affect one or more characteristics of offsprings.

Question 2: Define mutation and give its significance.
Answer: Any change in genetic composition of an individual brought about by internal or external factors is called mutation. Mutation play a significant role in the evolution and speciation because they cause variability. However, some harmful mutations cause diseases.

Question 5: Define Mendel’s law of segregation.
Answer: Law of Segregation or the law of purity of gametes : The two members of a pair of factors separate during the formation of gametes. They do not blend but segregate or separate into different gametes. The gametes combine together by random fusion at the time of zygote formation. Question 6: What is monohybrid cross ? How did Mendel performed this cross ?
Answer: Monohybrid cross : It is a cross where two forms of a single trait are crossed or hybridized.
Mendel performed this experiment on pea plant. He crossed the true breeding forms of tall and dwarf plants and obtained the hybrid progeny. This is called as first generation (F1) offspring plant to self-pollinate and produced the second generation (F2).

Question 7: A certain couple got four daughters in a sequence and no son. Does it mean that the husband does not produce Y-chromosome bearing sperms ? Explain.
What is the chance of this couple having a daughter ?
Answer: Daughter or son is a matter of chance for Y- or X-chromosome carrying sperm to fertilize the egg. It is always 50% The couple got four daughters as a matter of chance encounter of the X-chromosome carrying sperm fertilizing the eggs. The chance of the couple getting another daughter is again 50% (so is for the son).

Question 8: Mutation alerts the hereditary material. Give reasons.
Answer: Mutation alerts the hereditary materiel of an organisms cell and result into change in certain characters of traits. For example:
(a) Sickle-cell anemia, is a blood disease caused by gene mutation. The mutation causes change in the DNA which controls productivity of RBCs.
(b) Radioactive radiations also alter the gene structure and their effects can be seen generation after generation.

Question 9: Why do men suffer from haemophilia and colour blindness ? Under what conditions do women suffer from these disorders ?
Answer: Haemophilia and colour blindness are sex-linked disorders, caused by recessive genes located on X-chromosome. These disorders occur more frequently in men because males are heterozygous for the defect. They have one X-chromosome and one Y-chromosome. Y- chromosome does not carry alleles for these traits, therefore the recessive genes are able to express even in single dose.
Females have two X-chromosomes therefore both the alleles have to be present in recessive form to be able to be expressed. Thus, females suffer only if they are homozygous for the trait which is possible only when a carrier or sufferer female marries a sufferer male.

Question 1: Law of independent assortment holds good for the gene pairs that occur in different pairs of chromosomes.
Answer: It is chromosome and not the individual gene which segregate during gamete formation.

Question 2: Heritable variations are called genetic variations.
Answer: Because these variations arise due to change in the genetic material of germplasm or gametes.

Question 3: Discontinuous variations are inheritable.
Answer: Because these are produced by the effects of environment.

Question 4: Why X-linked recessive diseases are more common among males than females.
Answer: Because females have two copies of the X-Chromosome and males have only one X- chromosome.

Question 6: Haemophilia shows criss-cross inheritance.
Answer: The gene that causes haemophilia is recessive and lies in the X-chromosomes. 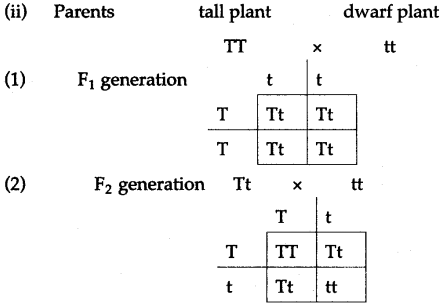 Question 2: Write a short note on sex determination in man.
Answer: The difference between two individuals of same species with respect to heredity is known as sex. So, an individual can either be a male or female in normal circumstances. Scientists have discovered that sex is transmitted by definite sex- chromosomes, also called heterosomes. The human body cells have two sex- chromosomes. A woman has two X- chromosomes while a man has one X- chromosome and one Y-chromosome. 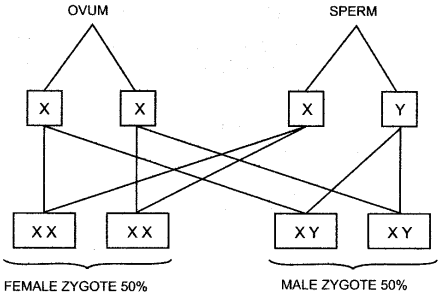 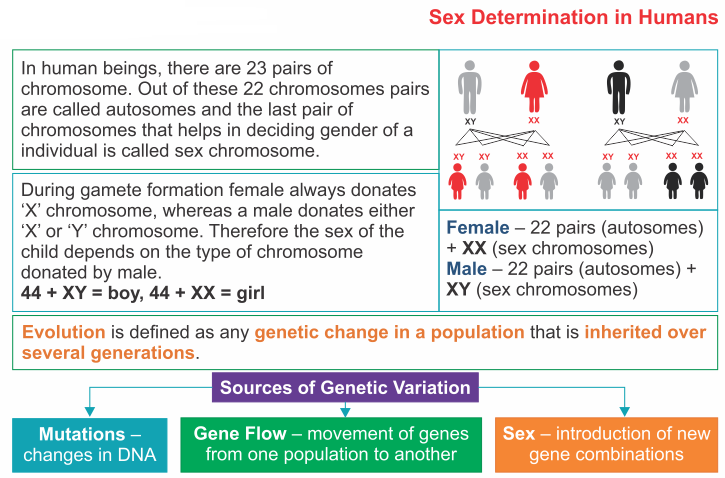 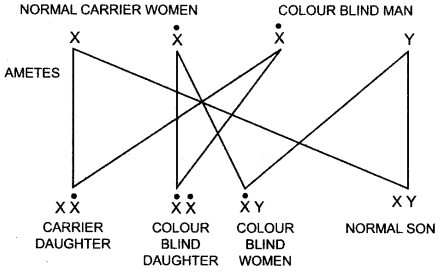 Since the man in the second marriage was colourblind.
Genotype of that man: XY
Possible combination of this marriage. 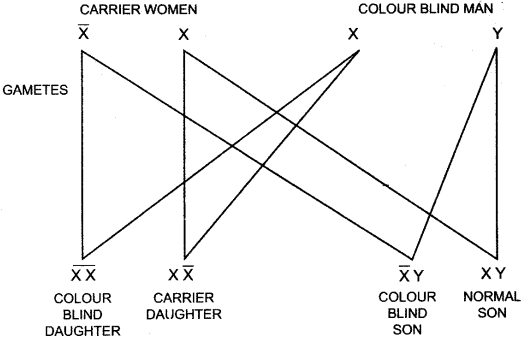 Question 7: (i) State Mendel’s law of Independent Assortment.
(ii) A homozygous Tall plant (T) bearing red coloured (R) flowers is crossed with a homozygous Dwarf plant (t) bearing white flowers (r):
(1) Give the Genotype and Phenotype of the F2 generation.
(2) Give the possible combinations of the gametes that can be obtained from the F2 hybrid.
(3) Give the dihybrid ratio and the phenotype of the offsprings of the F2 generation when two plants of the F1 generation above are crossed.
Answer: (i) Mendel’s law of independent assortment, states that in a dihybrid cross, the alleles of one pair segregate independently of the alleles of other pair at the time of gamete formation and the gametes assort independently at the time of zygote formation. Thus, inheritance of one ; character does not interfere, the inheritance of other character.

Question 8: A haemophilic man marries a carrier women. Find out the probability of their offsprings being haemophilic.
Answer: The gene of haemophilia is present on X-chromosome. This disease is only found in males and females can only act as carriers.

Question 9: Given below is a schematic diagram showing Mendel’s Experiment on sweet pea plants having axial flowers with round seeds (AARR) and Terminal flowers with wrinkled seeds (aarr). Study the same and answer the questions that follow :

Question 10: (a) Given below is a schematic diagram showing Mendel’s Experiment on sweet pea plants having axial flowers with round seeds (AARR) and terminal flowers with wrinkled seeds (aarr). Study the same and answer the questions, that follow :

Question:
1. Heredity
2. Variation
3. Dominance
4. Linkage
5. Mutation
6. Crossing-over
7. Heterosome
8. Recessive character
9. Genotype
10. Alleles
Answer: 1. Heredity: The process of transmission of parental characters to the progeny through the generations.
2. Variation: Occurrence of differences in progeny of same parents and individuals of same species.
3. Dominance: The character expressed in first generation when any two individuals of contrasting characters breed is dominant and the phenomenon is called dominance.
4. Linkage: The phenomenon of inheritance of a group of genes together through some generations.
5. Mutation: Any change brought about into the genetic composition through external or internal factors.
6. Crossing-over: The phenomenon of the exchange of genetic material between two non¬sister chromatids.
7. Heterosome: Chromosome found in reproductive cell and which are responsible for the sex of a child.
8. Recessive character: The character which remains hidden in F1 generation and expressed in the second-generation in the ratio of 1:2:1.
9. Genotype: The genetic composition of any organism is called genotype.
10. Alleles: Alleles are the alternative forms of the same gene. For example, tallness and dwarfness are the two alternative forms of a gene for height and are called alleles. Similarly, attached ear lobes and free ear lobes are alleles for the type of ear lobes.

Question:
1. The study of heredity and variation.
2. Cells having a single set of chromosomes.
3. The genetic composition of an organism.
4. Pairs of chromosomes, present in human egg cells.
5. Number of chromosomes present in human gametes.
6. The diploid number for cell of man.
7. Chromatids where Recombination of characters occurs.
8. A specific part of chromosome that determine hereditary characteristics.
9. The pattern of arrangement of genes along a chromosome.
10. Pair of genes responsible for a particular characteristic.
11. The type of gene, which in the presence of a contrasting allele is not expressed.
Answer:
1. Genetics
2. Haploid
3. Genotype
4. 23
5. 23
6. 46
7. Non-sister chromatids
8. Gene
9. Linearly
10. Alleles
11. Recessive

Question:
1. Transmission pf characters through generations.
2. Differences occurring within offsprings of the same progeny.
3. Cell organelle directly involved in genetics.
4. Cell which determines the sex of a baby.
5. A virus with DNA as heredity material.
6. The hereditary unit, which is responsible for inheritance.
7. Transmits characteristics from parents to offsprings.
8. The individual having similar pair of genes.
9. The individuals having dissimilar pair of genes.
10. The ratio of offspring on F2 generation in a dihybrid cross.
11. A single egg was fertilized by a single sperm. But twins derived from that egg were born. What is the name of such type of twins ?
12. A twin consisting of a brother and a sister were bom to a lady. What is the name of such a type of twins ?
13. Name a genetic disease in which a person cannot distinguish red and green colour.
Answer:
1. Heredity
2. Variation
3. Nucleus
4. Sperm cell
5. Retro virus e.g. HIV
6. Gene
7. Genes
8. Homozygous
9. Heterozygous
10. 9 : 3 : 3 : 1
11. Identical or monozygotic twins
12. Non-identical or fraternal twins
13. Colour blindness

Fill in the Blanks

Complete the following sentences with appropriate words :
1. The chromosomal theory of inheritance was proposed by Sutton and Boveri in 1902.
2. Gene is the hereditary unit.
3. In mammals, the female is homozygous while the male is Heterozygous.
4. A chromosome is composed of 50 % DNA and 50% histone.
5. Gregor John Mendel is the Father of Genetics.
6. The number of chromosomes in human is pairs/46.
7. The physical expression of genes is called Phenotype.
8. The small differences among individuals are called Variations.
9. The dissimilar pairs of genes present in an individual are known as Heterozygous.
10. Autosomes chromosomes do not take part in sex determination.
11. Alleles are the alternative forms of a gene producing different effects.
12. 9 : 3 : 3 : 1 is the ratio of dihybrid cross.
13. A character that is supressed is Recessive.
14. Upon Fertilization the diploid condition is restored.

Mention, if the following statements are True or False. If false rewrite the wrong statement in its correct form:
1. Most genetic diseases in man are recessive in character. (True)
2. DNA has a double helical structure. (True)
3. Genes are responsible for genetic characters. (True)
4. Linkage is a permanent feature of few genes. (True)
5. Mutation can be brought about artificially. (True)
6. A female is responsible for the sex of the progeny. (False, Male is responsible for the sex of progeny.)
7. Mendel experimented upon plants of Oryza sativa. (False, Mendel experimented plants of Pisum sativum.)
8. Male act as carrier for colourblindness. (False, Female acts as carrier for colour blindness.)
9. Females are more affected by sex-linked genetic disorders. (False, Males are more affected by sex linked genetic disorders.)
10. Colour blindness is a Y-linked character. (False, Colour blindness is a X-linked character.)
11. Haemophilia exhibits X linked inheritance. (True)
12. A colourblind male cannot distinguish any colour. (False, A colour blind male cannot distinguish red and green colour.)
13. Cancer is a genetic disorder. (False, Cancer is not a genetic disorder.)

Write the functional activity of the following structures:

Choose the Odd One Out

2. Who among the following is called father of genetics?
(a) Mendel (b) Darwin
(c) Watson and Crick (d) Lamarck

3. When an individual has both tle genes of a contrasting character, it is said to be:
(a) Homozygous (b) Heterozygous
(c) Phenotype (d) Genotype

4. When two individuals differing in at least one character are crossed, the process is known as:
(a) Hybridization (b) Selection
(c) Pedigree (d) None of these