What Determines the Gender of the Child

Determination of the Sex of a Baby

Do you know what determines whether the baby developing inside the mother’s womb is a boy or a girl? This is determined by chromosomes, the thread-like structures found inside the nucleus. Chromosomes carry information in the form of genes. Each cell contains 23 pairs of chromosomes, including one pair of sex chromosomes. There are two types of sex chromosomes, X and Y, named after their shapes. Female cells contain the XX pair while male cells have the XY pair. 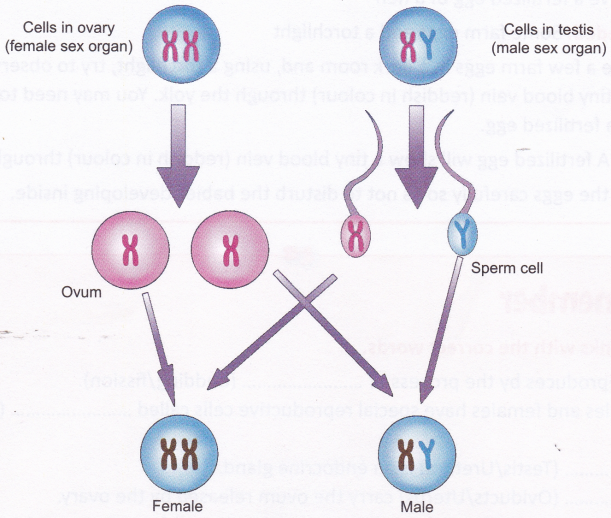 Baby Inside the Womb

When the fertilized egg reaches the uterus, it implants itself there. During the first eight weeks after fertilization, the baby is called the embryo. From eight weeks after fertilization till birth, the developing baby is called the foetus. The baby stays and grows inside the mother’s womb (uterus) for about 40 weeks to develop fully. When the foetus is fully developed, the mother gives birth to the baby.

A newborn baby is very small and is unable to look after itself. The mother nurses the baby on her milk, which helps it to grow and develop resistance to diseases. A newborn baby depends on people around it for all basic needs and, therefore, requires a lot of care. A baby also needs to be vaccinated against diseases right from birth.

Even though we are living in the 21st century, some people still consider the female child to be a burden. Techniques like ultrasound, which enable doctors to determine the sex of the unborn child, are being misused by such people for killing the girl foetus using a technique called abortion. To put a stop to female infanticide (killing of girl foetus), the government has made it illegal to find out the sex of the foetus. Even then, issues like lack of basic education for girls and early marriage and motherhood continue to persist, especially in developing countries.
Many people blame the mother for the birth of a girl child. Such thinking is scientifically baseless. As we discussed earlier, the sex of a child is determined by the father’s sperm (which carries either the X chromosome or the Y chromosome). Many such gender myths continue to be prevalent. These can only be dispelled by providing basic education to people.

Each year, about 16 million children are born to girls in the 15-19 year age group worldwide.
Since girls are not physically and mentally prepared for motherhood at such an early age, adolescent pregnancy is dangerous to both the mother and the child. Besides posing health problems, early marriage and motherhood also restrict educational opportunities for girls.