Question 4: What is a census ? Why is it important ?
Answer: A census is.taken in India every ten years by the government to count the number of people in the country. The census is important to estimate the death rate and growth rate of the population of a country.
A census is the counting of the existing population at a fixed time as regards name, age, sex, occupation, date of birth, matrimonial status, number of dependents in a family, race, religion, language spoken, residence etc.

Question 10: Write some major disadvantages of large family.
Answer: The main disadvantages are:
(i) The children are not able to get good variety and proper quantity of food resulting in malnutrition and deficiency diseases.
(ii) The mother will have poor health for which she can’t look after the children properly.
(iii) There will be a high economic pressure on father’s income.
(iv) The children won’t get proper education and medical facilities due to lack of money.
(v) The problem of houses which are not well-ventilated or properly cleaned where the growing children will have the ill health.

Question 11: Write briefly the need to control population (any four points).
Answer: The needs to control population are:
(i) The number of people are increasing in geometrical progression.
(ii) It is leading to great economic pressure on the parents which is affecting their quality of life.
(iii) There is struggle for existence.
(iv) Proper medical facilities are not available.

Question 14: Explain briefly the relation between poverty and population.
Answer: The poorer and lower classes of people feel that children will be able to supplement the income of the parents by working. The more children, the more will be the income of the family.
Infant mortality is very high among the poor people because the mother do not receive pre-natal and anti-natal care. Further, many children die at an early age. This high infant mortality causes many of the poor to have more children so that some of them may survive.

Question 15: How is the electronic media educating people about the importance of small families ?
Answer: The electronic media such as Radio and Television convey the message of family planning to the citizens everyday. The newspapers also provide the daily increase in the population of India to tell us about the danger and seriousness of population explosion.

Question 16: Mention three steps to control the increasing human population in India.
Answer: Three steps by which the increasing human population can be controlled, are:
(i) Family Planning : There can be a decrease in birth rate by voluntary family planning aided by incentives. The methods include sterilization, use of contraceptives, use of pills, drugs and abortions.
(ii) Education of the people about small family norms and its benefits.
(iii) Raising the age of marriage to 18 in girls and 21 among boys.

Question 17: How is human population checked at present ?
Answer: At present human population is checked by disease, death due to old age, wars, epidemics, natural calamities such as earthquakes and floods and also by family planning methods.

Question 19: (i) Describe the four methods of birth control practiced in India.
(ii) Name two surgical techniques (for man and woman) to prevent pregnancy.
Answer: (i) The four methods of birth control are :
(a) Vasectomy: This involves the breaking of the contact between the sperms and ovum, by cutting the vas deferens or sperm duct which carries sperms from the testes to the outside in the man. It prevents pregnancy.
(b) Tubectomy: Severing and sealing off the fallopian tubes so that the mature ovum may not come in contact with the incoming sperms.
(c) Contraceptives: Loops, condoms, creams, etc., are used as contracetive which keep away sperms from meeting the ovum.
(d) Voluntary methods: Which include : (a) avoiding from sexual intercourse during the unsafe period of ovulation, (b) Frequent use of contraceptive.
(ii) For man—Vasectomy and contraceptive, For woman—Tubectomy and pills.

Question 20: What are the problems faced by India owing to the ‘population explosion’ ?
Answer: Consequences of ‘population explosion’ in India:
(i) Scarcity of food, space and water: Although the population is growing rapidly the living and food, space, production available per person has remained constant.
(ii) Increase in epidemics a (id diseases as a result of unhygenic and crowded living conditions in cities, towns and villages.
(iii) Unemployment and poverty will be uncontrollable and may lead to social unrest and lack of educational facilities.
(iv) Destruction of forests and their fauna and flora so that more land can be brought under cultivation or for human dwellings.
(v) Problems of sanitation, cleanliness and clean drinking water for the increasing population.
(vi) Lack of facilities such as schools, colleges, hospitals, transportation, etc.
(vii) Non-renewable resources such as coal, oil, water, minerals, etc., will be consumed very quickly.
(viii) Disturbances in ecological balance due to deforestation and pollution.

Question 21: State two methods of contraception, one a barrier method and one which is not a barrier method. For each method named give two advantages and one disadvantage of the method.
Answer: A barrier method—the condom.
Non-barrier—the contraceptive pill.
Advantages of the condom include the fact that it is readily available, needs no medical supervision, can help reduce the transmission of venereal diseases. A disadvantage is that it is not the most reliable method. Advantages of the contraceptive pill are that it is highly reliable if taken according to instructions and that a woman can take responsibility for her own fertility. A disadvantage is that it should be taken under medical supervision as there is a small risk of side effects.

Question 1: Birth rate is high in India.
Answer: (1) Most of rural population which forms the bulk of our society are illiterate, ignorant and superstitious.
(2) Children are considered to be the helping hand to increase the family income.

Question 1: Observe the diagram A and B given below: 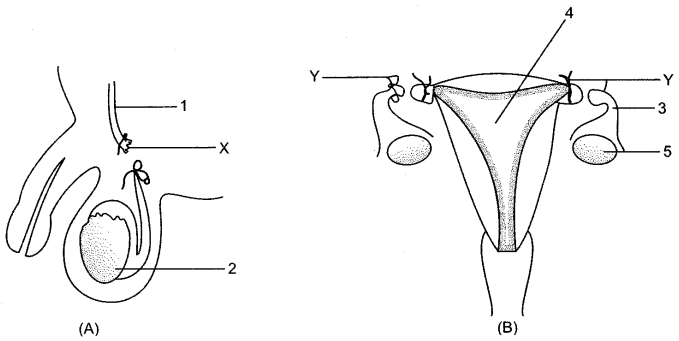 (i) Label parts 1 – 5.
(ii) What does diagram A depict?
(iii) What does diagram B depict?
(iv) What comment on X and Y.
(v) State one function each of part 2 and 4.
Answer: (i) 1. Vas deferens
2. Testis
3. Oviduct
4. Uterus
5. Ovary.
(ii) Diagram A depicts vasectomy in males (i.e., cutting and tying the vas deferens).
(iii) Diagram B depicts tubectomy in females (i.e., cutting and typing the oviducts).
(iv) ‘X’ represents the cut and tied end of vas deferens in male. Cutting and tying of vas deferens prevents the passage of sperms and avoids pregnancy. ‘Y’ represents the cut and tied ends of oviducts of female. Cutting and tying of oviducts prevents the passage of ovum and avoids pregnancy.
(v) Part 2 (Testis) produces sperms (male gametes).
Part 4 (Uterus) carries and protects the foetus till its birth.

Question:
1. A group of organisms of the same species living in a geographically localized area and capable of interbreeding.
2. The size of a population in relation to per unit area at a given time.
3. Changes that occur in population due to alteration in mortality, sex ratio, age groups.
4. Another term for birth rate.
5. The addition of new individuals to the population from other localities is called.
6. No. of deaths per 1000 people per year.
7. The cutting and ligation of vas deferens in males.
8. Name any two Non-renewable resources of energy.
9. Name any two renewable resources for the mankind.
Answer:
1. Population
2. Population density
3. Population dynamics
4. Natality
5. Immigration
6. Mortality
7. Vasectomy
8. (i) Minerals, and (ii) Fossil fuels
9. (i) Solar Energy, and (ii)%Water

Question:
1. A statistical study of human population of a region.
2. The number of individuals belonging to different age groups.
3. The comparative number of males and females in a population.
4. The rapid increase in population.
5. What is the present population of Delhi, India and the world ?
6. The technical term used for the difference between birth rate and death rate in population.
7. The zoological name of man.
8. The surgical removal of testes.
9. Write the full form of MTP.
10. The methods to prevent union of sperms with the ovum.
11. The number of individuals going out from a population to join another one in a new locality resulting in the decrease of the original population.
Answer:
1. Demography
2. Age ratio
3. Sex ratio
4. Population explosion
5. More than 10 million, 1000 million (1 billion) and 6 billion
6. Growth rate of population
7. Homo sapiens
8. Castration
9. Full form of MTP: Medical Termination of Pregnancy.
10. Contraceptives
11. Emigration

Fill in the Blanks

Complete the following sentences with appropriate words :
1. World population in 1994 was 5-6 billion.
2. Total population in India in 1999 was 100 million.
3. The population of whole of Asia beyond 2001 AD is expected to be 13 billion.
4. Another terni for birth rate is Natality.
5. Population increases in Geometric ratio while food production increases in arithmetic ratio.
6. Minerals are resources of Non-conventional energy.
7. The sign of family planning in India is Inverted Red triangle.
8. Pregnancy can be avoided by using Contraceptive pills.

Choose the Odd One Out

4. Which one of the parents is biologically responsible for sex of thechild?
(a) Father (b) Mother
(c) Both the parents, (d) Supernatural power

7. Which mechanical means is used to cover the penis before coital activity?
(a) Diaphragm (b) Condom (c) Loop (d) Copper-T