What are the Sources of Energy?

If energy can neither be created nor destroyed, we should have no worries! We should be able to perform endless activities without thinking about energy resources then why we speak to save energy ?
Its because energy from the usable form, is dissipated to the surroundings in less usable forms. Hence, any source of energy we use, to do work, is consumed and cannot be used again.

A good source of energy would be one

Sun “The Ultimate Source Of Energy”

The source of the large amount of solar energy is due to fusion of lighter nuclei. About 90 percent of the solar mass is composed of hydrogen and helium and rest 10 percent contains other elements. The temperature of the interior of the sun is estimated to be about 2 × 107 K.
The nuclei of hydrogen fuse together in the sun’s interior to produce helium and a huge amount of energy is released. It is estimated that 1g of hydrogen produces 620,000 million joules of energy.
The fusion process in the sun can be described by the equation.
\(4_{1}^{1}H\text{ }\to \text{  }_{2}^{4}He\text{   +   2 }_{+1}^{0}e\text{   +  Energy}\) 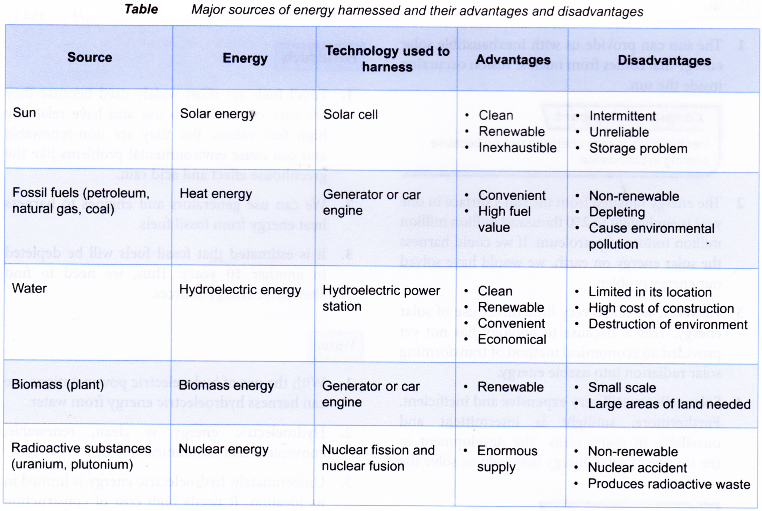 Exploiting any source of energy disturbs the environment in some way or the other. In any given situation, the source we would choose depends on factors such as the ease of extracting energy from that source, the economics of extracting energy from the source, the efficiency of the technology available and the environmental damage that will be caused by using that source. Research continues in these areas to produce longer lasting devices that will cause less damage throughout their life.

we cannot depend on the fossil fuels for much longer. Such sources that will get depleted some day are said to be exhaustible sources or non-renewable sources of energy. On the other hand, if we manage bio-mass by replacing the trees we cut down for fire-wood, we can be assured of a constant supply of energy at a particular rate. Such energy sources that can be regenerated are called renewable sources of energy.
Renewable energy is available in our natural environment, in the form of some continuing or repetitive currents of energy, or is stored in such large underground reservoirs that the rate of depletion of the reservoir because of extraction of usable energy is practically negligible.