What is Nuclear Energy?

What is nuclear fission and how does it occur? 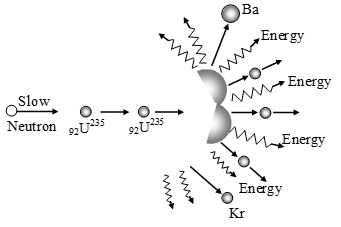 How is energy released in a nuclear fusion reaction?

What is the difference between fission and fusion?

What happens in a nuclear chain reaction?

Energy in a Nuclear Reaction

Energy Released in an Alpha Decay

Energy Released in a Beta Decay

(A) Nuclear Bomb
This produces tremendous amount of destructive energy. This energy is produced by uncontrolled nuclear fission chain reaction.
The atom bomb or nuclear bomb produces large amount of energy when two pieces of uranium (U235) or Plutonium (Pu239) are brought in contact so that the total mass become greater then critical mass.
During this process a very high temperature of the order of million degree kelvin is produced and also a very high pressure of the order of several million atmosphere is developed.
(B) Hydrogen Bomb
It produces extremely high destructive energy by using nuclear fusion. The fusion reaction is performed over heavy–hydrogen nuclei at very high temperature and pressure.
To get this high temperature and pressure, nuclear fission bomb is used at the centre core of a hydrogen bomb which is formed of heavy hydrogen like lithium hydride (LiH2).