Seasons in India Essay: Seasons are reminders that change is an essential part of our lives.  Where other parts of the world are enjoying four seasons, India is blessed with predominantly six seasons.

According to the traditional theory of the ancient Hindu calendar, the twelve months of a year are equally divided into two months each for every season. According to the Sanskrit terms, the spring season is Vasantha Ritu, the summer season is grishma ritu, the monsoon season is varsa

Ritu, the autumn season Sharada Ritu, the winter season is hemanta ritu, and the prevemal season is shishira ritu. These seasons have been derived from the astronomical division.

There are two kinds of essays according to the different age groups of children. Seasons in India long essay consists of 400 – 500 words whereas Seasons in India short essay is 150 -200 words.

Long Essay on Seasons in India in English 500 Words

India is a vast country and has diverse climatic conditions. Different parts of the country experience different temperatures and climate depending on several factors such as topography, altitude, latitude, and longitude. The astronomical calendar of Hindu denotes six seasons, namely, spring season, summer, monsoon, autumn, winter, and reveal season. However, the meteorological department of India broadly classifies the seasons in India into four, namely, summer, monsoon (or rainy season), post-monsoon, and winter season.

The summer season in India is the longest season. It begins in the month of March and extends until the end of June. Flowers begin to bloom during March. Garden and parks are covered with colorful flowers. India has a tropical climate. Thus, most of the regions experience a harsh climate during these months. The sun shines brightly and the temperature soars. The maximum recorded temperature in India is around 50 degree Celsius and the minimum temperature is 32 degree Celsius during summer months.

Furthermore, strong and hot winds blow, which adds difficulties to people living in India. Children enjoy summer vacations during May and June when the heat is at a peak. Usually, the nights are shorter and days are longer during the summer season.  People try to keep themselves cool by wearing light cotton clothes and staying indoors. Eating fresh fruits and vegetables helps in the proper functioning of the digestive system.

India is heavily dependent on monsoon rain for cultivation.  It replenishes the groundwater reserves and fills up dry lakes and rivers.  Monsoon season begins in the last week of June or the first week of July and continues till September. The rainy season or the monsoon season brings respite to Indians, particularly, the farmers. The monsoon showers cool down the earth. It is extremely helpful in the irrigation of crops. A good monsoon rain helps in the high production of Kharif crops. The monsoon clouds originate in the Arabian Sea and the Bay of Bengal. The southern part of the country experiences the first precipitation. Some parts of the country often have to deal with flooding due to heavy downpour.

Towards the end of November, nights are longer and day becomes shorter. Winter seasons in India has a span of two to three months. The temperature begins to dip from the first week of December and extends till the last week of February. Some parts of the country experience extremely cold weather whereas other regions near the seashore enjoy the warm and pleasant climate. The northern part of the country is the coldest. Some areas at high altitude experience snowfalls. The minimum winter temperature in India ranges between-15 degrees Celsius and 10 degrees Celsius. People wear woollen clothes to keep themselves warm. Towards the end of February, the weather becomes pleasant in most parts of the country. 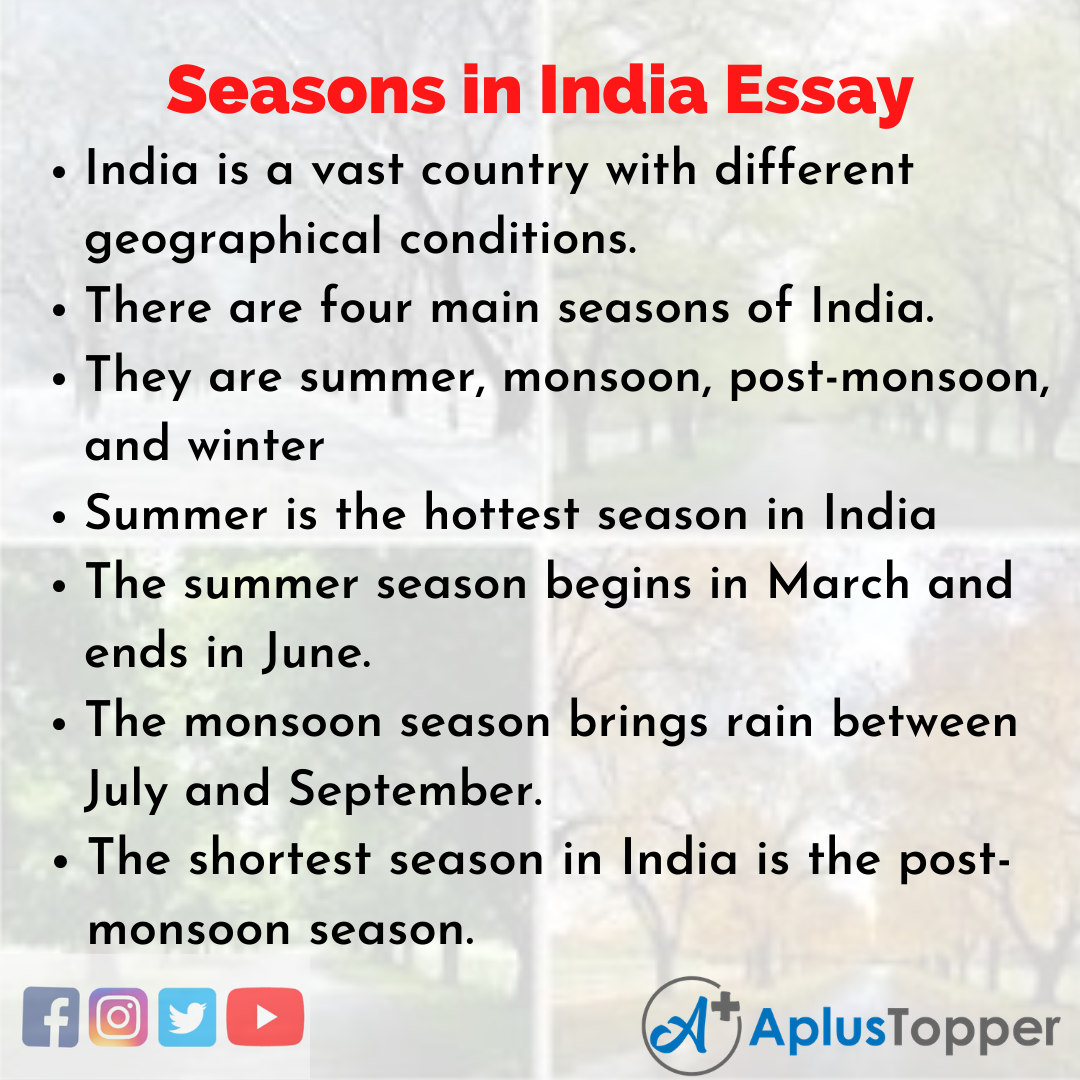 Short Essay on Seasons in India in English 200 words

The brief essay on seasons in India is in English for kids up to Class 6. Furthermore, this essay can be very helpful for students who are preparing for their unit tests and other examinations.

The summer season in India begins from March and ends in June. Summer happens to be the hottest season in the country.  The sun shines brightly and hot winds blow during the day. People should keep themselves cool by drinking plenty of water and eating juicy fruits.

The monsoon season starts in July and ends in September. The fresh raindrops put an end to the heatwave.  The rain washes away the dust and cleans the atmosphere. Farmers are happy to receive the monsoon rain as it helps them in providing water to the crops.

The post-monsoon season is for a brief period. After the monsoon ends, post-monsoon starts in October and ends in November.  During this time, the weather is pleasant.

The winter season starts in December and ends in February. January is very cold. People wear a jacket, sweaters, gloves, and caps to keep themselves warm.

10 Lines on Seasons in India Essay in English

Conclusion on Seasons in India Essay

Essay writing has many benefits. If you are a student, you need a regular practice of essay writing.  Seasons in India Essay is very useful for students. You can use these points to suit your requirements.

FAQ’s on Seasons in India Essay

Question 1.
How many seasons in India?

Question 2.
Which is India’s hottest season?

Answer:
Summer is the hottest season in India.

Question 3.
Which month is the coldest in India?

Answer:
January is the coldest month in India.

Question 4.
What is the benefit of monsoon season in India?

Answer:
In India, monsoon rain helps the farmers in the irrigation of crops.