Spring Season Essay Presentation in English for Students and Kids

Sometimes, they may miss out on certain vital aspects such as a presentation or content delivery. With the following guidelines, however, students will be able to write a better essay and secure more marks for the same. It will also help students improve their general writing skills which will certainly prove useful for future exams. Read on to find more about Essay on Spring Season in english for Class 3, Class 5, Class 10. 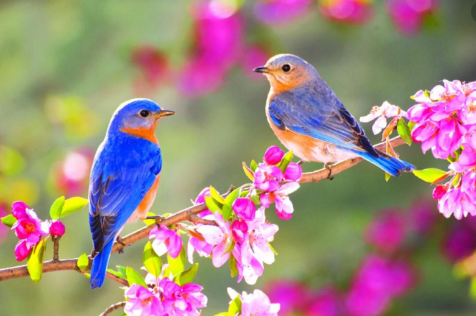 Paragraph on Spring Season Introduction in English: Spring is one of the four seasons where the days get longer and the weather gets warmer, especially in the temperate zone. This is due to the fact that the earth tilts relative to its orbital plane around the sun. It is also the season where animals breed and flowers bloom. Spring is also the period where many educational institutions and universities have a vacation around the world. The Season I Like Most Spring Essay.

From an ecological perspective, the spring season is not always determined by prefixed calendar dates. Instead, spring is marked by various biological indicators such as blooming flowers and breeding activities of animals. Even the soil has a characteristic smell, and it becomes warm enough for microorganisms in the soil to flourish. Ecologists have even divided the year into six seasons, with spring season being classified into “prevernal spring” (early spring) and “vernal spring”.

Spring Season Essay Introduction: Traditionally, spring is known as the season of rebirth, rejuvenation and new beginnings. This is due to the fact that the flowers bloom and animals breed during this season. The days also get longer and warmer compared to the other seasons. Farmers and agriculturalists sow their seeds as the temperatures become favorable for plant growth. However, the timing of spring varies depending on the location.

Besides the above-stated notions, most people associate spring with the astronomical definition of the word. It is defined as the period between the spring equinox and the summer solstice. It is also defined by the angle of the earth’s tilt towards the sun. Equinoxes are days of special significance as the days and nights are equal. Moreover, the earth experiences two equinoxes – one in spring and the other one in fall. The one that occurs in the spring is called the vernal equinox and it occurs by March 20th in the Northern Hemisphere. The Southern Hemisphere experiences the other equinox by September 22nd.

During summer solstice in the Northern Hemisphere, the North Pole is tilted at its greatest angle towards the sun – which occurs on June 21 every year. The same phenomenon happens in the Southern Hemisphere with the South Pole on December 21st.

Temperatures become warmer in the hemisphere that is tilted towards the sun. This means the ground, which previously would have been frozen over the winter months, would have started to thaw or become soft, allowing plants to grow. Spring is also characterized by the increase in rainfall, which helps plants to take root in the ground.

Animals that spent the winter hibernating emerge from their dens while those that migrated to warmer regions return. Animals that had a winter coat will shed them or change colour to blend in with the change in the landscape. Breeding activities also increase during this time, with many animals giving birth.

Sometimes, spring is also associated with floods, as the melting snow may overwhelm ponds and rivers. Tropical storms also occur during this season as the cold air from the far north or south combines with the warm air from the equator.

To sum up, the spring season is the season where the cold climate transitions to a warmer one. Flowers bloom and animals breed, it is also the season where days get longer and the weather gets warmer compared to other seasons. We soonly Update Essay on Spring Season in Hindi, Sanskrit, Marathi, Bengali, Gujarati, Punjabi.

Question 1.
When is spring season beginning in the northern hemisphere?

Answer:
Spring begins in the northern hemisphere on March 1st.

Question 2.
When is spring season beginning in the southern hemisphere?

Answer:
Spring begins in the southern hemisphere on September 1st.