What was Rutherford’s Original Hypothesis

Rutherford model of an atom
Rutherford and his co-workers made a fundamental contribution in understanding the structure of the atom and establishing the presence of a small nucleus in the atom. They performed a number of experiments known as scattering experiments. They took very thin sheets of gold foil (only 4 × 10–5 cm thick) and bombarded it with a stream of alpha (a) particles. The alpha particles are positively charged helium ions (He2+) which carry two units of positive charge and mass four times that of an atom of hydrogen (i.e., mass of helium ions = 4 a.m.u.). These are emitted from radioactive elements such as radium. 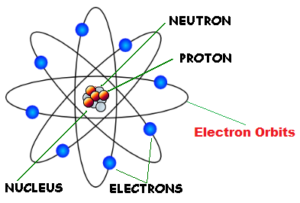 The main conclusions of Rutherford’s experiment :
Most of the space inside the atom is empty. Therefore, most of the a-particles went through the gold foil without deflecting from their path.
There is a positive tiny part in the atom in its centre, which deflects or repels the a-particles. This must be containing the whole mass of the atom. Moreover, this mass must be occupying a very small space within the atom because only a few a-particles suffered large deflections. This positively charged heavy mass in the centre of the atom is called nucleus. The a-particle get deflected from their normal path when they came close to nucleus due to force of repulsion (similar charges).
The deflections of the a-particles to large angles indicate that the a-particles has direct collision with the positively charged nucleus.
It was observed that the volume of the nucleus is very small as compared to the total volume of the atom. The radius of the atom is of the order of 10–10 m, while the radius of the nucleus has been estimated to be of the order of 10–15 m. This means that the size of the nucleus is extermely small i.e., about 105 times less than the size of the atom.

Drawbacks of Rutherford’s model :
Rutherford model failed in view of electromagnetic theory given by Maxwell. According to this theory a charged particle when accelerated emits energy in the form of electromagnetic radiation. According to Rutherford’s model, electrons are revolving around the nucleus. This means, electrons would be in a state of acceleration all the time. Since electrons are charged particles, therefore, electron revolving in an orbit should continuously emit radiations. As a result of this, it would slow down and would no longer be able to withstand the attractive force of the nucleus. Hence, it would move closer and closer to the nucleus and would finally fall in the nucleus by following a spiral path. This means atom would collapse. But actually we know atom is stable. Thus, Rutherford’s model failed to explain stability of atoms.