Raksha Bandhan Essay: Raksha Bandhan is a very auspicious occasion for Indian siblings. It is celebrated between the brothers and their sisters, as a tribute and dedication for the ever-lasting bond that they share.

This year, Raksha Bandhan is supposed to be on the 3rd August 2020. Sisters all around the country will express their love for their brothers, promising ever-lasting love and fraternity for them. Raksha Bandhan is a very common and widely celebrated occasion all over the country. It is celebrated in almost all Indian households. Thus, it is a very relevant topic to pen down an essay on.

To help students in completing their essay assignments on the topic of Raksha Bandhan, we have provided samples for long and short essays on the subject. Additionally, we have also jotted down ten lines on the topic which they can use as a guideline in framing their composition while writing it.

Before the essay begins, I would like to inform you that this long essay on Raksha Bandhan is helpful for students of classes 7, 8, 9, and 10.

The festival of Raksha Bandhan is a glorious and enthusiastic Indian celebratory festival which is celebrated mainly among the Hindu Indian families. It is observed between two siblings, who share the bond of being a brother and a sister – they don’t need to be related by blood; sisters tie Rakhi for their cousins as well. It is celebrated among every individual woman and an individual man who share a brotherhood of love between themselves.

Sisters and brothers wait for the arrival of Raksha Bandhan throughout the year. It does not occur on one particular day every year; instead, it follows the traditional Indian calendar. Roughly, it happens sometimes in the first week of August. This year, the festival of Rakhsha Bandhan has fallen on the third of August.

The festival is abundantly celebrated across the entire country and appeals to no particular age group. People from any age group, whether they be a kid or an adult, can celebrate the festival and tie rakhis on their brothers.

The Hindi phrase Raksha Bandhan means a bond fraught with love and protection. The Hindi word ‘Raksha’ means Protection in English; ‘Bandhan’ means tying of a relationship. Thus on the occasion of Rakhsha Bandhan, sisters tie rakhis on their brothers’ wrists, wishing for their excellent health and well-being; consequently, the brother pledges to love their sisters ever long and to protect her from all kinds of dangers. At the very core of it, it is a ritual that is based on the pillars of protection, love, and brotherhood.

The bond which brothers and sisters share between themselves is unique and bittersweet. They might be fighting at one moment, and the very next moment, they end up making up and solving their quarrel. Theirs is one of the purest and genuine friendship bonds to existing. Siblings play a very crucial role in our lives; they have seen us grow and mature over the years. They tend to know our most reliable and weakest points. They also sometimes tend to understand us better than we do ourselves. They have always been there to support us, to protect us, and to help us through troubled times. Rakhsha Bandhan is only a small way to commemorate that bond and promise for a future that is bright and shining.

Apart from the traditional methodology of the ritual, it is also an enjoyable ritual to celebrate. On the occasion of Raksha Bandhan, the entire family gathers together and celebrates the bond. Distant relatives and closer family come together; they dress up in new clothes and celebrate love. The sisters tie a thread (known as Rakhi) on their brothers’ wrist as a symbol of a strong bond. The sisters, in turn, are showered with love and respect. The brothers usually present them with small gifts, such as chocolates and other food items.

The preparations for the occasion begins a week prior, and sisters flock the market to purchase memorabilia for their brothers.

Thus it is a significant festival and is celebrated with much zeal. 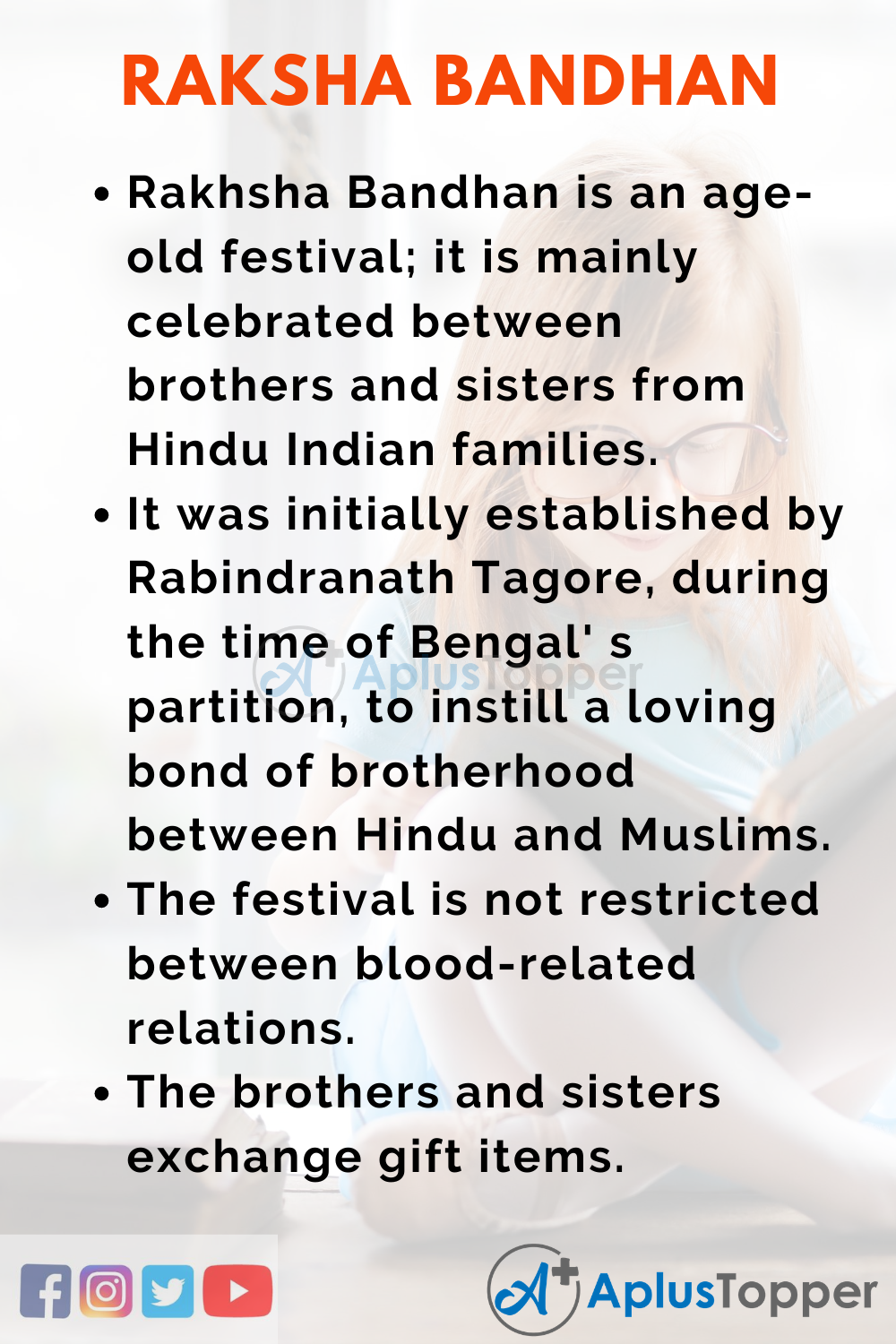 Short Essay on Raksha Bandhan in English 200 words for Kids

The festival of Rakhsha Bandhan is an Indian festival that is usually celebrated among Hindu families. It is a symbol of the strong bond that is shared by brothers and their sisters.

Apart from personal celebrations in houses, public celebrations also take place in the form of fairs and community functions. The sisters begin to prepare for the occasions a week before the actual festival. They gather in the bazaars and shop for fancy and beautiful rakhis. A lot of girls prefer to make rakhis of their own.

The brothers also prepare for the festival, and they purchase gifts for their sisters – sweets, chocolates, and other gift items. The ritual strengthens the love and friendship shared between the two people. Question 1.
What is the purpose behind celebrating Raksha Bandhan?

Answer:
The festival is celebrated to celebrate the love between a brother and a sister. It strengthens the bond that is shared between the two.

Question 2.
How is the festival celebrated?

Answer:
The festival follows Hindu traditions. The sister ties a thread, called the Rakhi, around her brother’s wrist. The thread stands for love, fraternity, and lifelong support.

Question 3.
When is the festival celebrated?

Answer:
The festival follows the traditional Hindu calendar; it is celebrated in the month of Sawan. It has fallen on the third of August this month.

Question 4.
Who celebrates the festival?

Answer:
Brothers and sisters celebrate the festival. It can, however, be observed between any man and woman who share a brotherly bond of love.