Raksha Bandhan is a glorious festival celebrated by the Hindu religion in India. This festival is known to increase harmony and peace among the different existing faiths in India. In modern times, all the brothers from every kind of relation strengthen their promise to prevent their sisters from evil influences. People from other communities also celebrate it and have named it as Avani Avattam and Kajari Purnima.

It is also named Rakhi Purnima, as observed on the full moon day of the month of Shravan according to the lunar calendar. On this auspicious day, sisters tie a sacred thread to the brother’s wrist, intending to strengthen their bond. 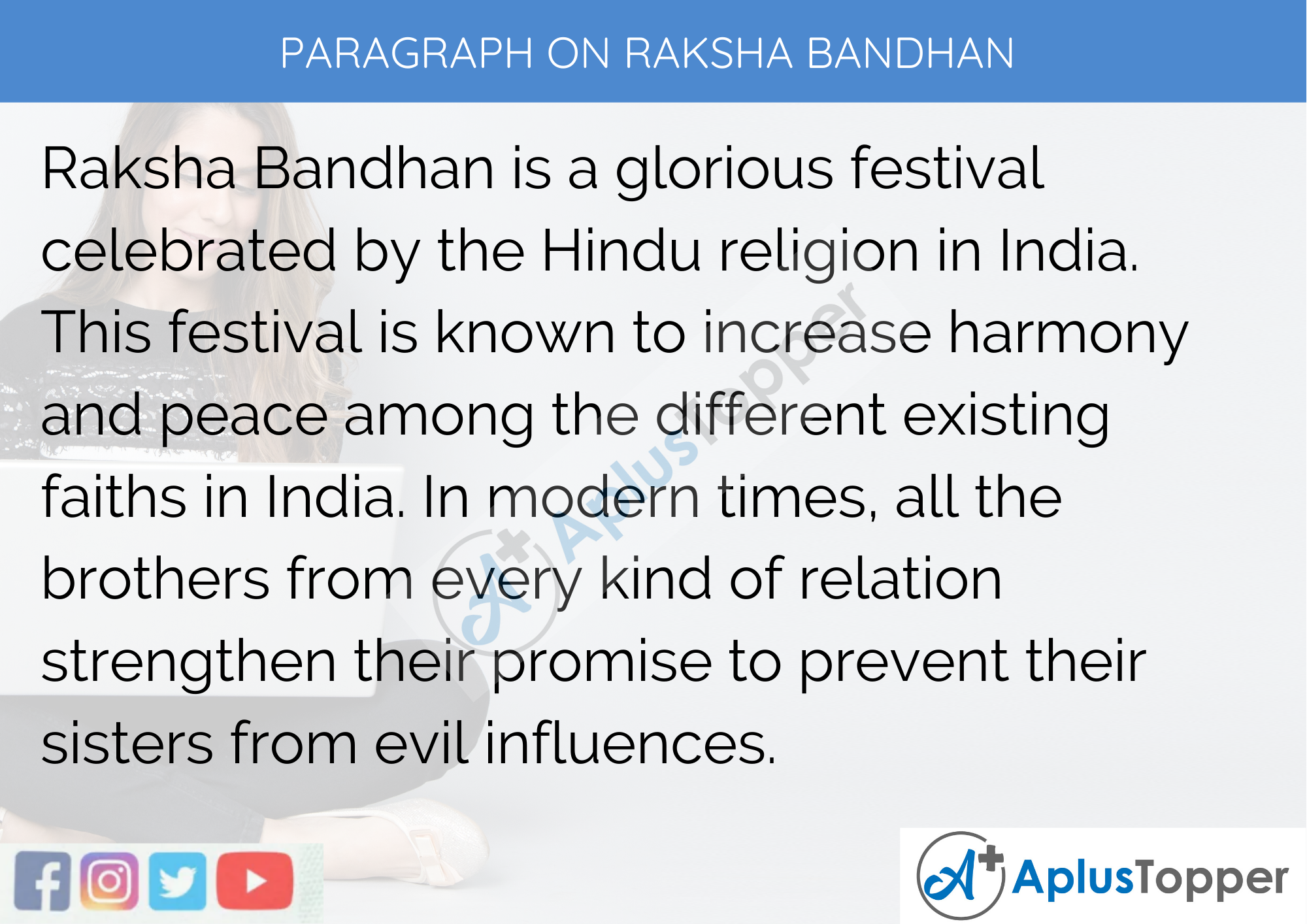 Raksha Bandhan is an Indian festival celebrated famously in the religion of Hinduism. This festival earmarks harmony and peace among the different religions in India. During British Raj, Rabindranath Tagore sought the medium of rakhi to cease the partition of Bengal. In Hindu mythology, this ritual was observed by various gods. Sachi, the wife of Lord Indra, tied a pious bracelet to protect her husband from the powerful evil king Bali. People from other communities also celebrate it and have named it Avani Avattam and Kajari Purnima.

Get Raksha Bandhan Essay for Students and Children from here.

Rakhi Purnima, known as Raksha Bandhan, is a famous festival observed by the Hindu community. On this auspicious day, the brothers traditionally consolidate their oath to protect their sisters from any obstacle. The sisters worship their brothers, tie a holy bracelet on their wrist, and receive gifts and money from their elders.

Rakhi is the symbol of love and unity, but if we study Hindu mythology, it is concluded that rakhi was not performed traditionally by siblings in ancient times. The wives conducted their rites on their husbands. In the legendary tale of Lord Indra Dev and his wife Sachi, Lord Indra went on a fierce battle with a powerful demonic king Bali. Fearing the threatened life of Lord Indra, his wife Sachi tied a pious bracelet to her husband’s wrist that was given to by Lord Vishnu. Thus, in ancient times the tying of thread has become a tradition for married couples, but in the present time, it has extended from brothers and sisters to every kind of relationship.

Raksha Bandhan is a famous festival celebrated in India by the Hindu community. According to the lunar calendar, this festival is observed on the day of the full moon in July or August. On this auspicious day, the brothers take an oath to protect their sisters from anything or anyone of harmful. Even the cousins and brothers believed by heart can pronounce their promise to look after their sisters. The sisters worship their brothers and then tie a band on their wrist to strengthen the oath, and in return, they receive a gift from their brothers.

Rakhi symbolizes the love and harmony, but if we study the Hindu mythology, we understand that rakhi was not only performed by brothers and sisters. In the legendary myth of Lord Indra Dev and Sachi, Lord Indra went on a fierce battle with a powerful demonic king Bali. This prolonged battle was not coming to a conclusion, and in fear of the threatened life of Lord Indra, his wife Sachi tied a pious bracelet to his wrist that was given to her by Lord Vishnu. Thus, in ancient times the tying of thread has become a tradition for married couples, but in the present time, it has extended from brothers and sisters to every kind of relationship.

During the British raj, this holy festival was celebrated to promote friendship and unity among different communities disturbed by foreign rule intervention.

The festival is not only observed by the Hindus but also by people belonging to other communities. As such, it has been named differently. For instance, in South India, Raksha Bandhan is called Avani Avatar. In some regions, it is called Kajari Purnima. 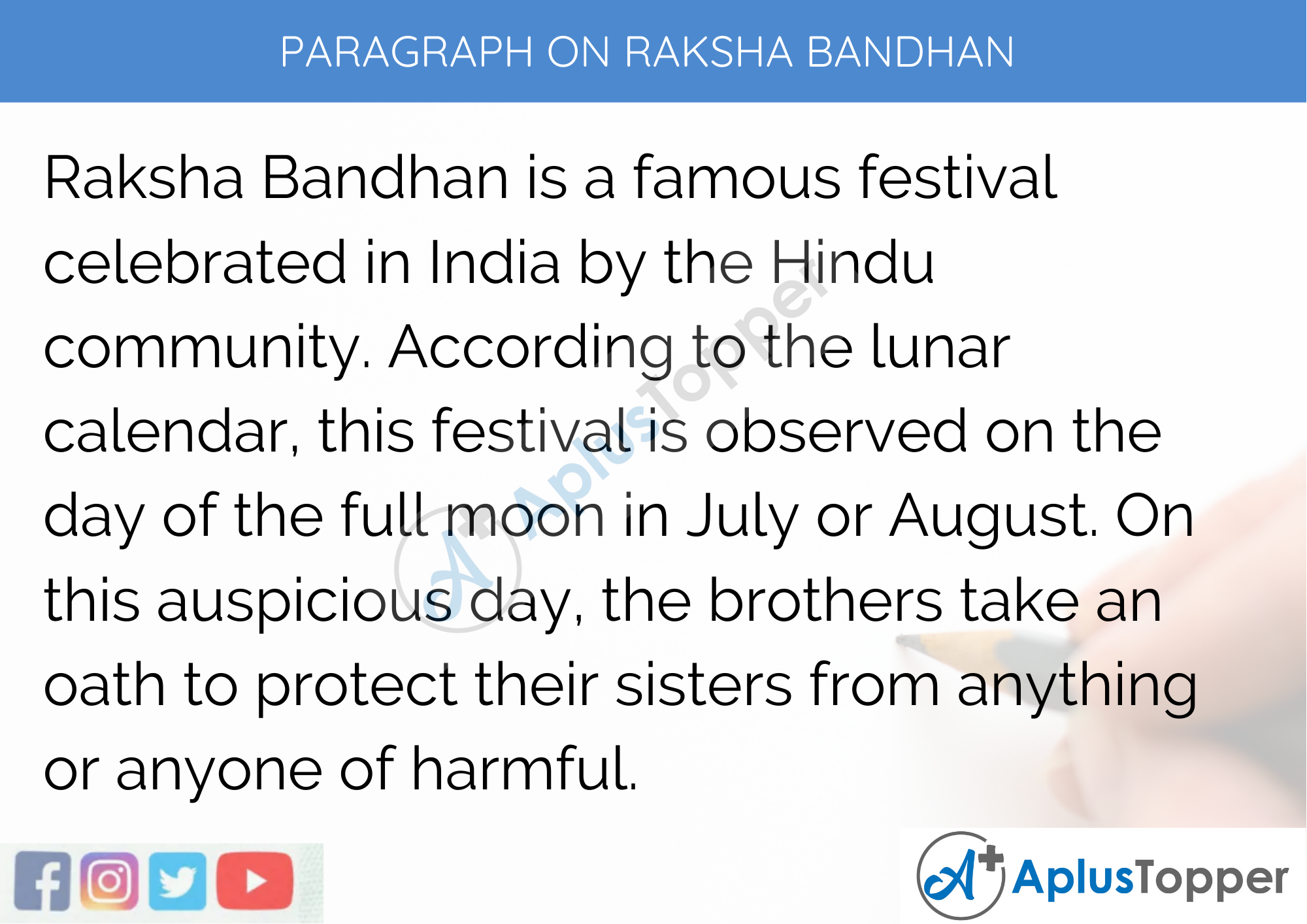 FAQ’s on Paragraph on Raksha Bandhan

Question 1.
When has this tradition of Raksha Bandhan started?

Answer:
It is known that the tradition of Raksha Bandhan dates back to 300 BC when Alexander invaded India.

Question 2.
How is Raksha Bandhan named in different states of India?

Answer:
In the state of West Bengal and Odisha and in the Western region, it is named Pavitrapana.

Question 3.
Are rakhi bands tied on the wrist of women?

Answer:
In certain parts of India, such as Rajasthan, there is a practice of Lumba rakhi in which bracelets are tied to sisters-in-law. This practice indicates feminism. It is also observed in the state of Gujarat too.

Question 4.
Is Raksha Bandhan celebrated in other countries besides India?

Answer:
Along with India, Raksha Bandhan is also celebrated in Nepal and Mauritius.