Paragraph on Ganesh Chaturthi in English: India is a land of age-old diverse and celebrated cultures. Every culture in India has its array of beautiful traditions, festivals and rituals. These customs have been in practice for centuries and also have a major mythological backing to them. Ganesh Chaturthi is one such beautiful festival celebrated in India. The below-given paragraph will provide you with more information about the same.

Ganesh Chaturthi is a Hindu festival that is celebrated on the birthday of Lord Ganesha who is the son of Lord Shiva and Goddess Parvati. During this festival, people pray to Lord Ganesha with great devotion and admiration. The festival lasts for eleven days during which various festivities take place. A special kind of sweet called modak is prepared in the joy of the special occasion. This festival is celebrated mostly in Maharashtra. At the end of the eleven days, the devotees carry their idols to the ocean where the iconic visarjan takes place to say goodbye to Lord Ganesha. 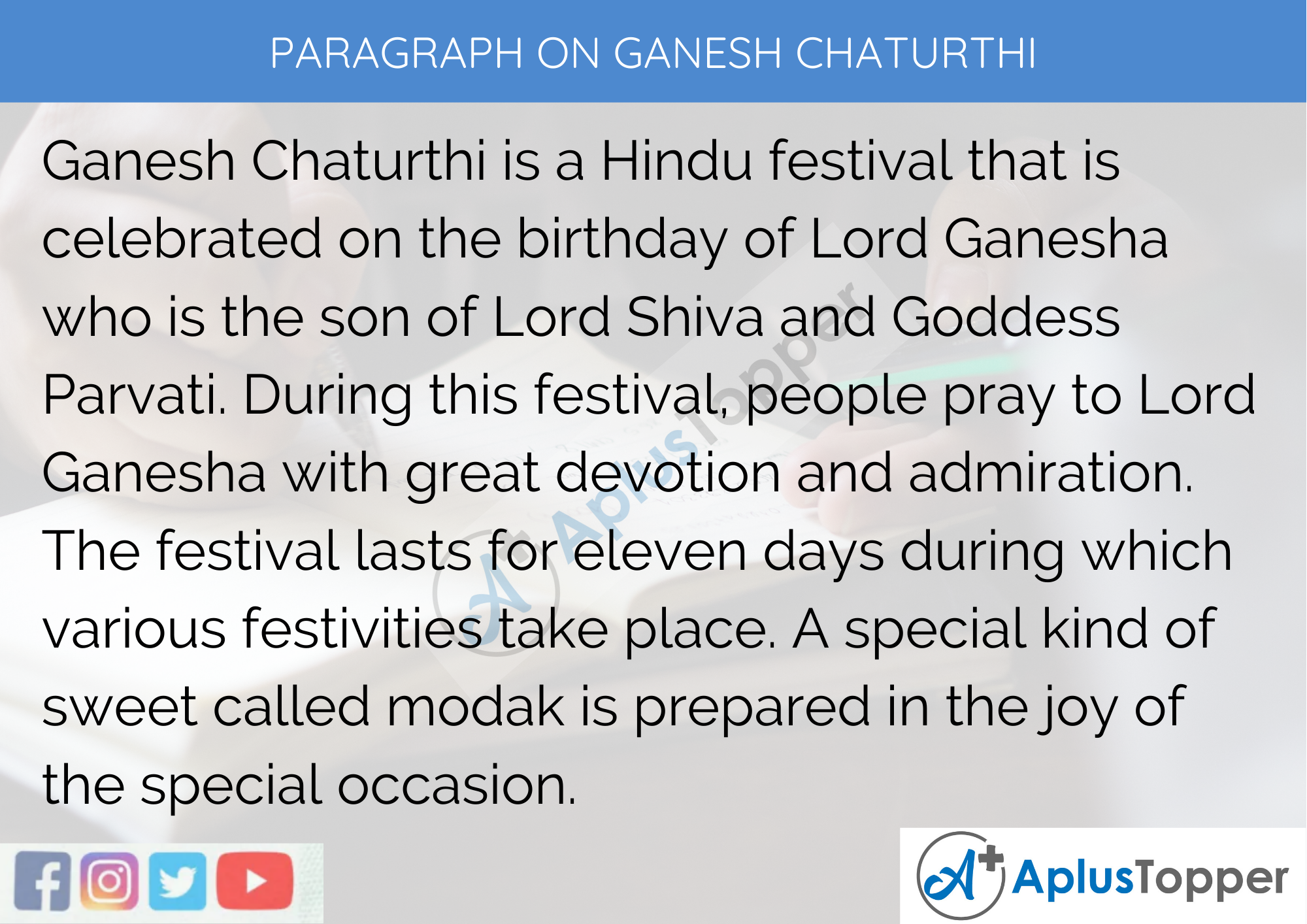 Ganesh Chaturthi is one of the eminent festivals of India. This festival is celebrated all over the country with immense joy, but it is majorly celebrated in the state of Maharashtra. The festival celebrates the birthday of the Hindu deity Lord Ganesha who is believed to be the remover of obstacles of life.

People welcome Lord Ganesha into their homes in the form of idols. His presence signifies the onset of happiness, good luck and prosperity. During the eleven days of Ganesh Chaturthi, a special sweet called modak is prepared as a treat for devotees and idols of Lord Ganesha. At the end of the eleven-day festival, people immerse their statues of Lord Ganesha into the nearest water source like the sea or river. This ritual is meant to reunite Lord Ganesha with his parents Lord Shiva and Goddess Parvati and wait for his arrival next year.

For eleven days, the devotees pray to their idol Lord Ganesha to bring peace, prosperity and happiness into their homes. Ganesh Aarti is performed in the morning and evening and the offerings of modak and ladoos are made to the deity. Lord Ganesha is believed to be the lord of resolving obstacles. His presence is known to remove all obstacles and difficulties from life. At the end of the eleven days comes the Anant Chaturdashi, where devotees immerse their statues of the deity into seas and rivers concluding the festivities with the visarjan ceremony. The visarjan ceremony is believed to take back Lord Ganesha to his parents Lord Shiva and Goddess Parvati.

Ganesh Chaturthi is an annual festival in India celebrated primarily in August and September. Also known as Vinayak Chaturthi, it is one of the most revered festivals in India. This festival marks the birthday of Hindu deity Lord Ganesha. More importantly, the festival signifies the arrival of Lord Ganesha with his mother goddess Parvati to the human realm from the Kailash mountain.

The celebrations begin on the day of Chaturthi when people install clay idols and statues of their devotee Lord Ganesha. Intricate and elaborate stages and ‘pandas’ are set up for the eleven-day festival. Ganesha aartis are conducted in the morning and evening at homes, temples and offices. Devotees chant Hindi hymns to please their deity. Temples distribute offerings of modaks among the people. Modaks are believed to be Lord Ganesha’s favourite sweet. During this festival, people decorate their homes, buy and wear new clothes and light diyas. Some people also fast during the eleven-day festival.

At the end of the eleven-day festival, the people immerse their clay idols of the deity in their nearest water source like a sea or a river. This submersion of Lord Ganesha is meant to reunite him with his parents Lord Shiva and Goddess Parvati. This ritual is known as the visarjan. This visarjan implies the removal of all obstacles and difficulties from a person’s life. Even though the festival is an age-old tradition, people have now started checking the impact this ritual has on the environment. The visarjan pollutes the oceans and rivers and submersion of non-eco-friendly idols has been checked rigorously. This festival is also widely celebrated in the states of Andhra Pradesh, Gujarat, Goa, Madhya Pradesh, Odisha and West Bengal. 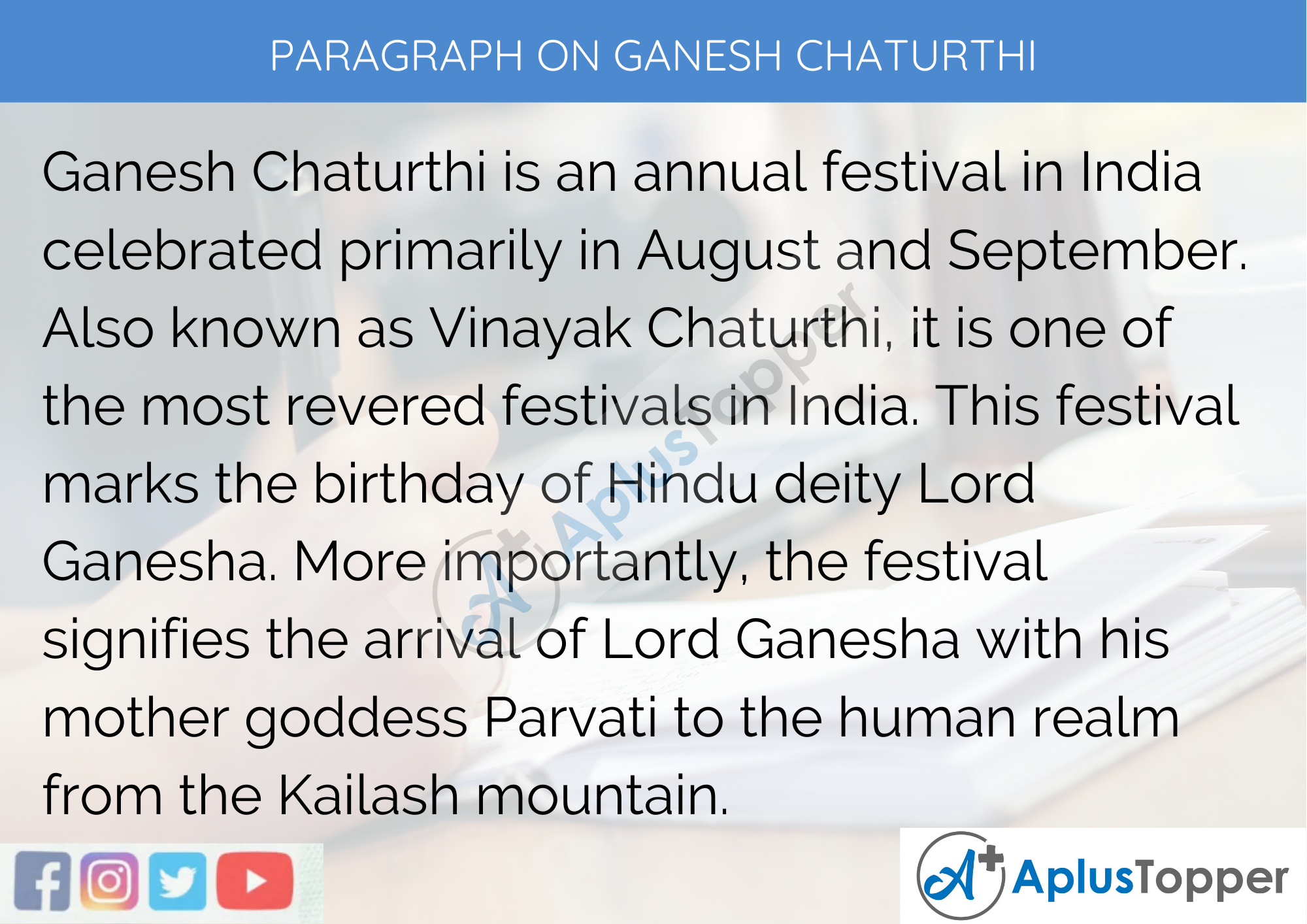 FAQ’s on Paragraph On Ganesh Chaturthi

Question 1.
What is the symbolization of celebrating Ganesh Chaturthi?

Question 2.
What is the significance of Ganesh Chaturthi with history?

Answer:
Ganesh Chathurthi was revived by freedom fighter Bal Gangadhar Tilak in the year 1893, to oppose the ban of public assemblies by the British.

Question 3.
Where is the festival celebrated?

Answer:
Ganesh Chaturthi is mostly celebrated in Maharashtra and parts of western India.