Ganesh Chaturthi is an annual festival and one of the most revered festivals in India. Also known as Vinayaka Chaturthi, the festival marks the birth of the Hindu God Ganesha. More specifically, the festival signifies the arrival of Lord Ganesha with his mother, Goddess Parvati to earth from Mount Kailash (Kailash Parvat).

Celebrations begin in the Bhadrapada month (also called Bhaado) of the Hindu Calendar. This month corresponds to August or September in the Gregorian calendar. It ends exactly 11 days after the start. The festival is celebrated with grandeur and devotion all over India. The public celebrates this festival by the installation of clay idols of Ganesha. Elaborate stages, called pandals, are also seen as a part of the celebration.

Moreover, devotees chant Vedic hymns and offer prayers to God. Temples and pandals often distribute offerings (called prasadams) to the general public. Popular sweets include the Modak, which was believed to the favorite sweet of Lord Ganesha.

When the festival ends, the idols of Lord Ganesha are carried in a public procession, often accompanied by music and dancing. It is then submerged in a nearby body of water or sea. It is believed that when the clay idol dissolves, Lord Ganesha returns to Mount Kailash. From a cultural perspective, Lord Ganesha signifies new beginnings and destroys any hindrances and obstructions.

The celebrations are especially grand in the states of Andhra Pradesh, Chhattisgarh, Goa, Gujarat, Karnataka, Kerala, Madhya Pradesh, Maharashtra, Odisha, Telangana and West Bengal. However, the festival has been observed outside India as well, in communities where Indians live. 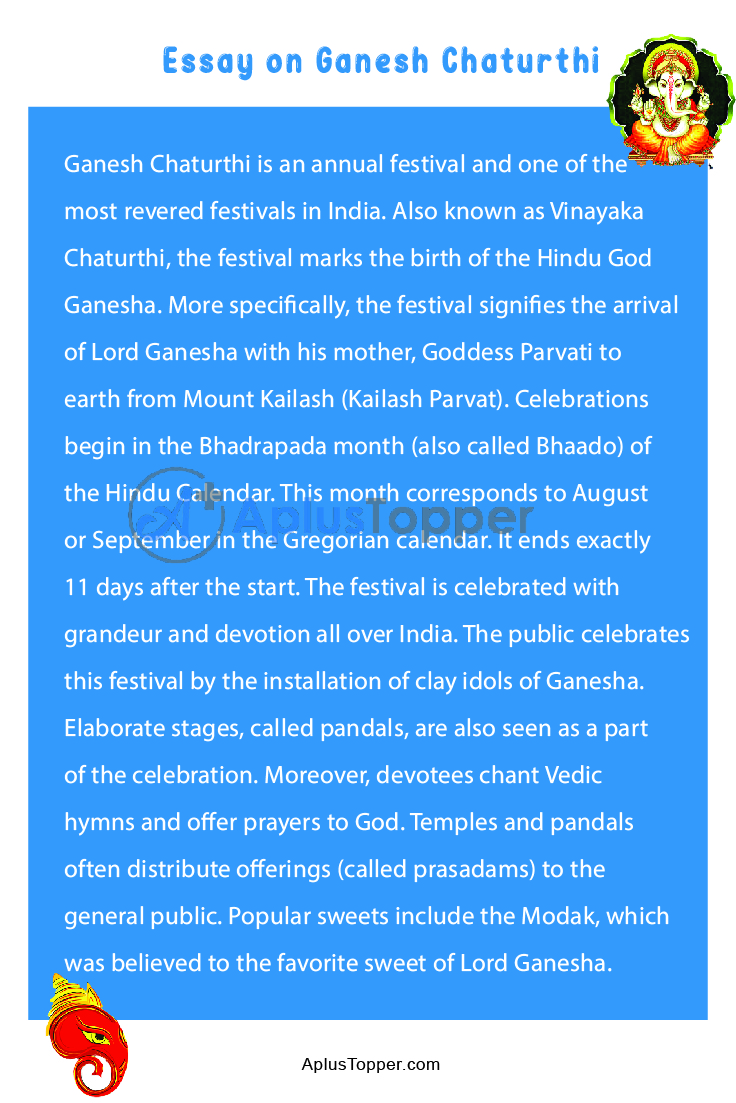 One of the most popular festivals in India, Ganesh Chaturthi is celebrated to mark the arrival of Lord Ganesh from the Kailash Mountains (Kailash Parvat) to Earth. The most iconic signature of the festival is the installation of clay idols of Lord Ganesha in homes or public institutions.

Even grander and more elaborate displays are observed in the form of temporary stages called “pandals”. Often, sweets such as modaks are offered as “prasadams” (a religious offering), which are believed to be the favorite of Lord Ganesha. The origins of the festival or when it was started are relatively unknown. However, it became popular during the reign of Chatrapati Shivaji during the 17th century.

Part of the celebrations also includes the chanting of hymns from the Vedas and other Hindu texts. Fasting (called the “Vrata”) is also observed during the celebrations. The festival starts in the Hindu month of Bhadrapada, which corresponds to August and September in the Gregorian Calendar. The celebration lasts for 11 days after its initial commencement.

For the year 2020, the festival is scheduled to begin on the 22nd of August. The end of the festival is marked with a procession, where the idol is carried to a nearby water body for submersion. The consequent submersion and dissolution of the clay idol signify the return of Lord Ganesha to Mount Kailash, where He is reunited with his parents, Goddess Parvati and Lord Shiva.  Ganesh Chaturthi celebrations are especially grand in Andhra Pradesh, Chhattisgarh, Goa, Gujarat, Karnataka, Kerala, Madhya Pradesh, Maharashtra, Odisha, Telangana and West Bengal.

Moreover, the festival is celebrated with the same elaborate grandeur in many places outside India too. For instance, in Pakistan, the festival celebrations are held by the Shri Maharashtra Panchayat, a support organization for Maharashtrians in Karachi. In the UK, the Hindu Culture and Heritage celebrates Ganesha Chaturthi in London at the Vishwa Temple. This is followed by the symbolic immersion of the idol in the River Thames. In America, The Philadelphia Ganesh Festival is celebrated with even more grandeur.

Question 1.
Why is Ganesh Chaturthi celebrated?

Answer:
This festival marks the arrival of Lord Ganesh to Earth from Mount Kailash

Question 2.
How is Ganesh Chaturthi celebrated?

Answer:
The festival is celebrated by the installation of clay idols of Ganesha. Moreover, elaborate stages, called pandals, are also seen as a part of the celebration

Question 3.
When is the festival celebrated?

Answer:
The festival starts in the Hindu month of Bhadrapada, which corresponds to August and September in the Gregorian Calendar.

Question 4.
How does the festival end?

Answer:
The festival ends with a procession, where the idol is carried to a nearby water body for submersion. The submersion and dissolution of the clay idol signifies the return of Lord Ganesha to Mount Kailash