The festival of colours always falls on Purnima – the day of a full moon. Holi is a two-day festival, and Holika Dahan is the day of March full moon – when a bonfire is lit for prayer. The bonfire is supposed to be cleansing, helping in burning away all bad and evil.

Slogans on Holi in English

Slogans are one-liners that are addressed towards a targeted audience to educate the audience about the topic. Holi celebrates the rebirth of new things and new beginnings by letting the bad and the harmful meltaway. The day after Holika Dahan is the actual festival of colours where people play with each other’s colours.

Here we are providing fifteen slogans to impact and raise awareness among the readers regarding Holi, its history, and significance. 15 Unique and Catchy Slogans on Holi

1. Holi is the festival of love, and on this day, one should forget all their misunderstandings between one another and come together and start a new beginning together.
2. May this Holi you spend your time with your family and experience the essence of the festival of colours.
3. The celebration of Holi dates back to the 4th Century. The festival of colours is celebrated worldwide, but predominantly the festivities take place in India and Nepal.
4. Enjoy yourselves to the fullest, and have the time of your lives. However, make sure you are not harming anyone in the process.
5. When you pick out colours for this year’s Holi, remember most of them have chemicals mixed in them. Choose wisely and go organic this year.
6. The festival Holi brings along with it a time of happiness, joy, and love. Enjoy yourself to the fullest on the occasion of celebrating love.
7. The term Holi comes from the word ‘Holika,’ which is the sister of demon king ‘Hiranyakashyap’ – who has been mentioned in Indian Mythology.
8. The festival of spring is celebrated in the month of Phalguna on the full moon, which usually falls during February or March.
9. In the Brag region of India, the festival Holi is celebrated for 16 days. Lord Krishna was born in Brag.
10. Countries like Fiji, Pakistan, the Philippines, Guyana, Trinidad, Tobago, and Mauritius also celebrate Holi.
11. Be very careful when you are buying colours as shopkeepers sell synthetic colours that are harmful to our skin and the environment. Go natural, play safe, Holi.
12. During the Holika bonfire, people perform the rituals around the bonfire, asking for God’s forgiveness and praying for all their evil to come to an end.
13. Holi will surely be happy when the colours you choose are eco-friendly and the feelings are healthy.
14. This Holi turns yourself ‘holy’ by praying to God to end all that’s evil and start a new beginning.
15. Take a dip in colours of love, joy, and happiness this Holi. 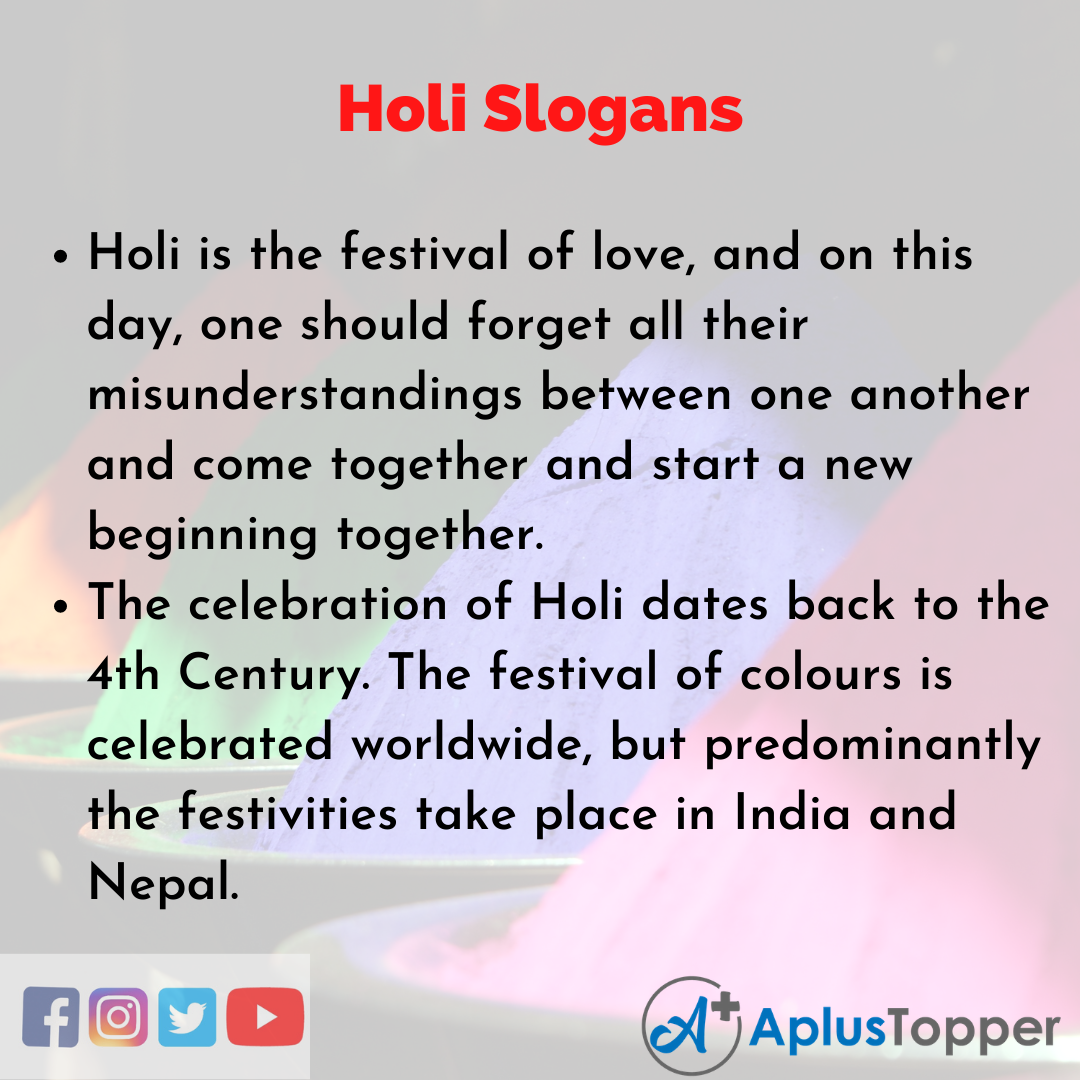 Question 1.
In what way is Holi celebrated In India?

Answer:
Holi is celebrated during March on the full moon evening of the month. During the evening of the festival’s eve, large pyres are put on fire in many parts of India, signifying evil spirits’ burning. People throw in twigs, dead leaves, and broken branches into the bonfire.

On the day of Holi, the streets turn colourful. People throw various shades of colours in powdered forms on each other and enjoy this playing of colours.

Question 2.
What rituals are performed during Holi?

Question 3.
Why is Holi called the festival of colours?

Answer:
It is believed to be based on the legend of Lord Krishna, who was self-conscious of the blue colour of his face due to being poisoned by breast milk.

Out of despair that Radha and other girls won’t like him, Krishna told his mother, who suggested him to paint his face so that his colour wouldn’t matter. Now thousands of people celebrate this festival by throwing paint around at each other and getting covered in colours.