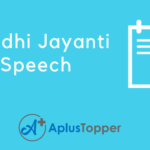 Gandhi Jayanti Speech: Mohandas Karam Chand Gandhi, also known as Father of Nation, was born on October 02nd, 1869 at a small town named Porbandar in Gujarat. Mahatma Gandhi's 150th Birth Anniversary will celebrate in India, not only in India his birth anniversary will celebrate and organize with different programs around the world. On this occasion, students will give … END_OF_DOCUMENT_TOKEN_TO_BE_REPLACED