Explain the Cleansing Action Of Soaps And Detergents

The cleansing action of soaps and detergents:

In aqueous solution, water molecules being polar in nature, surround the ions and not the hydrocarbon part of the molecule. When a soap or detergent is dissolved in water, the molecules associate together as clusters called micelles as shown in figure. 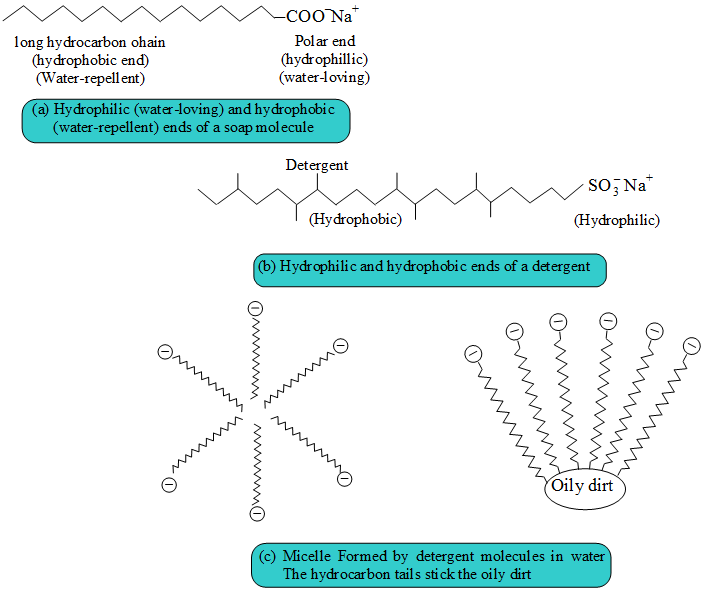 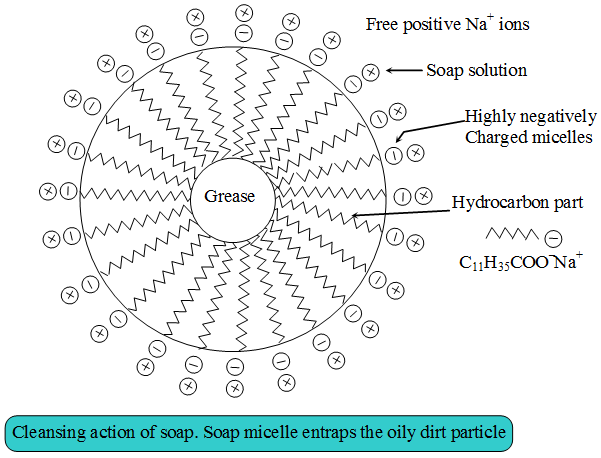 The tails stick inwards and the heads outwards.
In cleansing, the hydrocarbon tail attaches itself to oily dirt. When water is agitated (Shaken vigorously),the oily dirt tends to lift off from the dirty surface and dissociate into fragments.
This gives opportunity to other tails to stick to oil. The solution now contains small globules of oil surround by detergent molecules.
The negatively charged heads present in water prevent the small globules from coming together and form aggregates. Thus, the oily dirt is removed.
In the past, detergents caused pollution in rivers and waterbodies. The long carbon chain present in detergents used earlier, contained lot of branching. These branched chain detergent molecules were degraded very slowly by the micro-organims present in sewage discharge septic tanks and water bodies. Thus, the detergents persisted in water for long time and made water unfit for aquatic life. Nowadays, the detergents are made up of molecules in which branching is kept at minimum. These are degraded more easily than branched chain detergents.

Effectiveness of the cleansing action of soap and detergent experiment

Conclusion:
The cleansing action of a detergent is more effective than a soap in hard water. The hypothesis is accepted.