What is the formula for work?

Definition: In our daily life “work” implies an activity resulting in muscular or mental exertion. However, in physics the term ‘work’ is used in a specific sense involves the displacement of a particle or body under the action of a force. “work is said to be done when the point of application of a force moves.
Work done in moving a body is equal to the product of force exerted on the body and the distance moved by the body in the direction of force.
Work = Force × Distance moved in the direction of force.

The work done by a force on a body depends on two factors
(i) Magnitude of the force, and
(ii) Distance through which the body moves (in the direction of force) 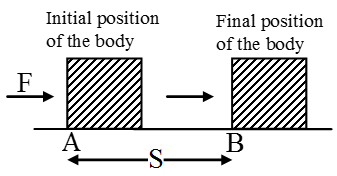 Work done when force and displacement are along same line:
Work done by a force: Work is said to be done by a force if the direction of displacement is the same as the direction of the applied force.
Work done against the force: Work is said to be done against a force if the direction of the displacement is opposite to that of the force.
Work done against gravity: To lift an object, an applied force has to be equal and opposite to the force of gravity acting on the object. If ‘m’ is the mass of the object and ‘h’ is the height through which it is raised, then the upward force
(F) = force of gravity = mg
If ‘W’ stands for work done, then
W = F . h = mg . h
Thus W = mgh
Therefore we can say that, “The amount of work done is equal to the product of weight of the body and the vertical distance through which the body is lifted.

Work done when force and displacement are inclined (Oblique case):
Consider a force ‘F’ acting at angle θ to the direction of displacement ‘s’ as shown in fig.

Work Done By A Force Example Problems With Solutions

Example 12. A worker uses a horizontal force of 400 N to push a rubbish cart.

Example 13. A boy uses a force of 120 N to pull a crate along a straight corridor. The applied force is at an angle of 30° with the horizontal floor.