Women’s Day Slogans: Every year on the 8th day of March, the entire world comes together to celebrate International Women’s Day. The event is a promising one, where the people show their admiration and respect for the women around them. This day is a center of activity for Women’s rights movement.

The first-ever women’s day was celebrated in the year 1909. The United States of America conducted it. Although the first-ever movement took place in 1909, internationally this day received recognition from the year 1911. The Socialist Party of America gave the proposal for celebrating a day, annually, which is devoted to women in New York City. The International Women’s Day raises slogans for the favour of gender equality and against bias against women.

From being a mother to a wife, from a working woman to a house maker, a woman plays several unique roles. This day celebrates the achievements of women and raises concern to form a world which gives equal respect to women in all fields. This movement establishes that inequality is the primary key that restricts the growth of women.

Slogans on Women’s Day in English

As equal to men, there are numerous examples where women have participated in making the world a better place to live in. Numerous events are scattered over the globe where you can find the most significant achievements of women. There is Amelia Earhart who is known to have flown across the Atlantic solo. Everyone knows about Mary Kom, who is a five-time world boxing champion. Mother Teresa has been regarded as a symbol of peace for the entire world, while the first woman president in India was the famous Indira Gandhi.

There is a variation in celebration for this day. While in some countries it is celebrated as a public holiday, in some other countries it is entirely ignored. In countries like Afghanistan, Cuba, Moldova, Mongolia there is a country holiday. Countries like Chile, Cameroon do not provide a public holiday, but the celebration is far and wide. In Cameroon every year, innumerable women come to the streets to take part in this celebration.

This day is celebrated as the men giving gifts and tokens to the women in their lives, be it their mother, wife, daughter, or even colleagues. The theme for every year keeps on changing. The theme for the current year was “I am Generation Equality: Realizing Women’s Rights”. Some many nations and organisations come forward in this day to raise funds and do charitable works as well. Of recent, this movement has partnered with several well-known companies like Avon, Amazon, HCL, Medtronic, while the charitable partners include Catalyst, World Association of Girl Guides and Girl Scouts. 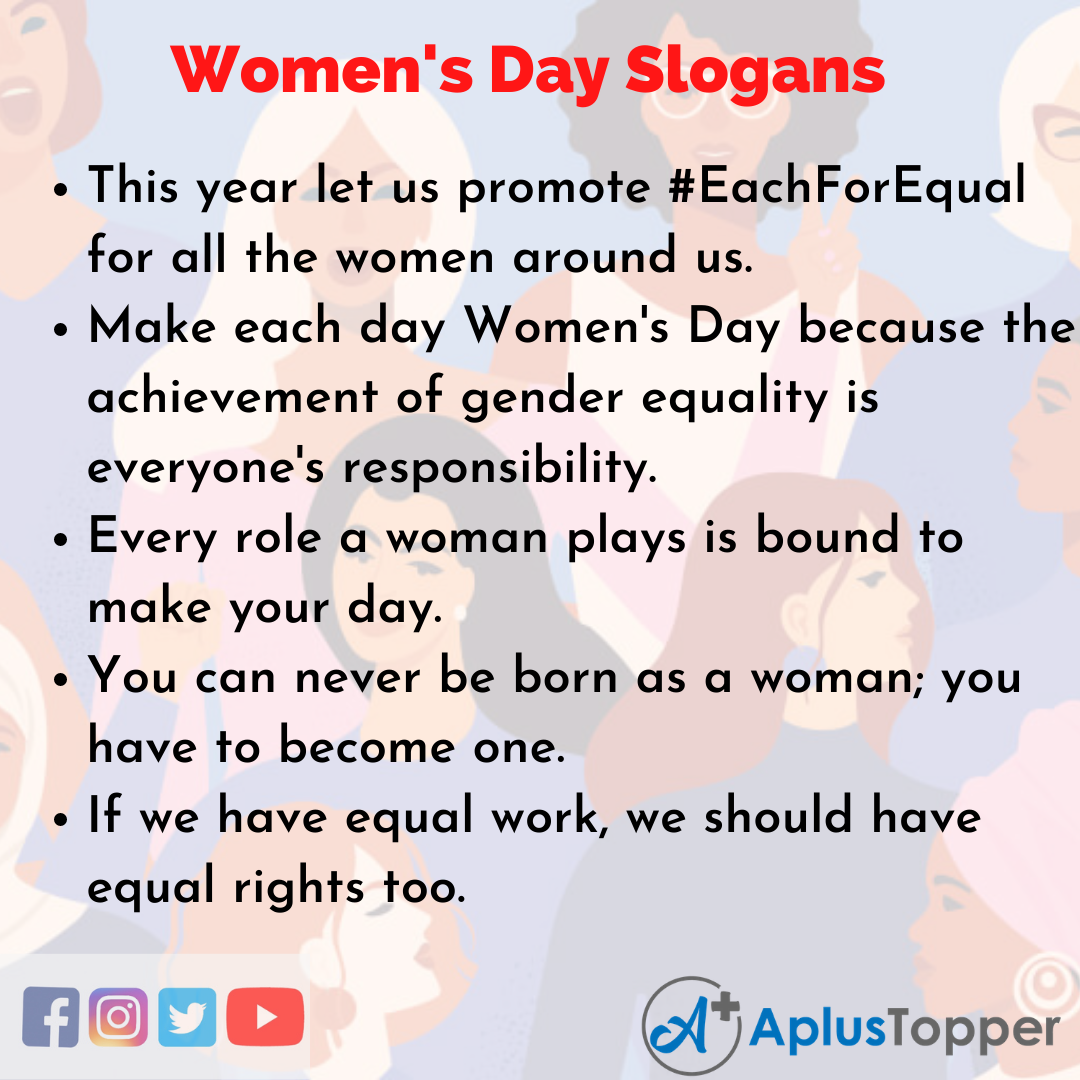 Celebrate each day as Women’s Day with these catchphrases and spread the achievements of the women around you. Cease yourself from pulling the women back but push them ahead and help them spread their wings to the fullest.

1. This year let us promote #EachForEqual for all the women around us.
2. Make each day Women’s Day because the achievement of gender equality is everyone’s responsibility.
3. Every role a woman plays is bound to make your day.
4. You can never be born as a woman; you have to become one.
5. If we have equal work, we should have equal rights too.
6. Wish for empowering humanity should be fulfilled by empowering the women around you.
7. The achievements of women are genuinely celebrated when there are equal rights.
8. A woman gives you her entire world; It is time to make the world a better place for her.
9. A woman is an embodiment of strength who never gives up.
10. A woman’s equality never threatens man’s quality.
11. Pull off a sustainable society with gender equality.
12. Not only heroes but let us celebrate she-roes too.
13. If you quantify the achievements of women, then there is no better indicator of social achievement.
14. Celebrate womanhood in every form, sister, mother, or wife; Notice a bias against her? Raise your voice.
15. A woman is a powerhouse of strength and reservoir of love; this year, let us vow to make them feel special.