Water pollution is the spoilation of water bodies that are usually caused due to human activities. When toxin substances are introduced into water bodies such as lakes, oceans, rivers and so on, water pollution takes place. The toxins either get dissolved in the water or deposited on the bed or are lying suspended in the water, degrading the quality of water. With widespread water pollution, people’s health is being jeopardized. Every year, polluted water kills more people than war and other forms of violence combined.

Less than one percent of the earth’s population has access to freshwater; making our drinkable sources finite. Polluted water affects the aquatic ecosystem.

The pollutants seep through and reach the groundwater which we use in our households as contaminated water in our daily activities, including drinking water. The primary cause of illness from contaminated water is waterborne pathogens, present in the form of disease-causing bacteria and viruses from both human and animal waste.

Water is known as the ‘universal solvent’ and can dissolve more substances compared to any other liquid. This serves as the reason why water gets easily polluted. From chunks of garbage to invisible chemicals serve as the source for water pollution.

There are a number of principle causes of water pollution one of the leading causes being city sewage and industrial waste discharge into water bodies. Water is also indirectly contaminated by pollutants that enter the water supply from groundwater or soils and also from the atmosphere through the rain. Groundwater and soils contain the residue of human agricultural practices and improper disposal of industrial waste.

Point sources of dispersed sources are the source of water pollutants. Every healthy ecosystem has a complex web of animals, plants, bacteria and fungi. Harming any of these organisms has a chain effect, disrupting the entire ecosystem. Water pollution is of various types – organic, inorganic, and radioactive and so on. Point sources of water pollution can be comparatively easily controlled as the contaminated water has been conveyed and collected into a single point where it is treated. 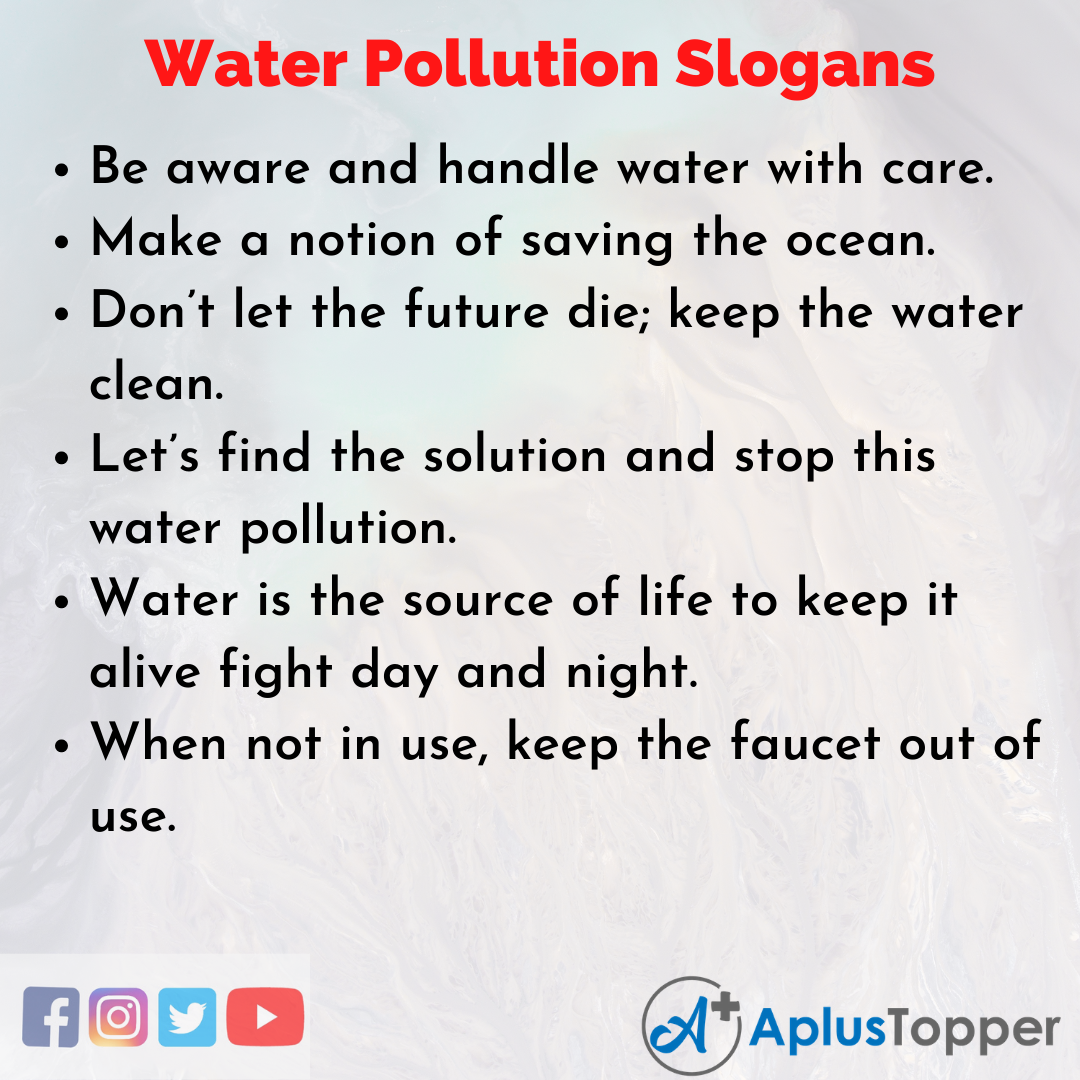 Slogans are one-liners with a memorable motto or phrase intending to have a positive impact on the audience. Slogans are catchy and unique spreading awareness and persuading members of a particular targeted audience. Here we are providing unique and attention-grabbing slogans on ‘Water Pollution’ to raise awareness about the risks that the world is facing today.

Contaminated water has the ability to not only make a person ill but also take people’s lives. Around 1 billion people get sick due to unsafe water every year. Low-income communities have a higher risk as their homes are often close to most polluting industries. Water pollution is a global problem; however, the contribution to it can be limited.

The slogan is a catch phase intending to have a positive impact on its targeted audience. These slogans not only intend to raise awareness but also inspire audiences to do their part in order to control and limit pollution. These slogans will motivate and inspire you to contribute to a clean and happy society.

Following are 15 Water Pollution Slogans for the measures to be followed by individuals from every section of the society and all age groups. These one-liners would help understand the intensity of the problem.