Vote Slogans: Voting in India is a legal right if one is a citizen above 18 years of age. It has been an inclination among voters, especially in the city areas, to treat the voting day as a day of the holiday. While skipping the vote may not appear to cause any harm, the long-term results are disastrous.

The significance of voting is lost amongst the hustle and bustle of urban life. While everyone sits and complains about this and that, makes suggestions that the government should change, the elections come and go without half the population paying attention.

Slogans on Vote in English

While some genuinely cast their vote, many people sit back and relax on voting day, and others are cajoled into voting for particular candidates. The general attitude is such that as if their one vote does not make a difference. 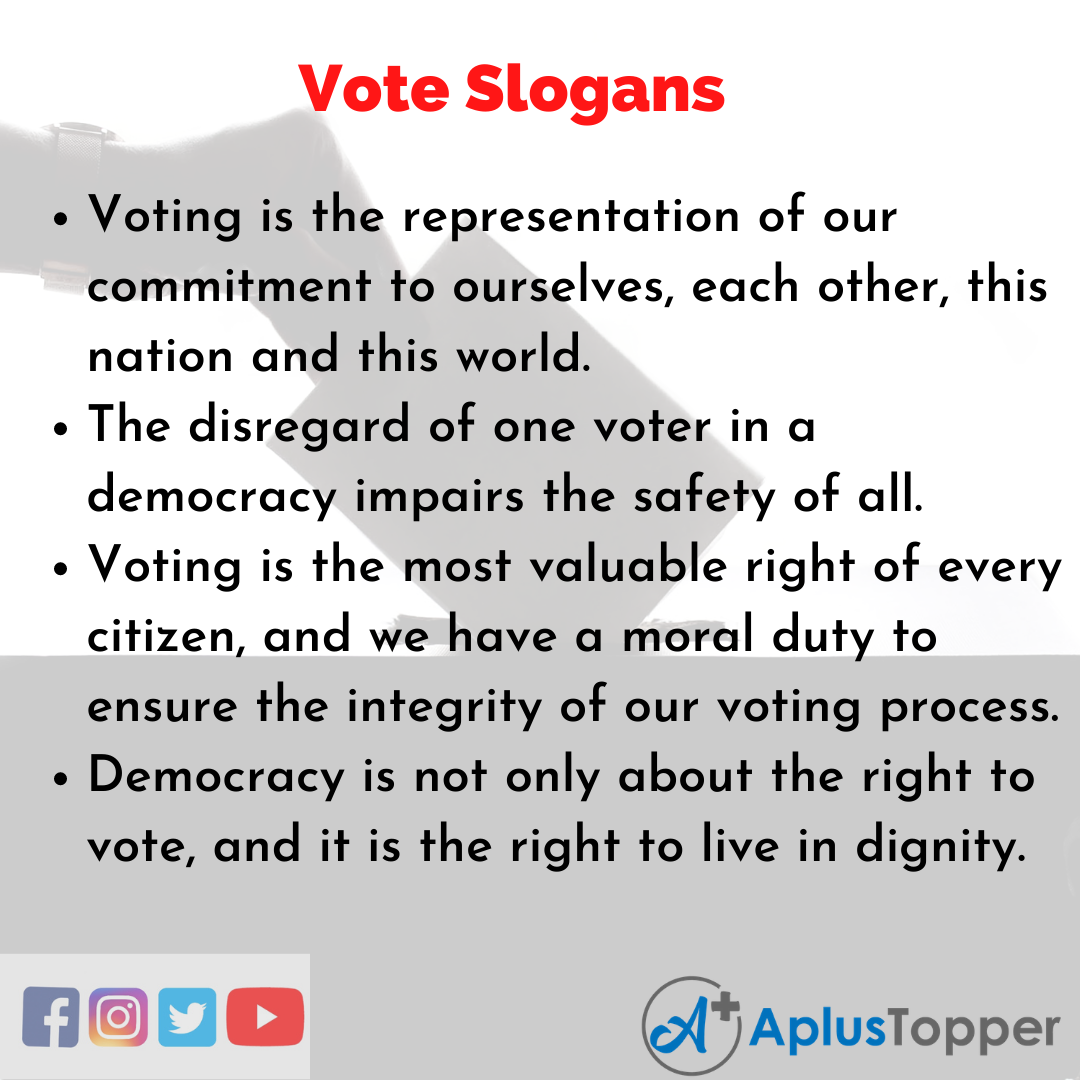 1. Voting is the representation of our commitment to ourselves, each other, this nation and this world.
2. The disregard of one voter in a democracy impairs the safety of all.
3. Voting is the most valuable right of every citizen, and we have a moral duty to ensure the integrity of our voting process.
4. Democracy is not only about the right to vote, and it is the right to live in dignity.
5. By voting, we lend our voice to the chorus that shapes opinions and the basis for actions.
6. Talk is cheap, and voting is free; take it to the polls
7. Democracy is about voting, and it’s about a majority vote. And it’s time that we began exercising the Democratic process
8. Voting is as much an sentimental act as it is an intellectual one
9. We should all agree on the value of voting
10. There’s no such thing as one vote that doesn’t have value
11. I enjoy voting day. I love the scene of my fellow citizens lining up to make their voices heard
12. Bad leaders are elected by tolerant citizens who don’t vote
13. If you don’t cast your vote, you lose the right to protest
14. A man without casting his vote is a man without security
15. Each election is defined by the people who show up. 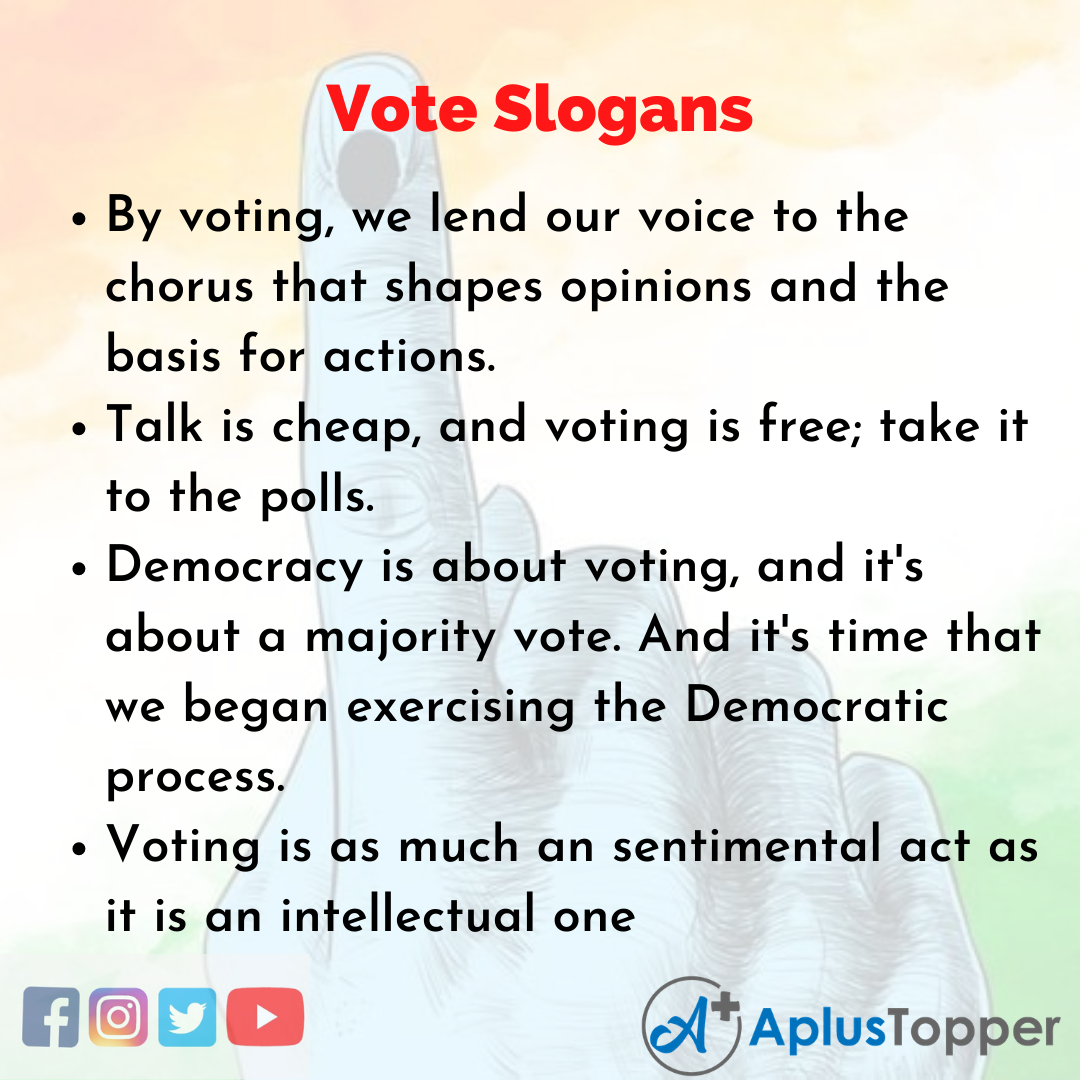 Question 1.
What are the reasons behind voting?

Answer:
India is mounted on the foundations of the election. Voting is a legal right that we are fortunate to have. We take it for granted, but the law has given us the power to elect who we want, and the right to make the difference. Your vote can play a significant part in making the difference.

If you are unsatisfied with the present government, you can vote for a better one. Though it appears like an unending sea of people are there to vote, every vote counts. The national perspective changes from thinking “my vote doesn’t make a difference”. The responsibility lies on every individual.

Question 2.
What is meant by the term NOTA?

Answer:
The Government of India has made the requirement for voters to utilise their vote even if they are not satisfied with any of the nominees. NOTA is for None of the Above, and this is a crucial vote to cast for the ones who aren’t convinced by any of the parties competing. Voting NOTA signifies that none of the candidates is worthy enough.

NOTA votes count, however in case the majority of the votes are NOTA, then the party with the next majority will come to rule. However, not many people opt for the option of NOTA even if they are unhappy with the given choices of candidates.

Question 3.
How does our vote matter in Lok Sabha and Rajya Sabha?

Rajya Sabha – The Council of States is additionally recognized as the upper house of the Indian Parliament. The members are selected by the elected representatives of the State Legislative Assemblies, and the Electoral college of the current Union Territories. Consequently, the members of the Rajya Sabha are indirectly elected by the citizens.