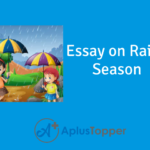 Essay on Rainy Season: Rainy Season, or the wet season, is one among the four seasons when the region’s average rainfall is achieved. It is generally caused due to changes in the flow of winds and other geological factors. Generally, the rainy season brings much-needed relief from the extreme heat of the preceding summer season, replenishing the rivers and lakes. Plants that … END_OF_DOCUMENT_TOKEN_TO_BE_REPLACED