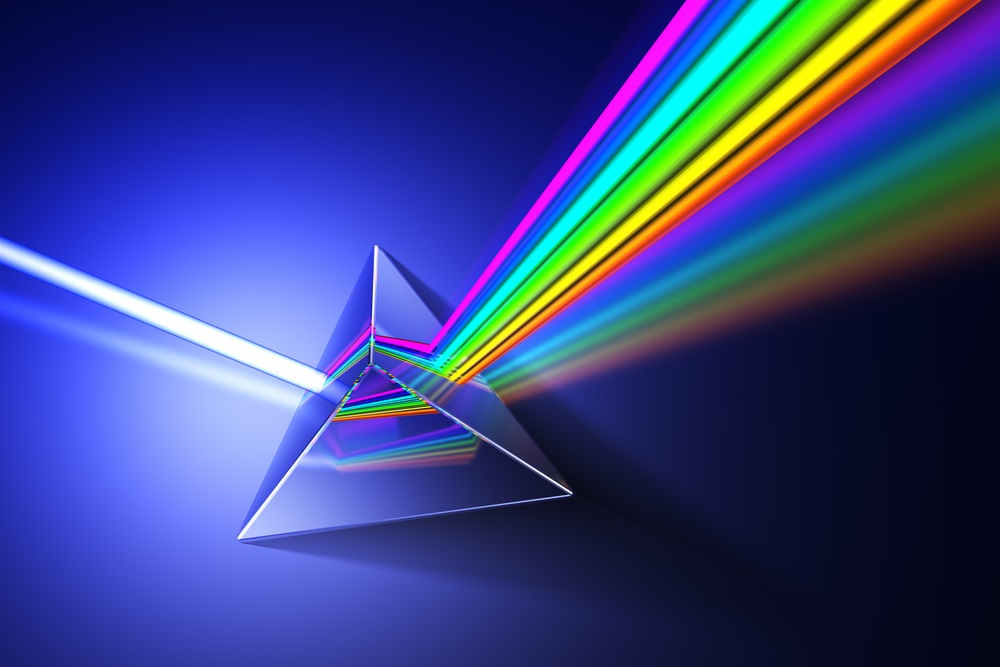 Question 6: What is the region beyond the red end of spectrum called?
Answer: Infra red region.

Question 7: In the atmosphere which colour of light gets scattered the least?
Answer: In atmosphere red colour scatters the least.

Question 8: Which characteristic property of light is responsible for the blue colour of the sky?
Answer: Dispersion of light.

Question 10: Name any two electromagnetic waves which have a frequency higher than that of violet light. State one use of each.
Answer: The two electromagnetic waves and their uses having frequency higher than that of violet light is:
X-rays: X-rays are very extensively used for medical purposes, e.g., in surgery to detect bone fractures by studying X-rays photographs.
Gamma rays: Gamma radiations are used in the cure of cancer.

Question 16: How can the presence of infrared Radiations be detected?
Answer: In presence of infra red radiations, the temperature recorded by a blackened bulb thermometer rapidly increases.

Question 27: Give one use electromagnetic radiations in Microwaves.
Answer: Microwaves are used for communication.

Question 32: Suggest one way, in each case, by which we can detect the presence of Infrared radiations.
Answer: These are detected by a thermopile.

Question 33: Suggest one way, in each case, by which we can detect the presence of Ultraviolet radiations.
Answer: When a silver chloride solution is taken in a test tube and is passed from red to violet light no change is seen. But beyond the violet end the solution first turns violet and then it turns dark brown.

Question 35: Name the radiations used for detection of fracture in bones.
Answer: X-rays.

Question 36: What is the region beyond the violet end of spectrum called?
Answer: Ultra-violet region.

Question 40: Explain, why quartz prism is required for obtaining the spectrum of ultra-violet light?
Answer: The reason is that glass absorbs the ultra-violet radiations while the quartz does not absorb them.

Question 41: Rock salt prism is used instead of glass prism to obtain the infra red spectrum. Give reason.
Answer: The reason is that glass absorbs the infra red radiations while the rocksalts does not absorb them.

Question 42: Name the radiations that are used for photography at night.
Answer: Infrared radiations.

Question 1: A prism causes dispersion of white light while a rectangular glass block does not. Explain.
Answer: In a prism, the refraction of light takes place at the two slant surfaces. The dispersion of white light occurs at the first surface of prism where its constituent colours are deviated through different angles. At the second surface, these splitted colours suffer only refraction and they get further separated. But in a rectangular glass block, the refraction of light takes place at the two parallel surfaces. At the first surface, although the white light splits into its constituent colours on refraction, but these splitted colurs on suffering refraction at the second surface emerge out in form of a parallel beam, which give an impression of white light.

Question 2: In the figure (i) and (ii) a beam of light consisting of three colours blue, red and yellow is incident on a prism and on a rectangular glass block respectively. Complete the diagrams by drawings the refracted and emergent rays. 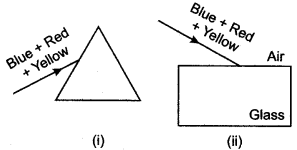 Answer: The completed diagram is shown below: 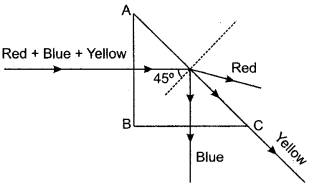 Question 4: Draw a neat diagram to show the arrangement you would use to project a pure spectrum of white light on a screen.
Answer: The diagram is shown below:

Question 1: Comment on the statement: ‘When any ray of white light is incident on a glass prism, it simply disperses it into its seven constituent colours.
Answer: Before making any comment, the following simple experiment should be performed.

Arrangement is shown in the diagram. P1 and P2 are two glass prisms exactly similar and placed at some distance from each of the such that their refracting surfaces are parallel to each other and the base of the prism P2 is upwards and vertex downwards. S is a narrow slit through which a ray of white light is incident on the refracting face of the prism P1. It is dispersed by it into its seven constituent colours.
When this dispersed light falls on the refracting surface of the prism P2, having its base upwards so that the rays are deviated in a direction different from the first, we see on the screen only a white spot of light. It is evident that the second prism P2 recombines these colours to form white light acting as a ‘recombination prism’ while the first prism acts as a ‘dispersing prism’.

Question 2: An imaginary material reflects red light, scatters green light, transmits blue light and absorbs yellow, orange and violet light. A cube of this material is shown in the given diagram. 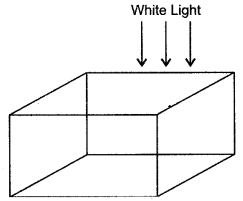 Question 1: What is the wavelength of the wave whose frequency is 1012 Hz? Name the electromagnetic wave.
Solution:

These waves are heat waves or infra-red waves whose wavelength varies from 10-2 to 10-4 cm.