A vote is the freedom of choice or opinion that is given to every human to exercise in an election or meeting. Voting is the method of making the collective decision or expressing an opinion usually on election campaigns, discussions or debates. Voting takes place in a group such as a meeting or an electorate.

Democratic countries organize elections for the selection of officeholders and their government; choosing among several candidates. Every vote counts and its necessary for every eligible adult citizen of the country to cast their vote as the majority vote is the formal expression of an individual’s choice.

Slogans on Voting Awareness in English

Slogans are one-liners intending to impact the targeted audience positively. Voting affects every amenity and facility one experiences in their life, and hence if you want to make a change, voting allows you to do that. Here we are providing fifteen slogans to educate every section of the society about voting awareness.

These slogans are adequate in spreading awareness among the masses about voting and its importance. 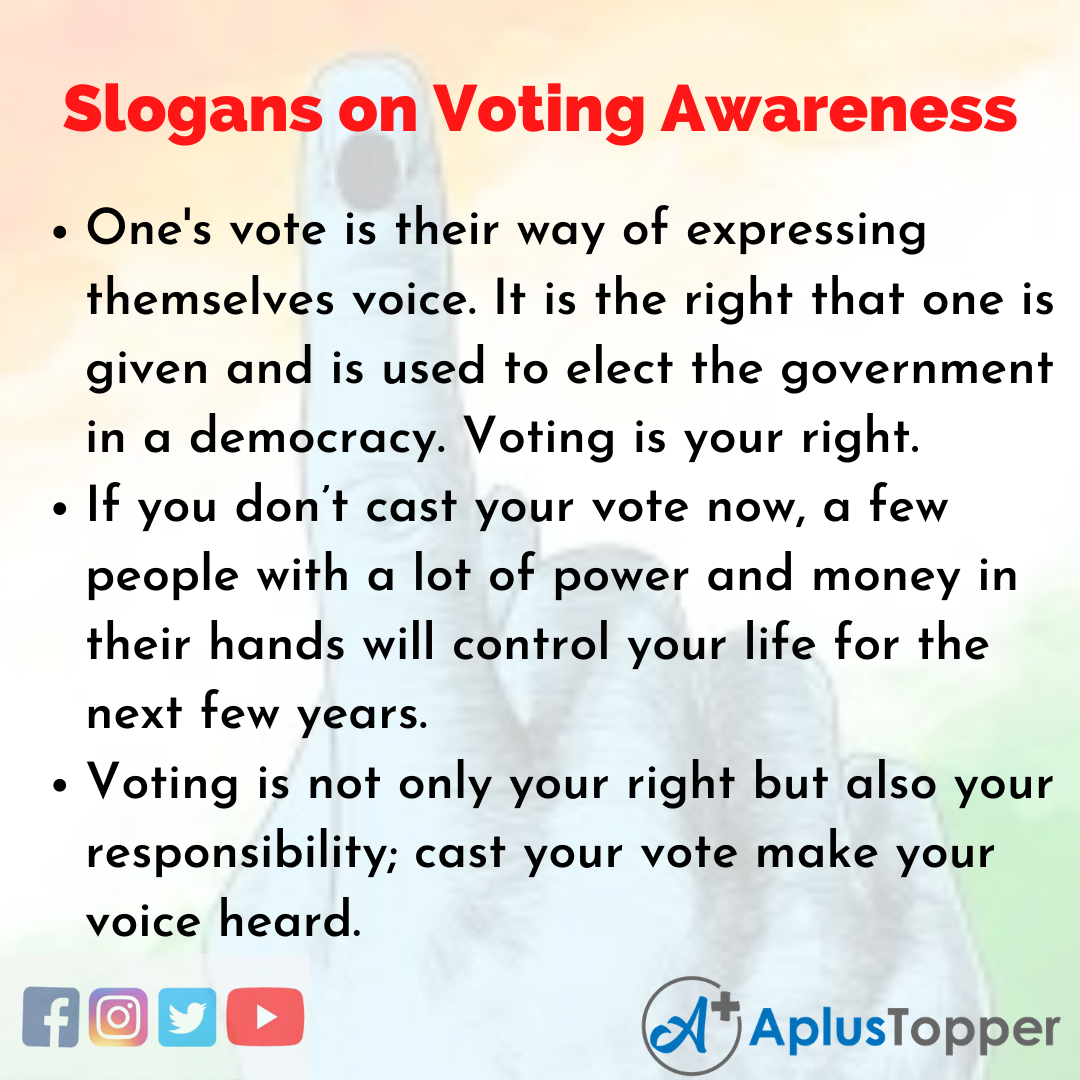 1. One’s vote is their way of expressing themselves voice. It is the right that one is given and is used to elect the government in a democracy. Voting is your right.
2. If you don’t cast your vote now, a few people with a lot of power and money in their hands will control your life for the next few years.
3. If you don’t like something, why are you choosing to stay quiet about it when you have the right to make a change? Stand up for what you believe and cast your vote.
4. If you choose not to cast your vote, you also lose the freedom to complain. Take smart decisions and do your past, vote.
5. Feel proud to vote; voting is the right that you are given. Exercise the power that you are given; make your voice heard.
6. I am a woman. I am tried, I feel defeated, I am tired, I feel suppressed. I have been asked to shut up, but you are going to hear me roar with my vote.
7. If you have never cast your vote thinking that nothing changes, then now is the time, use this opportunity to change that.
8. Voting not only gives you the right to choose the elected representative but also become a part of the crucial decision-making process of your nation. This decision that you make affects your life daily.
9. The bullet is weaker than a ballot. Use the ballot to make a change and make your vote count.
10. If you are looking forward to a better and different tomorrow, voting allows you to make that change. Vote for a better tomorrow.
11. Voting is the most potent mechanism created by man to give others the right to fight against their injustice.
12. Voting gives you a feeling of freedom. Envision the future and cast your vote in the right manner.
13. When you vote, you are exercising power to express your opinion on an issue that you are concerned about.
14. Voting is the pillar of democracy; your vote helps in upholding the beliefs of your late countrymen.
15. Voting is not only your right but also your responsibility; cast your vote make your voice heard. 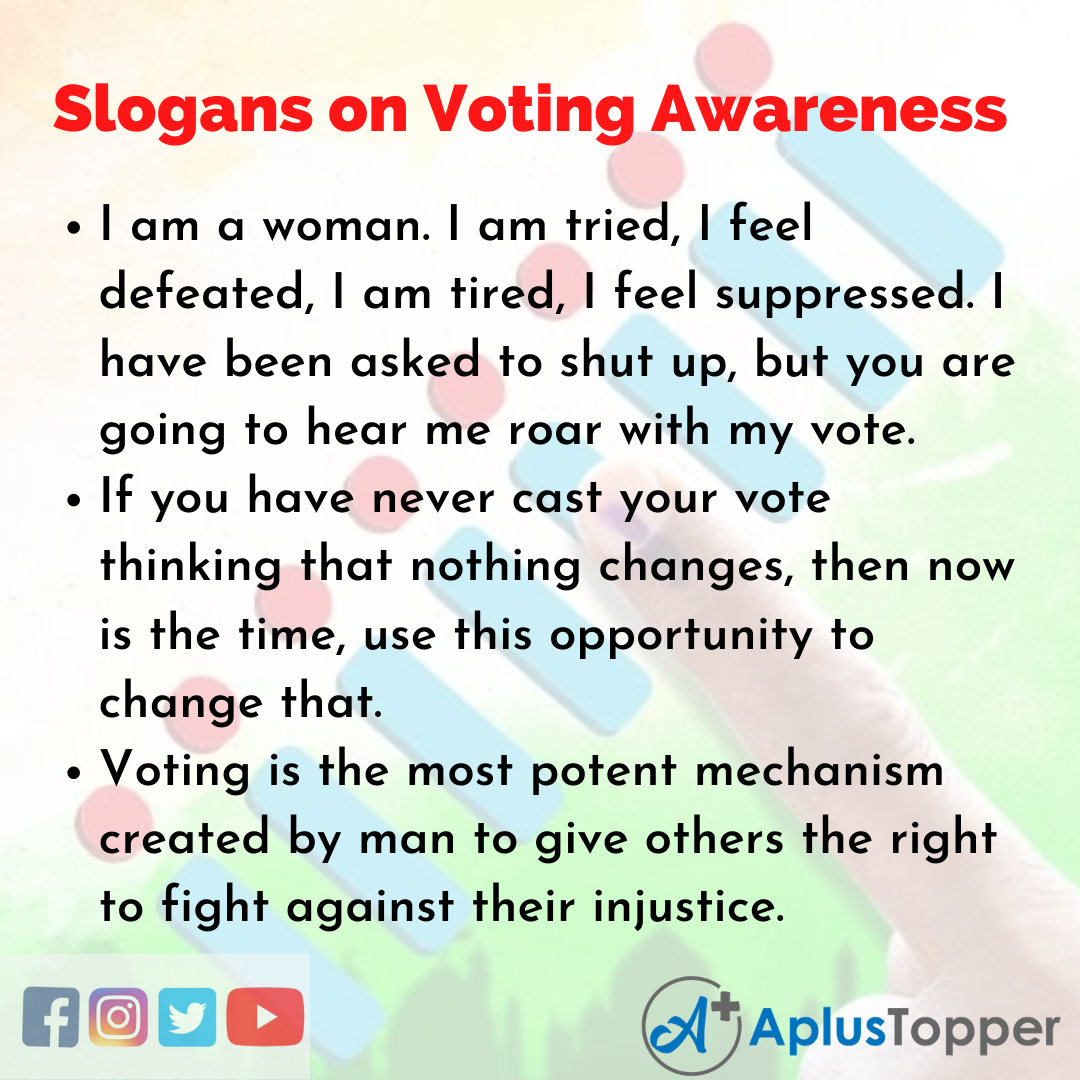 Question 1.
What does the popular vote mean?

Answer:
Popular vote is a type of indirect election in which the total number of votes that were received in the first phase of the election, in opposition to the votes cast by those that have been elected to take part in the final election.

Question 2.
What does voter turnout imply?

Answer:
The percentage of eligible voters who cast a ballot in an election is voter turnout. Eligibility of voters varies country by country, and the voting-eligible population of a country is not the total population of the country. Age and citizenship are mostly the two factors on which an individual is granted eligibility to vote. However, some countries have restrictions on eligibility on criteria such as sex, religion or race. The voter turnout race is different for different countries.

Question 3.
What is bye-election?

Answer:
A bye-election, also known as a by-election is an election held to fill an office that has become vacant between general elections. Such an election is called a special election in the United States and the Philippines and bypoll in India.