Slogans on Indian Army: Indian Army is the best instance of courageousness and great discipline in life. Indian Army began during the rule of the Britishers under the title of the ‘British Indian army.’ There are a lot of difficulties that arise in India as well as outside India, which can cause harm to the unison and safety of India. Here, the Indian Army plays a significant role in ruling out all threats and building a safe country for peaceful residence. Indian Army works on borders, but it also makes humanitarian escapes when it protects the lives of many innocent civilians.

Slogans on Indian Army in English

The efficient intelligence and reasoning capacity of the Indian soldiers make them a priceless weapon in the Army. Their stringent regime makes it attainable for them to remain in full strength and with unmatched stamina. They sacrifice their families and fight for the nation; that is what gives them unmatched respect. The Indian Army is a proud element of India because it is the reason that India is shielded from threats and secured against inside division. 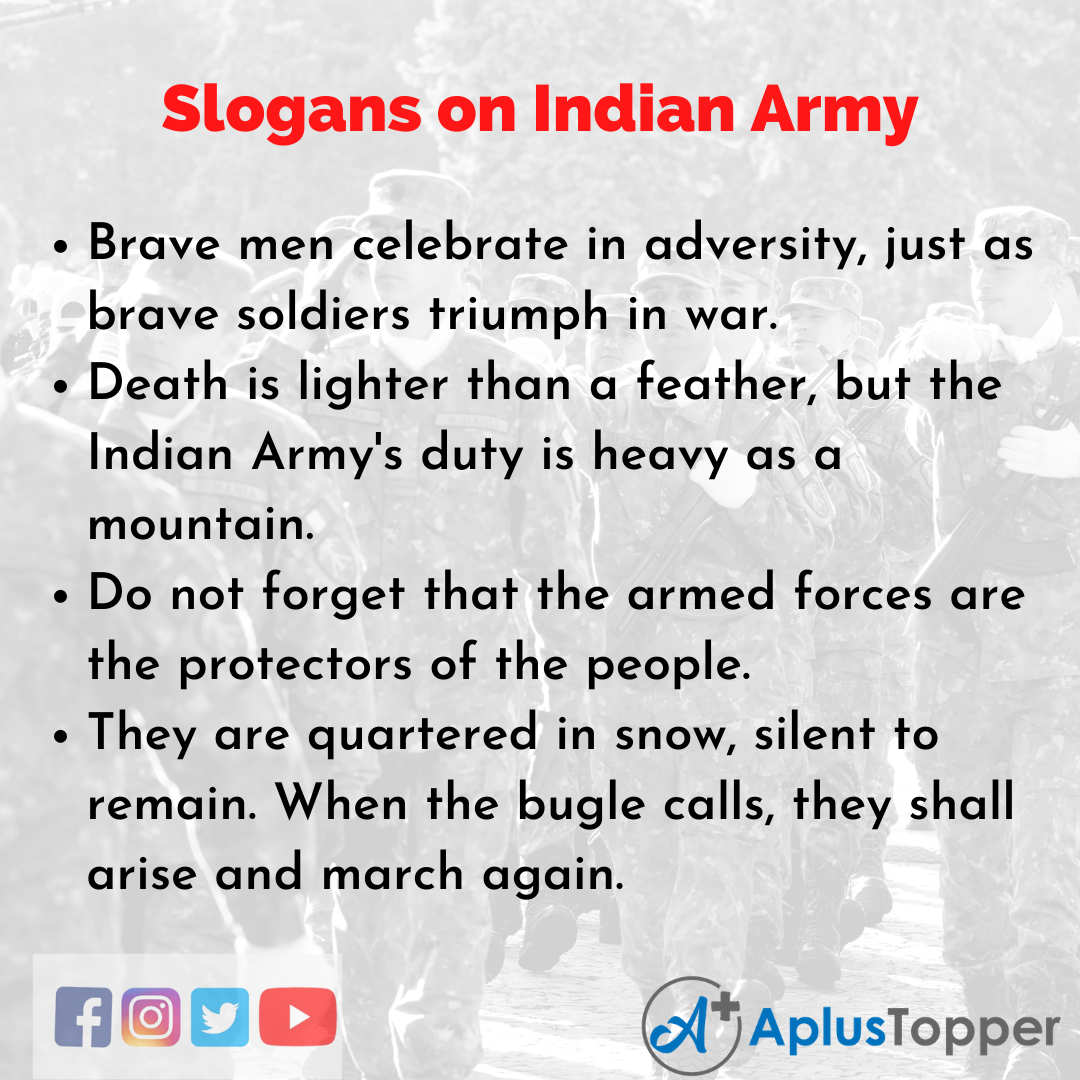 1. Brave men celebrate in adversity, just as brave soldiers triumph in war.
2. Death is lighter than a feather, but the Indian Army’s duty is heavy as a mountain.
3. Do not forget that the armed forces are the protectors of the people.
4. He will win whose Army is encouraged by the same spirit throughout all its ranks.
5. They are quartered in snow, silent to remain. When the bugle calls, they shall arise and march again.
6. Sleep peacefully at your houses, and the Army is guarding the boundaries.
7. Ten soldiers lead wisely will knock a hundred without ahead.
8. Victory normally goes to the Army, which has better-trained leaders and men.
9. You can’t expect loyalty from the Army if I do not give it back to them.
10. The harder the battle, the more grand the victory.
11. Discipline is the heart of an armed force.
12. Stand with the Army because they let you sleep in peace.
13. Celebrate the Indian Army because we don’t do enough for them.
14. The Army stays awake endless nights so that you can sleep.
15. Every we lose an army, we lose a family member. Question 1.
How did the Indian Army come into existence?

Answer:
After independence, the Ministry of Defence was formed under the supervision of a Cabinet Minister, and each Service was placed under its Commander-in-Chief. In 1955, the Commanders-in-Chief were known as the Chief of the Army Staff, the Chief of the Naval Staff, and the Air Staff Chief. In November of 1962, the Department of Defence Production was established to deal with research, development, and defense equipment production.

Question 2.
When were the later defense departments formed?

Question 3.
What is the aim of the Indian Army?

Answer:
Originally, the Army’s main aim was to defend the nation’s boundaries. However, over the years, the military has also looked into the responsibility of providing internal security, especially against insurgencies in Kashmir and Northeast India. Currently, the military is additionally working at enhancing its Special Forces abilities.

With India’s increasing international role, and therefore the requirement to guard its interests in far-off countries becomes important, the Indian Army and Indian Navy are jointly getting to found out a marine brigade. The military has been a part of four wars with neighboring Pakistan and one with China.

Question 4.
What is the significance of the Indian Army?

Answer:
The main purpose of our Army is to make sure national security and national unity, to defend the state from external aggression and internal threats, and to take care of peace and security within its borders. It’s a serious component of national power alongside the Indian Navy and the Indian Air Force.