Slogans on Gender Equality: In today’s world, there exist numerous differences between the two genders, both visible and hidden. These differences are in various forms, like having opportunities, or payments or getting benefits or only having power. The absence of such differences is gender equality.

Almost half of the population of the world is that of women. This also makes sense if we say that women are also half of the work potential of the world. The concept of gender is mostly a social construct, while sex is a biological one. The two terms are in no way interchangeable.

Slogans on Gender Equality in English

Having gender equality means that all the genders will have equality in opportunities, based on various interests and priorities. This realization dates back to the twentieth century and has been continuing ever since.

Slogans can help in grabbing the attention of the targeted audience for promoting ideas and beliefs. The importance of having gender equality is immense, and distinctive slogans will help achieve the goals of this movement. 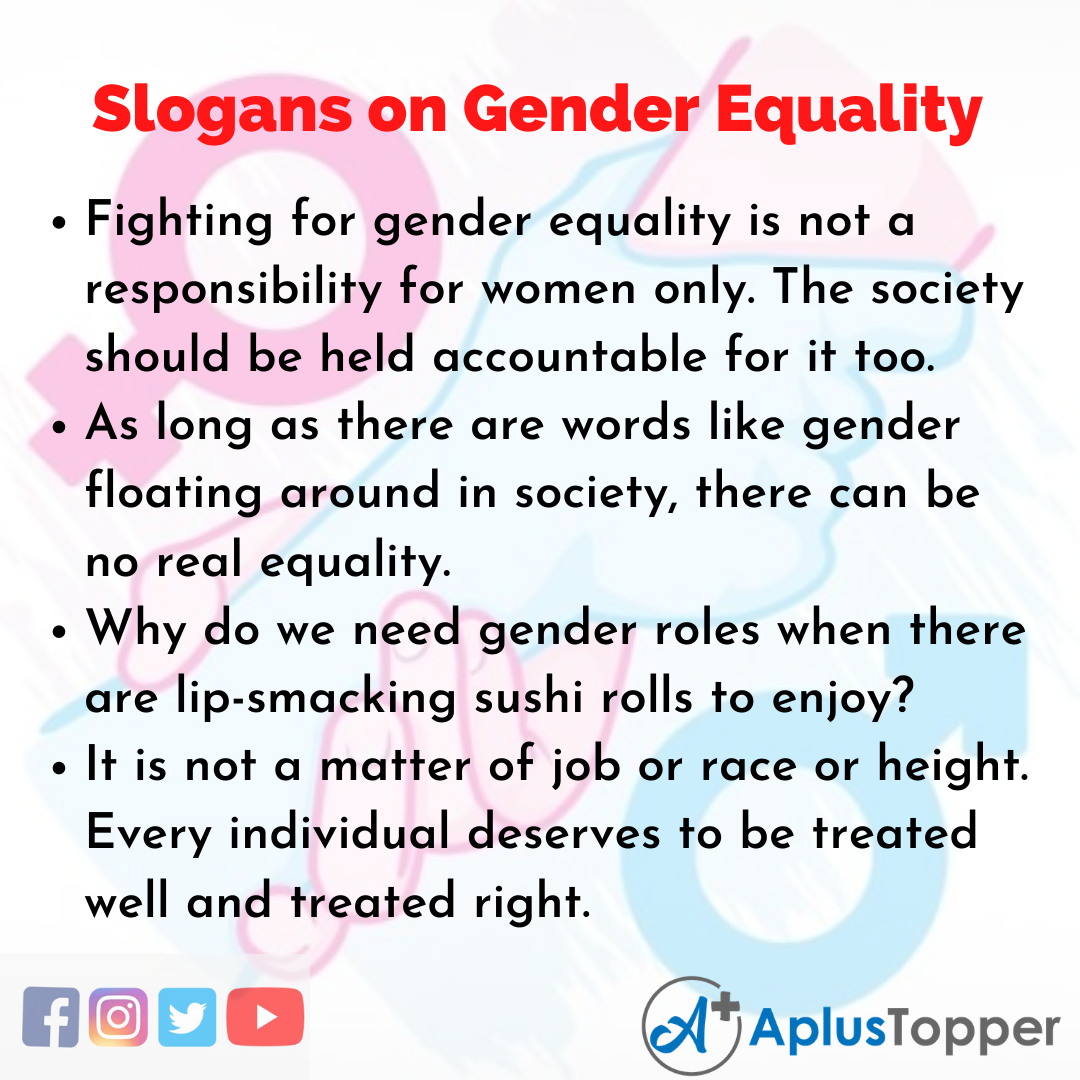 1. Fighting for gender equality is not a responsibility for women only. The society should be held accountable for it too.
2. As long as there are words like gender floating around in society, there can be no real equality.
3. Why do we need gender roles when there are lip-smacking sushi rolls to enjoy?
4. It is not a matter of job or race or height. Every individual deserves to be treated well and treated right.
5. There is a ‘man’ in every ‘woman’, a ‘he’ in every ‘she’ and a ‘hero’ in every ‘heroine’. Give her an equal opportunity, and you will see the benefit with your own eyes.
6. Move ahead of stereotypical gender binaries. Look around, and there are a lot more than masculine and feminine. Build a society that gives an equal opportunity to all.
7. Treat every man and every woman as a human. Neither is superior nor better nor more intelligent nor more hard working.
8. There will be peace and integrity in society, only when we make way for gender equality. Make a choice now or regret in future.
9. We always discriminate between the roles of men and women. The final graves that await at the end are however same for both. Why fight over superiority then?
10. We need both gender equity and gender equality for shaping a stabilized society. While equity is readily achievable, we need to fight for equality.
11. Instead of merely celebrating our heroes only why don’t we celebrate our she’roes’ too?
12. Words like masculinity, feminist, should cease to exist, and the way should be made for equality.
13. When the sun goes up, it does so for everyone. When the flower blooms, it blooms for everyone. 14. No judgment, no discrimination. So who are we to differentiate when nature doesn’t? Pledge for a better and healthier nation by stopping gender discrimination.
15. It is better to learn to appreciate and not to discriminate; a country built on good morals is a healthy one. Question 1.
Are there any differences between gender equity, gender equality and women empowerment?

Answer:
Yes, these three terms are altogether very different, and yet interlinked. Gender equity is when men and women are treated fairly by making strategies that overcome the disadvantages of women. It brings both to a fairground. Gender equality is when the genders are realized to be something different from one another, but this difference is overcome by equal treatment in all fields. Women empowerment is where women are given those opportunities that they were denied previously and helping them achieve grounds.

Question 2.
What is the meaning of gender mainstreaming?

Answer:
Gender mainstreaming is a concept that analyses the implication any policy will have on various people belonging to different genders. The proposal came in 1985, in Kenya and had two very different perspectives, institutional and discursive. This concept was brought to limelight so that the perspectives of different genders are taken into consideration when various policies are made.

Question 3.
How to achieve gender equality?

Answer:
Charity begins at home. If you look to change the perspective of the society toward gender, then begin that at your home. Talk to your children about gender, understand their conceptions about gender equality. The mothers should be empowered, and the dreams and aspirations of both your sons and daughters should be treated equally. At the institutional levels, the schools can teach gender-sensitive topics. Equal pay should be given for equal work in companies.