Slogans on Freedom Fighters of India: The history of India is coloured with the blood of the mighty freedom fighters like Subhas Chandra Bose, Bhagat Singh, Mahatma Gandhi, Sarojini Naidu, Rani Lakhsmi Bai, and many others. The struggle for freedom in India began in 1857 with a revolt against the British which was fought by the Hindus and the Muslims alike.

The freedom movement in India has a long history of almost 100 years, and included several movements like the Civil Disobedience Movement, Non-Cooperation Movement, Quit India Movement, and so many. Many brave souls gave their lives for the country, both men and women.

Slogans on Freedom Fighters of India in English

Many young lives below even the age of 20 were lost. The most heroic deaths were those of Khudiram Bose, PrafullaChaki. The slogans raised by leaders like Subhas Chandra Bose, Bankim Chandra Chatterjee helped boost the morale of the nation and brought together many to fight for freedom. 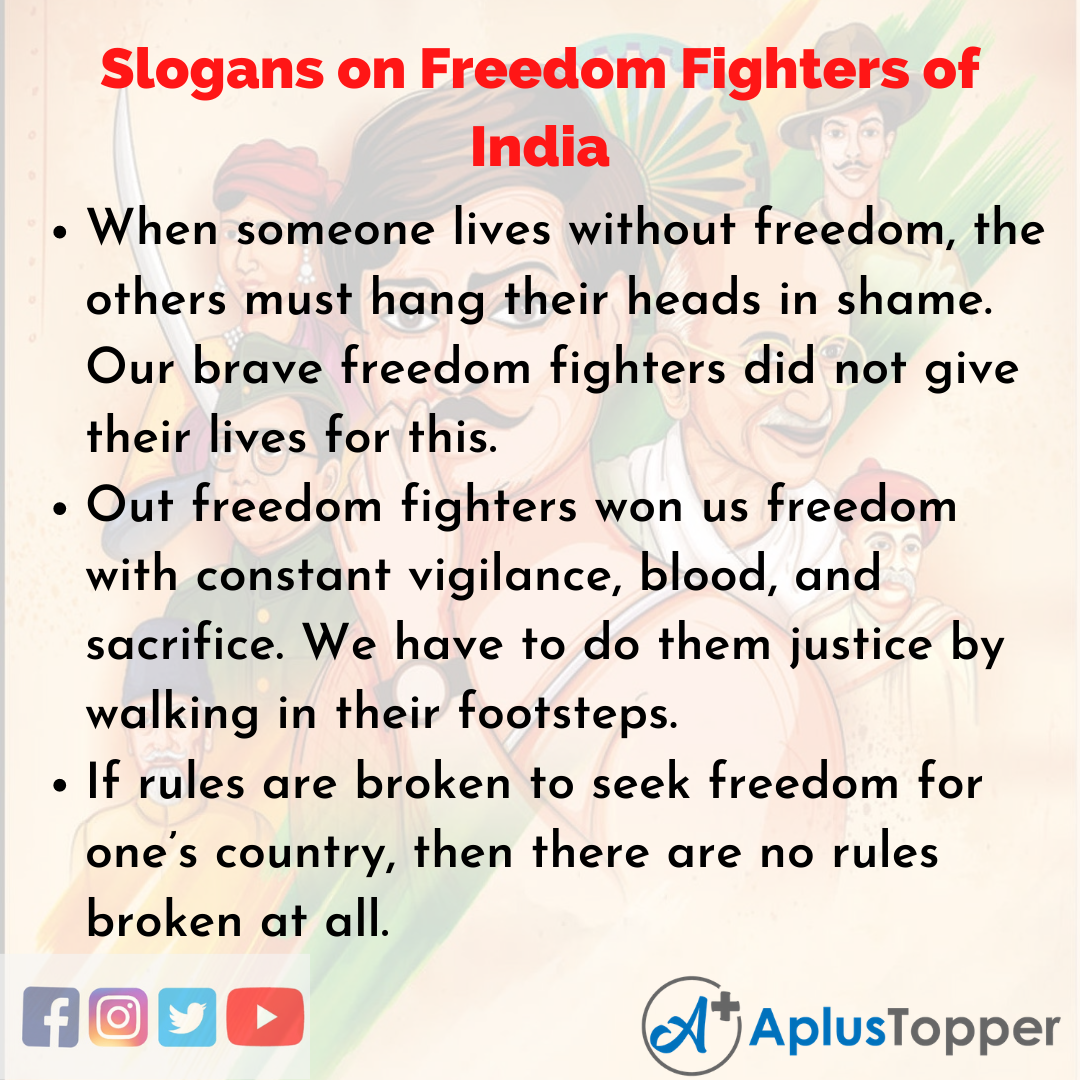 15 Unique and Catchy Slogans on Freedom Fighters of India

1. When someone lives without freedom, the others must hang their heads in shame. Our brave freedom fighters did not give their lives for this.
2. Out freedom fighters won us freedom with constant vigilance, blood, and sacrifice. We have to do them justice by walking in their footsteps.
3. If rules are broken to seek freedom for one’s country, then there are no rules broken at all.
4. One who sacrifices their life for the country, the motherland never forgets their bravado or courage.
5. One can genuinely achieve nirvana if one lives not for oneself, but their motherland. Our brave freedom fighters have succeeded in achieving so.
6. Never give away your integrity to your oppressor. Our brave freedom fighters and martyrs gave their lives so we could live freely.
7. We should be proud of what we have today. Many lives were lost to make this successful.
8. Our history has been written with the blood of many martyrs. Let us be proud of what they have achieved for us.
9. One’s dignity should never be put in line. Let the words of Gandhi and Bose flow through you and realise what freedom truly is.
10. The century-long struggle for freedom is truly a remarkable one, which gave us the taste of bold leadership of Lakshmi Bai.
11. Do not let the hard-earned freedom of Gandhi or Nehru go to waste. Be vigilant and stand firm against your oppressor.
12. Only if you question freely, you can indeed have the taste of freedom. Our leaders did so, and so must we.
13. Our freedom did not come for free; it cost us many years, many lives. Remember the sacrifices of leaders like Bhagat Singh or Subas Chandra Bose.
14. Rabindranath Tagore did not take up a sword to fight for freedom; he took up a pen. A revolutionary writer resides in each of us, and we only need to wake him up.
15. If we fail to voice up our dissent, we fail the bravado of our courageous freedom fighters. Raise your voice today or face slavery for the next eternity. 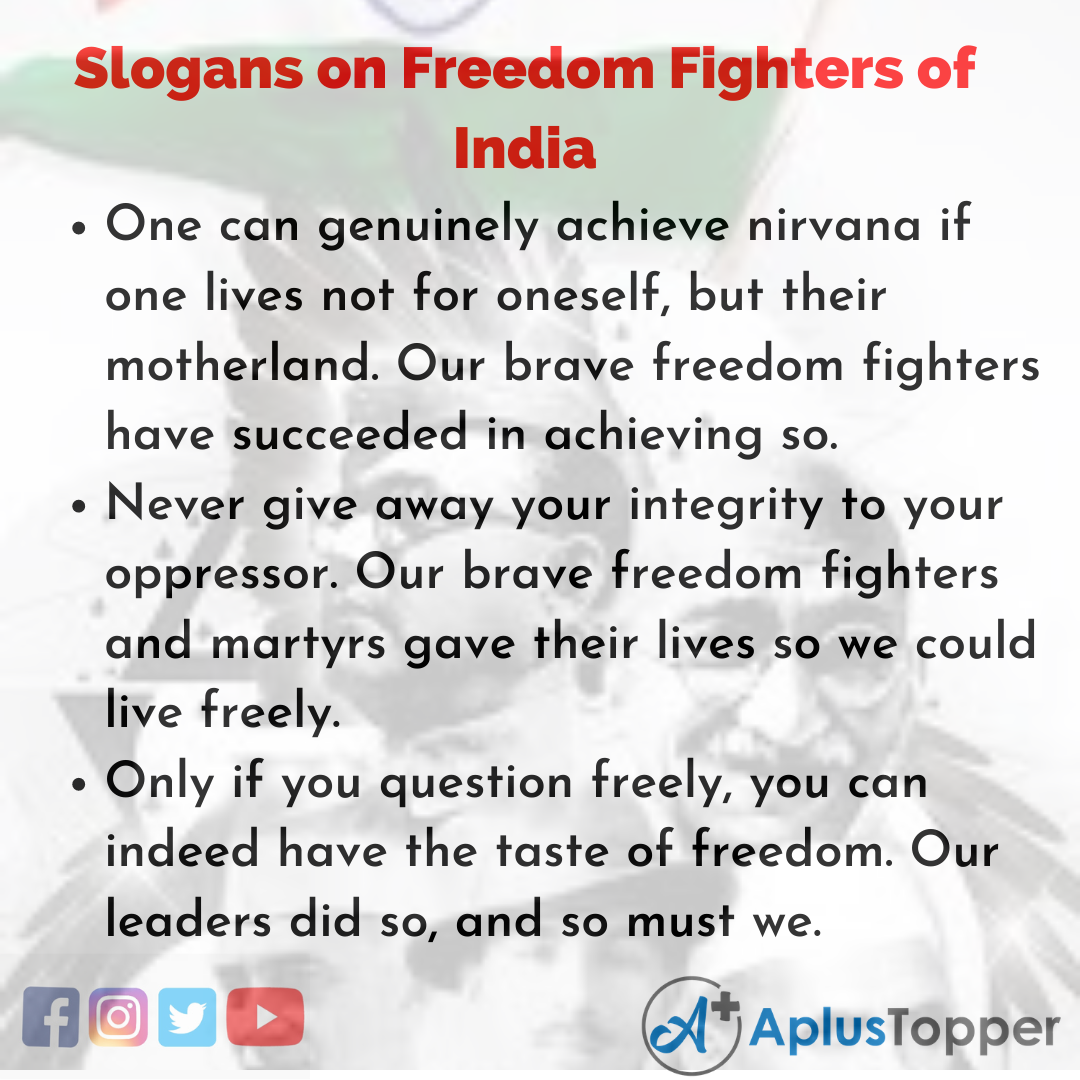 Question 1.
Who are the famous freedom fighters in India?

Answer:
Numerous freedom fighters in India rule the rich history of India with their sacrifices. Rani Lakhsmi Bai of Jhansi is one, who defended her land against the British till her death. Subhas Chandra Bose is another leader who fought for the country’s freedom and founded the Indian National Army. The father of the Nation, Mahatma Gandhi, propounded the concept of Satyagraha and led the Salt march as well.

Question 2.
What is the contribution of the freedom fighters after independence?

Answer:
Leaders like Jawaharlal Nehru, Dr Rajendra Prasad took up critical roles in administration after the hard-earned independence on 15th August 1947. The post of Presidentship of independent India went to Dr Rajendra Prasad, while the post of Prime Minister went to Jawaharlal Nehru. The constitution of India, which came a year or two later, was designed by Dr B. R. Ambedhkar.

Question 3.
Apart from the well-known leaders, who else contributed to the freedom struggle?

Answer:
Some contributors to the freedom struggle who are lesser-known would be BhikajiCama, who also fought for gender equality, Mulshi Satyagraha was led by Senapati Bapat, Begum Hazrat Mahal, who took up the leadership of Awadh and Lucknow, VinobaBhave, who was also a social reformer.