Slogans on Deforestation: The large scale removal and destruction of trees in places like forests for facilitating humans and their wants is called deforestation. The damage caused to nature because of deforestation is of great concern. Loss of biodiversity, disturbances in the water cycle, floods, destruction of natural habitats of several animal species leading to their extinction, soil erosion, etc. are the adverse effects of deforestation.

Deforestation is also a significant contributor to severe environmental issues like pollution increase, global warming and climate change. Urban expansion, mining, logging, and agriculture are the primary activities responsible for deforestation. It is high time we stop or at least reduce all human activities that cause deforestation if we want to give our future generation a chance of survival.

Slogans on Deforestation in English

The extent of damage of deforestation is to the extreme that even if deforestation is brought to a complete stop at present, it would still not be enough to restore the earlier form of nature. The Amazon rainforest is responsible for 20% of the world’s oxygen supply (this is why Amazon is called Earth’s lungs), but it loses approximately 1.32 acres of the area every minute due to deforestation. To revive Earth into its healthy condition, we will not only need to stop cutting down of trees but also start active reforestation because it is the only way to reduce the damage caused due to deforestation. 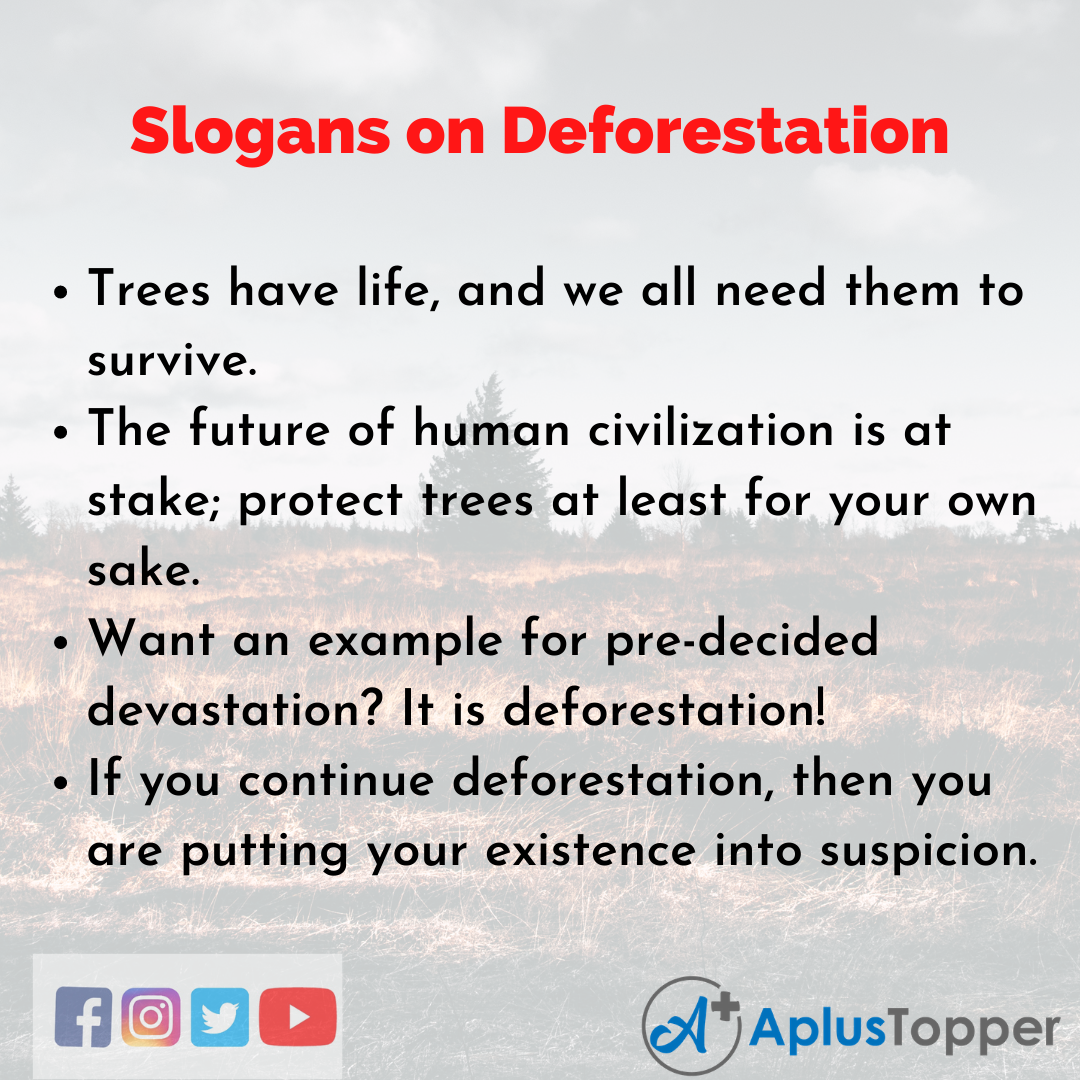 15 Unique and Catchy Slogans on Deforestation

1. Trees have life, and we all need them to survive.
2. The future of human civilization is at stake; protect trees at least for your own sake.
3. Want an example for pre-decided devastation? It is deforestation!
4. If you continue deforestation, then you are putting your existence into suspicion.
5. Deforestation will steal all that is good like shade, air, rain and food.
6. People say they love flowers, yet they pluck them. People also say they love trees, yet they cut them.
7. If you are cutting down trees, then remember your children will have to pay the fees.
8. The lighter you take the subject of deforestation, the greater will it cost in future.
9. Save the nation and stop deforestation.
10. Speed up your extinction with deforestation.
11. Drop seeds, not trees.
12. Animals are asking you, please, stop cutting the trees.
13. Invest in your green gold, put deforestation on hold.
14. Cut your greed, not the greenery.
15. If you destruct the green, then there will be nothing left serene. 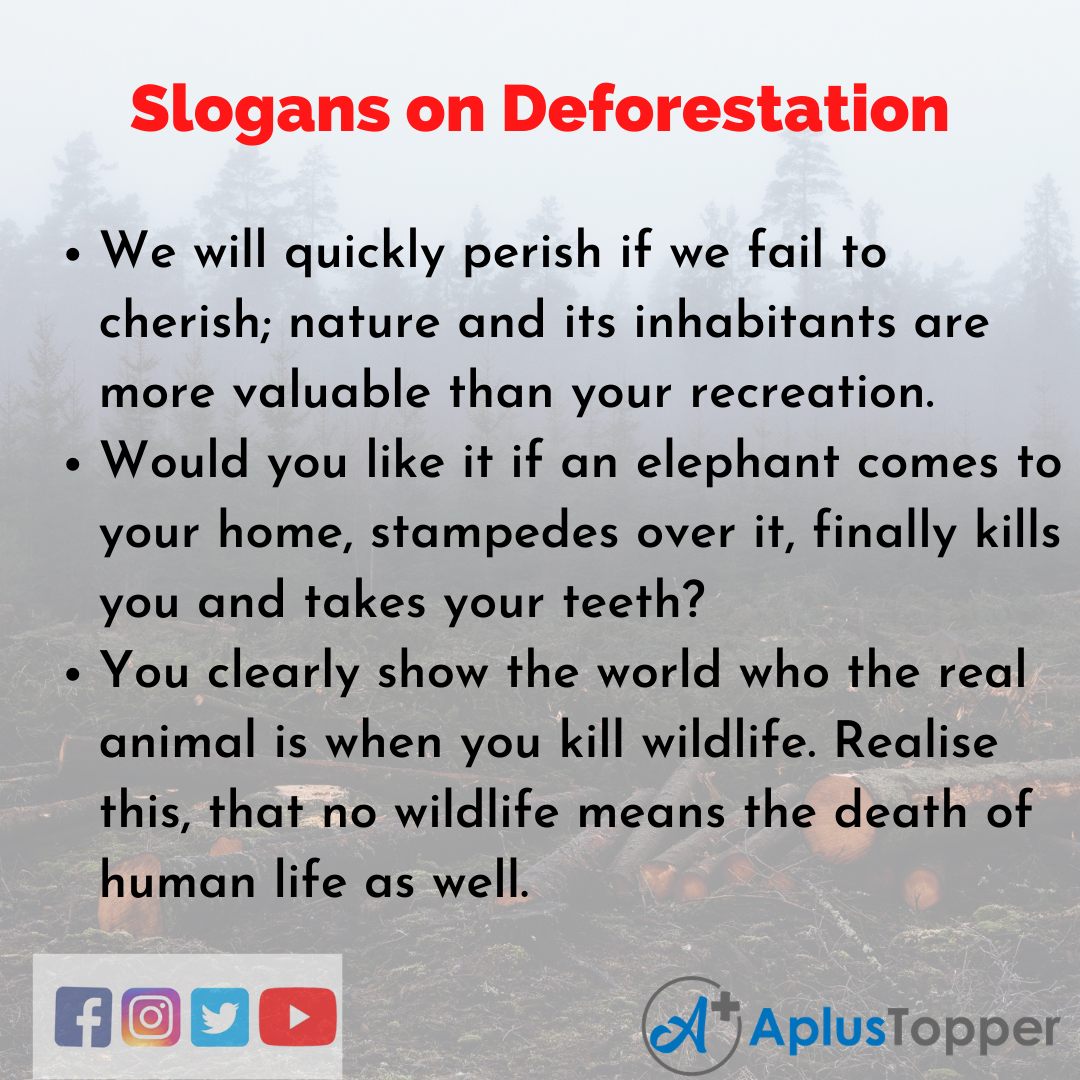 Question 1.
How can a single common individual help in reducing deforestation?

Answer:
A single individual’s efforts can also bring in a significant change. Remember the sea is made up of million droplets of water, and that is why every drop of help matters. The following are a few practices that one can adopt to reduce the demand for forest products.

Question 2.
State some of the negative impacts of deforestation.

Answer:
There are several adverse effects of deforestation among which the following are a few to mention:

Question 3.
What are some of the natural causes of deforestation?

Question 4.
Give an estimate of the number of trees cut down every day.

Answer:
It is impossible to get an accurate count for the number of trees being cut down every day because it is not reported. However, an approximate calculation can be done by determining the tree density of the forests, and it is said that about 3.5 billion to 7 billion trees are cut down per year.

Question 5.
How does deforestation put off the balance of nature?

Answer:
Deforestation causes the reduction of oxygen production as well as a decrease in water transpiration, which means the water cycle is affected. Also, the amount of carbon dioxide in the environment increases when photosynthesis does not occur due to cutting down of trees.