(a) Powdered sodium chloride (common salt) does not conduct an electric current, but it does so when dissolved in water or when melted.

(c) Substances which conduct electricity in the solid state are generally metals.

(d) The electron releasing tendency of zinc is more than that of copper.

(a) Electrolysis: It is the process of decomposition of a chemical compound in aqueous solutions or in molten state accompanied by a chemical change using direct electric current.

(b) Non-electrolyte: It is a compound which neither in solution nor in the molten state allows an electric current to pass through it.

(d) Weak electrolyte: Electrolytes which allow small amount of electricity to flow through them and are partially dissociated in fused or aqueous solution are called weak electrolyte.

(a) Difference between Modern explanation and Arrhenius explanation for the theory of electrolysis:
Arrhenius considered that water ionizes electrolytes but Modern theory explained that electrolytes are ionic even in solid state and their ions are held by strong electrostatic forces which make them immobile. Water renders these ions mobility by breaking the electrostatic forces.

(b) Difference between electrolytic dissociation and ionization :

Thermal dissociation: Reversible breakdown of a chemical compound into simpler substances by heating it. The splitting of ammonium chloride into ammonia and hydrogen chloride is an example. On cooling, they recombine to form the salt.

(a) Cane sugar is a compound which does not have ions even in solution and contains only molecules. Hence, it does not conduct electricity. On the other hand, sodium chloride solution contains free mobile ions and allows electric current to pass through it. This makes it a good conductor of electricity.

(c) Hydrogen is placed lower in the electrochemical series and sodium is placed at a higher position. This is because H+ ions are discharged more easily at the cathode than Na+ during electrolysis and gains electrons more easily.
Therefore, H+ ion is reduced at the cathode and not Na+ ion.

(a) Zn occurs readily as ion whereas Cu occurs more readily as metal in nature.

(b) Copper is above silver in the electrochemical series and is thus more reactive than silver. So, copper displaces silver from silver nitrate. Hence, we cannot store AgNO3 solution in copper vessel.
Cu +AgNO3 → Cu(NO3)2 + 2Ag


(d) No change in colour is observed.

(e) Dilute sulphuric acid catalyse the dissociation of water molecules into ions, hence electrolysis of acidified water is considered as an example of catalysis.

(a) Labelled diagram of electrolytic cell is: 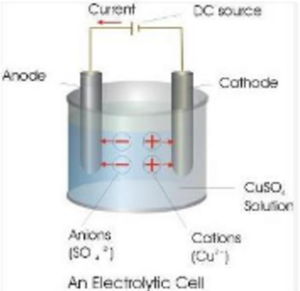 
(f) Concentrated HCl,
HCl in the pure liquid state is unionised and hence does not conduct electricity.

(a) During electrolysis of lead bromide, there is loss of electrons at anode by bromine and gain of electrons at cathode by lead. Thus oxidation and reduction go side by side. Therefore, it is a redox reaction.
PbBr2 → Pb+2 + 2Br–

(b) The blue colour of copper ions fades due to decrease in Cu+2 ions and finally the solution becomes colourless as soon as Cu+2 ions are finished.

(d) Aluminium has great affinity towards oxygen, so it is not reduced by reducing agent. Therefore it is extracted from its oxide by electrolytic reduction.

(f) This is because HNO3 is volatile.

(g) Ammonia is a covalent compound. Therefore, it is unionized in the gaseous state but in the aqueous solution it gives NH4OH which is a weak electrolyte and dissociates into ions.

(h) Graphite is unaffected by the bromine vapours.

(i) Silver nitrate is not used as electrolyte for electroplating with silver because the deposition of silver will be very fast and hence not very smooth and uniform.

(j) Carbon tetrachloride is a liquid and does not conduct electricity because it is a covalent compound and there are no free ions present and contain only molecules.

Water is a non-conductor of electricity and consists entirely of molecules. It can be electrolytically decomposed by addition of traces of dilutesulphuric acid which dissociate as H+ and SO42- ions and help in dissociating water into H+ and OH–, water being a polar solvent.

(b) CuSO4 is preferred as an electrolyte.

(c) The copper anode continuously dissolves as ions in solution and is replaced periodically. The electrolyte dissociates into Cu+2 ions which migrate towards the iron object taken as the cathode and are deposited as neutral copper atoms on the cathode.
Electrolyte: Aqueous solution of nickel sulphate
Dissociation: CuSO4 → Cu2+ + SO42-
H2O → H+ + OH–
Electrodes:
Cathode: Article to be electroplated
Anode: Block of pure copper
Electrode reactions:
Reaction at cathode: Cu2+ + 2e–→ Cu (deposited)
Reaction at anode: Cu – 2e–→ Cu2+

(a) Because Copper is an electronic conductor as it is a metal.
(b) In solid sodium chloride, Na+ and Cl – ions are not free due to strong electrostatic forces of attraction among them. The ions, therefore are unable to move to any large extent when electric field is affected. Hence no current.

(a) (i) The name of electrode A is Platinum anode and that of electrode B is platinum or copper cathode.
(ii) Anode act as oxidizing electrode.
(b) AgNO3 solution will turn blue.

(a) The reaction takes place at anode. This is an example of oxidation.
(b) Cu+2 will discharge easily at cathode.
Reaction at cathode:
Cu+2 +2e– → Cu
(c) Carbon tetrachloride is a non-electrolyte because it is a covalent compound. It does not ionize and hence do not conduct electricity.

(a) Non-electrolyte contains molecules.
(b) Molecules of HX and H+ and X– ions.
(c) Loss
(d) The electrolyte used for the purpose must contain the ions of metal which is to be electroplated on the article.
(e) The reaction at the cathode involves reduction of cations as they gain electrons to become neutral atoms while that at anode involves oxidation of anions as they lose electrons to become neutral.
Example: Dissociation of sodium chloride during electrolysis.
NaCl → Na+ + Cl–
At cathode: Na+ + e– Na (Reduction)
At anode: Cl– – e– → Cl(oxidation)
Cl + Cl → Cl2
Overall reaction: 2NaCl → 2Na + Cl2

Hydrogen gas is released at cathode when acidulated water is electrolyzed.

During the electrolysis of molten lead bromide. Lead is deposited at cathode.