Solution A.1.
(d) Use of antibiotics and prophylactic vaccinations

Solution C.2.
It is approximately 7 billion.

(a) Birth Rate: It is the number of live births per 1000 people of population per year.

(b) Death Rate: It is the number of deaths per 1000 of population per year.

(d) Population density: It is the number of individuals per square kilometre (Km2) at any given time.

Solution C.4.
(a) False.
Dog was the first domesticated animal.

(b) True.
Rapidly growing industries made human life more and more comfortable, with greater opportunities of jobs and with more production of food. All this favoured population rise.

(d) False.
Birth Rate (natality) is the number of live births per 1000 people of population per year.

Solution C.6.
By law the minimum age is 21 years for boys and 18 years for girls.

Solution C.9.
Population growth is not the only threat humanity is facing, but it will be a major contributor to the crises that await us and the planet in the coming century. Overpopulating the planet puts us all at risk of extreme environmental and social consequences that we are beginning to witness today. The extreme growth in human population is mortally taxing the Earth and its resources. Each individual person has a unique impact on the planet’s environment. Some people may be relatively less damaging than others, but no living individual is without an ecological footprint. In other words, each person needs basic resources and almost all people aspire to utilize significantly more resources than are required by their basic needs. As a result, the Earth is attempting to impose its own checks on human population. We can witness these “checks” in the form of widespread disease and the emergence of new disease strains, food and water shortages, poor harvests and violent and destructive weather caused by climate change. While it should be obvious that the Earth is a finite sphere and cannot endure infinite growth by any single species, we should also remember that Earth’s current web-of-life is the result of billions of years of complex evolution. It is irreplaceable. When we look forward to the next 40 years, the most significant population increases will take place in the areas of our world where natural resources and the infrastructure of modernity are already the scarcest. 95% of the human population growth is occurring in countries already struggling with poverty, illiteracy and civil unrest. It will further stress, the already strained ecological systems and worsen poverty in much of the developing world, thus aggravating threats to international security.

Thus, the statement made by an author ‘some great author has said that a population explosion is far more dangerous than an atomic explosion’ is true.

Solution C.10.
Poverty and population have been closely linked ever since the world faced changes due to the major revolutions. Poverty has its own effects on the population and vice versa. Poverty prevails because of illiteracy and traditional beliefs in the economically weaker strata. Since illiteracy and traditional beliefs prevail the people from this stratum, they regard children as gift of God and a sign of prosperity. They consider children to be helping hands in increasing the family income, hence they keep producing more children forgetting that their current situation would do no good for the children and they would add more to this already overburdened poverty strata. Hence, the population keeps on rising and so does poverty. As the population increases the quality of life goes down.

Solution C.13.
Yes, there could be a corresponding operation made in women. The name of the surgical procedure in females is ‘tubectomy’. In tubectomy, the abdomen is opened and the fallopian tubes (oviducts) are cut or ligated i.e. tied with nylon thread to close the passage of the egg. 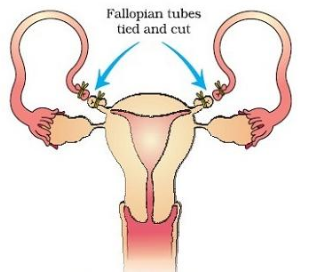 Solution C.14.
Family welfare centres are those places where any help or advice about family planning is available free of cost. These places could be any hospitals, dispensaries, etc. The inverted red triangle is the symbol of family welfare in India.

Solution C.15.
Below are some of the advantages of having a small family:

Solution D.3.
For developing countries like India, population explosion is a curse and is damaging the development of the country and its society. The developing countries are already facing a lack in their resources, and with the rapidly increasing population, the resources available per person are reduced further, leading to increased poverty, malnutrition, and other large population-related problems. The literal meaning of population is “the whole number of people or inhabitants in a country or region”, and the literal meaning of population explosion is “a pyramiding of numbers of a biological population”. As the number of people in a pyramid increases, so do the problems related to the increased population. Some of the reasons for this population explosion are poverty, better medical facilities, and immigration from the neighboring countries. The population in India continues to increase at an alarming rate. The effects of this population increase are evident in the increasing poverty, unemployment, air and water pollution, and shortage of food, health resources and educational resources.