Essay on Rani Lakshmi Bai: An unforgettable woman warrior figure in Indian history is our Rani Lakshmi Bai, who was well known as Rani of Jhansi, which means The Queen of Jhansi. She was born in Varanasi (also known as Kashi) and married off to Maharaja Gangadhar Rao, but was soon widowed before they could inherit an heir.

Rani Lakshmi Bai proved her valor and heroism in the 1857 rebellion against the Britishers, and this battle was also declared as the ‘First War of Independence.’ She died a hero and as one of the most contributing personalities at only the age of 29.

To help students for writing an essay on the topic ‘Rani Lakshmi Bai,’ we have presented them with long and short essay samples. Along with this, we will also provide ten pointers on the theme that will work as guidance for framing the essay.

This long essay will be helpful for students in classes 7, 8, 9, and 10 for their assignments or as an examination essay reference.

Manikarnika was a Brahmin girl born to Moropant Tambe and Bhagirathi Tambe on 19th November 1828 in Kashi (the now Varanasi). She was also called Manu Bai when they moved to the Bithoor district in Uttar Pradesh because her father started working as an adviser in the Peshwa Baji Rao’s court, after the death of her mother. Manu Bai spent her childhood training in martial arts, horse riding, fencing, shooting, and playing with Nana Sahib, Tantia Tope, Rao Sahib, and other boys in the Peshwa’s court. Manu Bai was very fond of horse riding, and she had two mares, namely Pavan and Sarangi, and a horse named Badal.

The fourteen-year-old Manikarnika was married to Maharaja Gangadhar Rao Newalkar in 1842, who was the king of Jhansi. After marriage, she was named Lakshmi Bai (also spelled as Laxmi, who is the Hindu Goddess of wealth). Bai is the honorable title given to the Queen or the ‘Maharani’ of the kingdom. In 1851, Lakshmi Bai gave birth to Gangadhar Rao’s son and named him Damodar Rao, but unfortunately, after four months, the child died due to chronic illness. Soon after, Maharaja adopted his cousin’s son Anand Rao, yet he could not recover from the depression of his son’s death and ultimately die in 1853.

You can access more Personality/people Essay Writing on this given topic and many others.

The British Government saw the Maharaja’s death and a loss of direct bloodline heir as an opportunity to occupy Jhansi. The British East India Company introduced the Doctrine of Lapse, and Governor-General in India implemented this policy (from 1848 to 1856). The doctrine stated that ‘if the ruler of a princely state under the direct or indirect control of the East India Company died without a legal male heir then the state would be annexed by the Company.’ Rani Lakhsmi Bai was irked by the unfairness of the British Rule, and she even pleaded at the London court, but of course, was turned down, and the British only agreed to grant her an annual pension that her adopted son won’t be given to after her death.

Rani Lakshmi Bai was not willing to give up her fort and kingdom, and in 1857 she bravely fought against the British Army (lead by General Hugh Rose) with her son tied to her back and riding on her horse Badal. Her army consisted of 14000 rebellions and some famous figurines like Tantia Tope, Nana Rao Peshwa, Dost Khan, Gulam Gaus Khan, Deewan Raghunath Singh, Khuda Baksh, Deewan Jawahar, and many more. Some famous woman warriors that joined Rani Lakshmi Bai’s forces were Jhalkari Bai, Sundar-Mundar, and others.

After gallantly fighting with the British Troops, Lakshmi Bai is allegedly said to have died in action or due to her severe injuries in 1858. Later her guards had secretly cremated her for she didn’t want her body to be discovered by British troops. 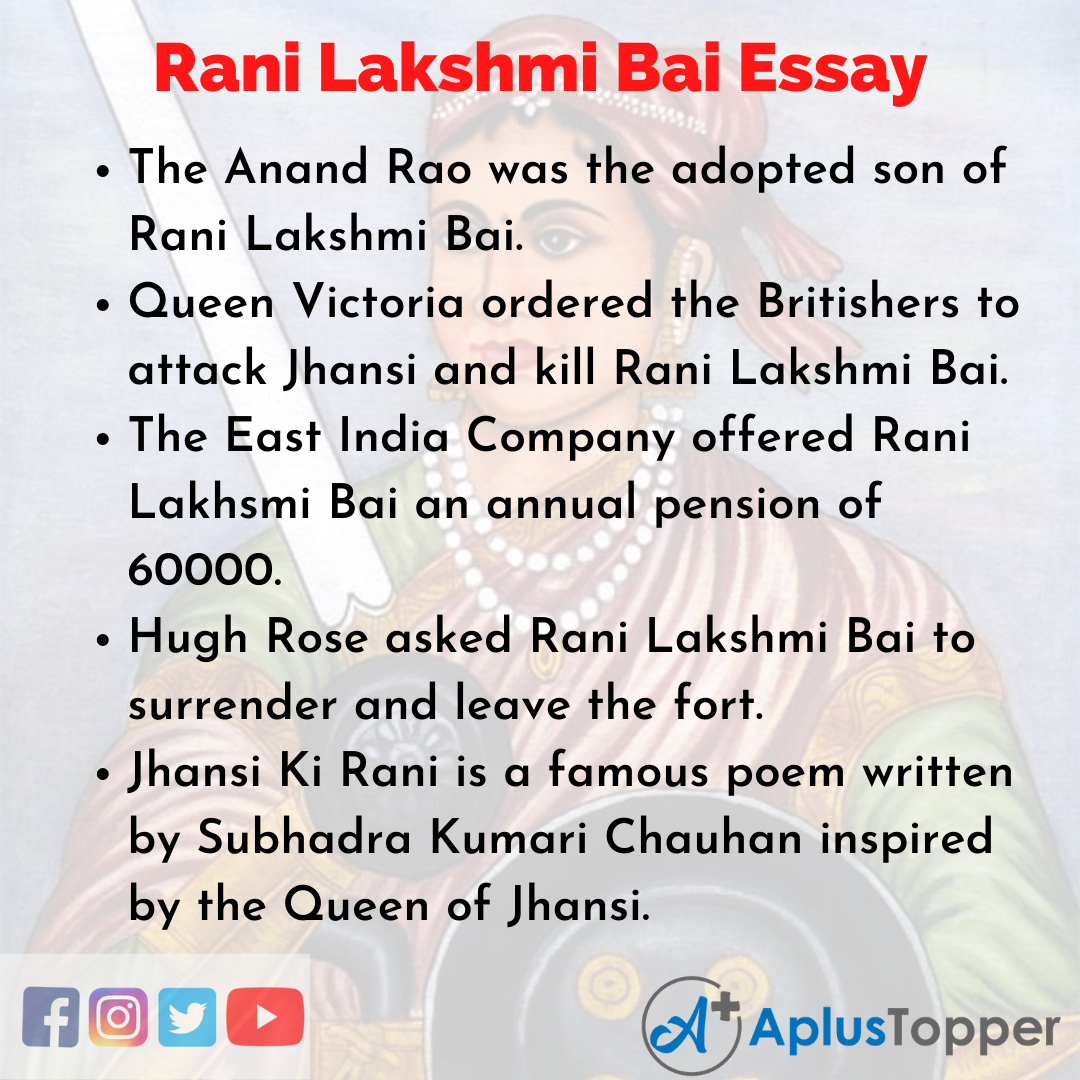 Rani Lakshmi Bai, also popularly called as ‘Jhansi Ki Rani’ was born in Varanasi in 1828 and died in 1858, Madhya Pradesh. Her birth and the maiden name was Manikarnika, which after her marriage with Maharaja Gangadhar Rao in 1851, was changed to Lakshmi Bai. Her adopted son was Anand Rao, whom the king and queen later named after their deceased son Damodar Rao.

The Britishers and Rani Lakshmi Bai engaged in the so-called ‘First war of Indian Independence’ in 1857, where Lakshmi Bai declared the war with the slogan ‘Main Jhansi Nahi Dungi’ which means that ‘I will not hand-over Jhansi.’ She was joined by her childhood friends and notable freedom fighters Tantia Tope and Nana Sahib, in the battle against the British troops. After fearlessly fighting in the war Rani Lakhmi Bai even though died physically, but will always be remembered as one of the bravest warriors in Indian history.

Question 2.
What are some of the new controversial contents written on Rani Lakshmi Bai?

Answer:
Books like Manu and Queen of Glory by Christopher Nicole, the Rebel Queen by Michelle Moran, La Femme Sacree by Michel de Grece, The Rane: A legend of the Indian Mutiny by Gillean, the Queen’s Desire by Hume Nisbet, etc. are a few contents that are inspired by Rani Lakshmi Bai but are also highly controversial.

Question 3.
At what age did Rani Lakshmi Bai marry the king of Jhansi?

Answer:
Rani Lakshmi Bai married Raja Gangadhar Rao in 1851 when she was only 14 years old, and in 1853 she was widowed with Maharaja’s death.

Answer:
Rani Lakshmi Bai gave birth to her and Raja Gangadhar Rao’s son Damodar Rao, but due to some chronic illness, the child died at the age of only four months. After that, Gangadhar Rao adopted his cousin’s son Anand Rao and named him Damodar Rao.