Population Growth Essay: Population refers to the total number of people living in a region at a particular time. The society has experienced exponential population growth over time. There are currently a total of 7.7 billion people on this planet, and India homes 1.3 billion people and is the second-largest populous country after China. In India, Mumbai is the top populated city with 12 billion people and Delhi, the next with 11 billion people.

Population growth has become a pressing issue in the world, as well as our country today. This is because a growing population requires a growing economy and has increasing needs. Therefore, the large population becomes a problem when the state lacks enough space, enough food, and necessary supplies to live off.

Thus, population growth needs to be administered carefully for the betterment of people.

The below- mentioned long essay on population growth is for pupils aspiring for competitive exam and those belonging to classes 6,7,8,9, and 10, respectively. The essay guides the students with their class assignments, comprehension tasks, and even for competitive examinations.

Population growth is one of the driving forces behind all the environmental problems, as a growing population needs a considerable amount of non-renewable resources for its existence. If there are more births over deaths, then there is population growth, while more deaths over childbirth lead to a decrease in population growth.

With the onset of the Industrial revolution, the improvement in the field of food supply and health care has to the rapid growth of the human population. The rate of population growth has slowed down in industrialized countries but continues at an exponential rate in the developing and more impoverished countries.

There are huge problems that are the root cause of India’s population growth. Factors such as mortality and fertility rates, child marriage, boy’s importance, ignorance about family planning, rational decisions, polygamy marriage, and the age and sex factors of the present population influence population growth.

With time, humans have made notable and significant advancements in the field of technology, science, and medicine. With the invention of treatments, vaccines, and the eradication of various diseases, people today have a higher life expectancy than their forefathers.

These inventions have also led to a decrease in mortality rates, boosted fertility rates, and have solved reproductive and infertility problems. Hence the massive improvements in birth rates and slowing mortality rates have been the main reason behind overpopulation problems.

The exponential growth in population has caused severe effects on our planet. The most common and current impact of population growth is the limited quantity of natural resources, mainly fossil fuels. Due to the population explosion, resources are decreasing, becoming rarer, and will run out entirely.

The overgrowth in population has led to massive effects such as industrialization, pollution, and unemployment. These components have adversely affected our environment leading to various health problems in society.

Deforestation of spaces has destroyed the natural habitats of species and has disturbed ecological balance. And with the rapid increase in population, pooper nations suffer famines and various other natural disasters due to a shortage of food and other resources. Another adverse effect is global warming and climate change, which are the significant consequences of the increasing population.

To control population growth, people around the world need awareness on family planning values, the ill-effects of global overpopulation, and the sustainable growth values. Awareness programs and rewards might boost the knowledge of population growth.

In short, Population growth declines the overall financial and economic conditions and deterioration of populated nations. 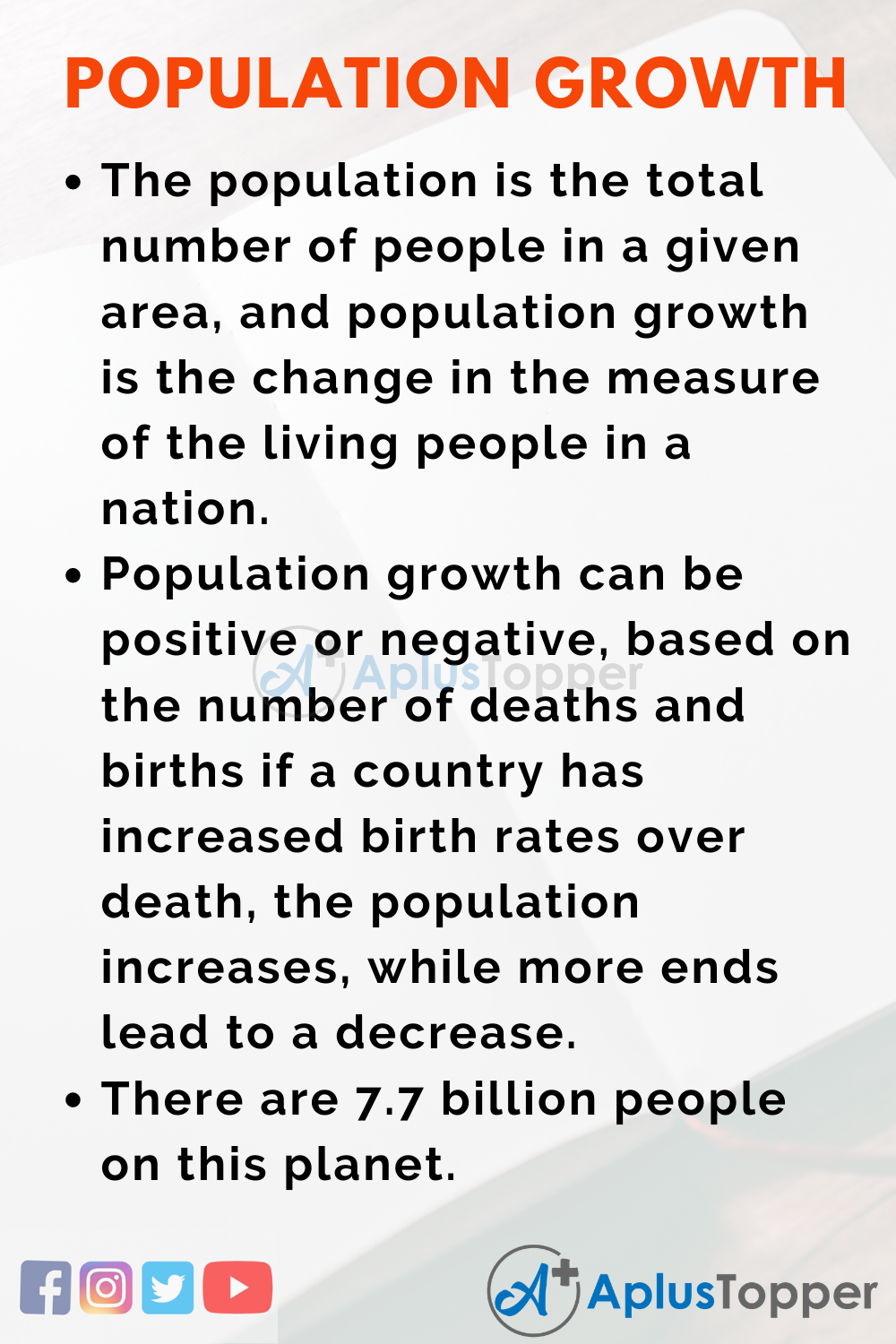 The 200 words short essay mentioned below is suitable for kids and classes of 1,2,3,4,5 and 6. The essay is written to guide the children with their school works-assignments and comprehension exercises.

The population is the total number of people living in a particular geographic area. The population is the cause of concern in many nations. Population growth demands more resources, such as fossil fuels, vegetation, shelter space, etc. Our plant is gradually running short of funds. India ranks second as the most populated country with 1.3 billion people.

There are various reasons behind the exponential population growth. Illiteracy plays a significant role as the majority of India’s rural section is illiterate. They lack awareness of factors such as family planning and child marriage and indulge in early marriage and reproduction.

Due to the advancement in Technology, Medicine, and Science, another main reason for overpopulation is decreased mortality and increased fertility rate. These factors of population growth lead to severe effects on the environment.

Population growth has lead to the rise of many industries, which causes harmful impacts like unemployment, deforestation, increased water and air pollution, ecological imbalance, global warming, and climate change.

People must control population growth, and this is possible only through education and awareness. The government of India should create awareness, eradicate illiteracy, and educate people on essential topics like birth control and family planning values. They must encourage the education of all the social classes to stop the rise in population.

Thus, we need to take adequate measures to control population growth and save our planet. Question 1.
What does the term ‘Population growth’ mean?

Question 2.
Which country has the highest population growth?

Answer:
China has the highest population growth, with 1.40 billion people.

Question 3.
At what rate is the Population growth in India?

Question 4.
What are the harmful effects of increasing population growth?