Essay on Population: Population is the most prominent problem of this century. The population of any country or region is the total number of people living in that country or region. The question of the population persists in almost all the nations of the world. The most populated countries as of now are China, India, and the USA. The problem of population irrespective of any country arises because of resources. In most states, due to scarcity of resources, individuals face a lot of difficulties. There have been various population control measures implemented by countries at different times.

Population control methods that have been devised and implemented included educating people on population and effective ways of birth control. Here we have added two essays on the topic which are for the benefit of students in case of their exams. Population growth has become a pressing issue in the world, as well as our country today.

An increase in population makes it difficult for a state to provide everyone with the bare minimum necessities. The problem of population pressure is, however, different in countries across the world. In the wealthy countries of the world, population pressure is manageable because of the wealth that it has. In developing nations, a significant increase in the population over time makes it difficult for the country to establish itself. This is because the majority of the increased population consists of people who are poor and have no education or social security. To take care of their interests, the country fails to grow individually.

The population of the country influenced by two factors-migration and education. As far as migration is concerned, people often migrate from one country to another for various reasons. Students often migrate to other countries for education. Young people often migrate to advanced countries through their work.  Such individuals usually tend to settle down in such countries for the rest of their lives. Their main reason for settling is social security and income opportunities. There are also other facilities which people of first world countries get by their economy.

The migrated population often does not wish to leave such facilities.  This leads to population pressure. In countries like India, the population increases every year due to the lack of primary education. The idea of nuclear families has not yet reached most of the people living in villages. In little places, people are not aware of the problems of having excess kids. Such people, however, have their logic behind their exercise. Due to abject poverty, they often think that having many kids would solve their economic problems. This thought on their part stems from the fact that their children would grow up and feed them for the rest of their lives. But often they fail to recognize that this leads to a burden on the whole of the country. Often developing nations undertake programs for educating the masses about the problems of overpopulation and its consequences.

The best way to tackle an increasing population is to engage in birth control measures. Such measures include an enormous amount of social control as well as other medical devices that control the birth rate of a country. Medical procedures can often control population, but such practices are not highly regarded. This is because they usually do not consider the medical rights of an individual, and there are high chances of dying during such procedures. 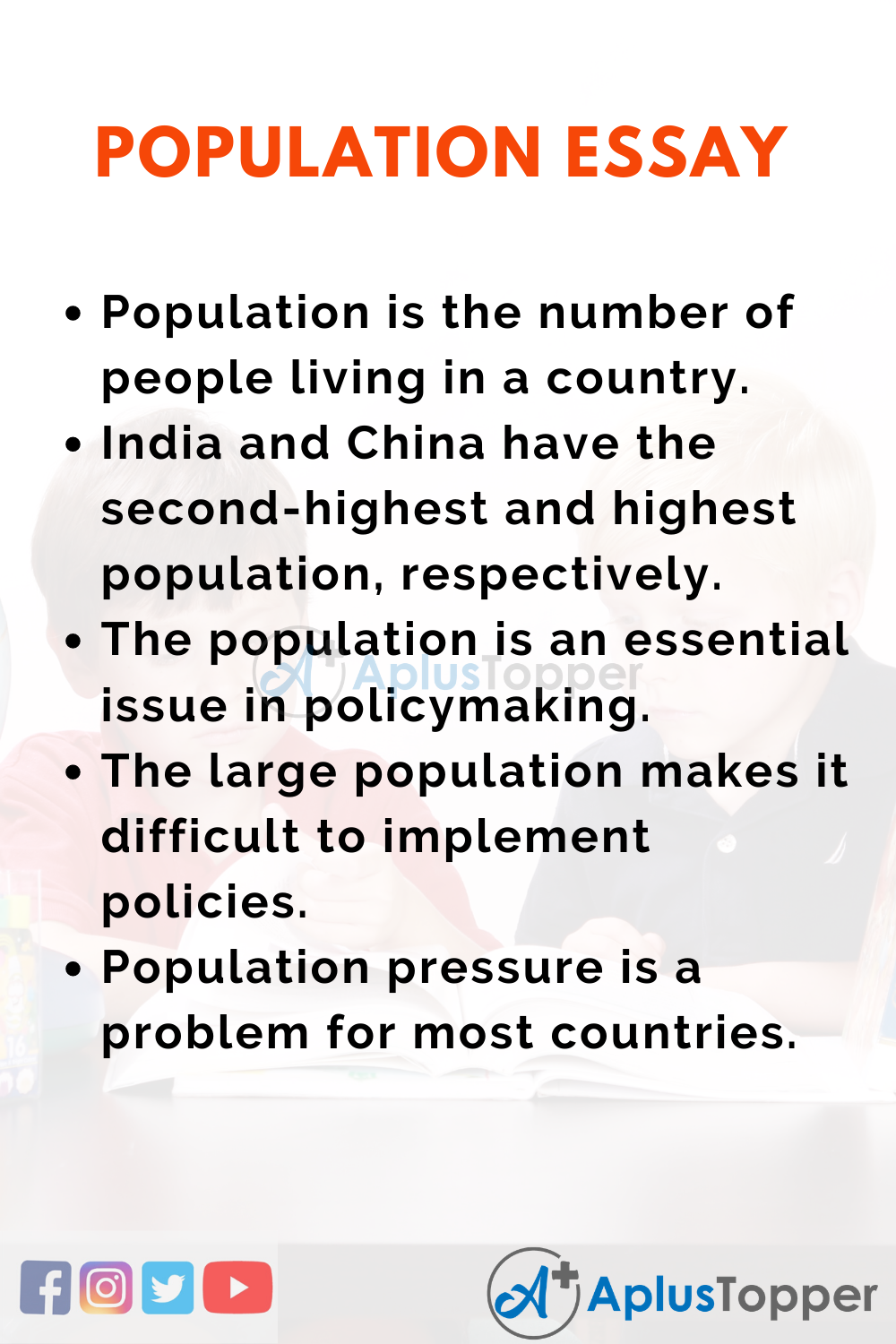 The population is the total number of people living in a country. India has the second-highest population across the entire world. The population is often a problem for both developing and developed nations. This is because of its increase over the years. Apart from a few nations, the people of almost all countries go on increasing every year. This causes an enormous population pressure on their society and economy. Poverty and the subsequent lack of education among the masses are often a reason for the increase in population. Another reason for the rise in population is the migration of people from different countries due to employment opportunities, education, and marriage. The population can be controlled in various ways. This includes sterilization, awareness campaigns, and birth control measures. 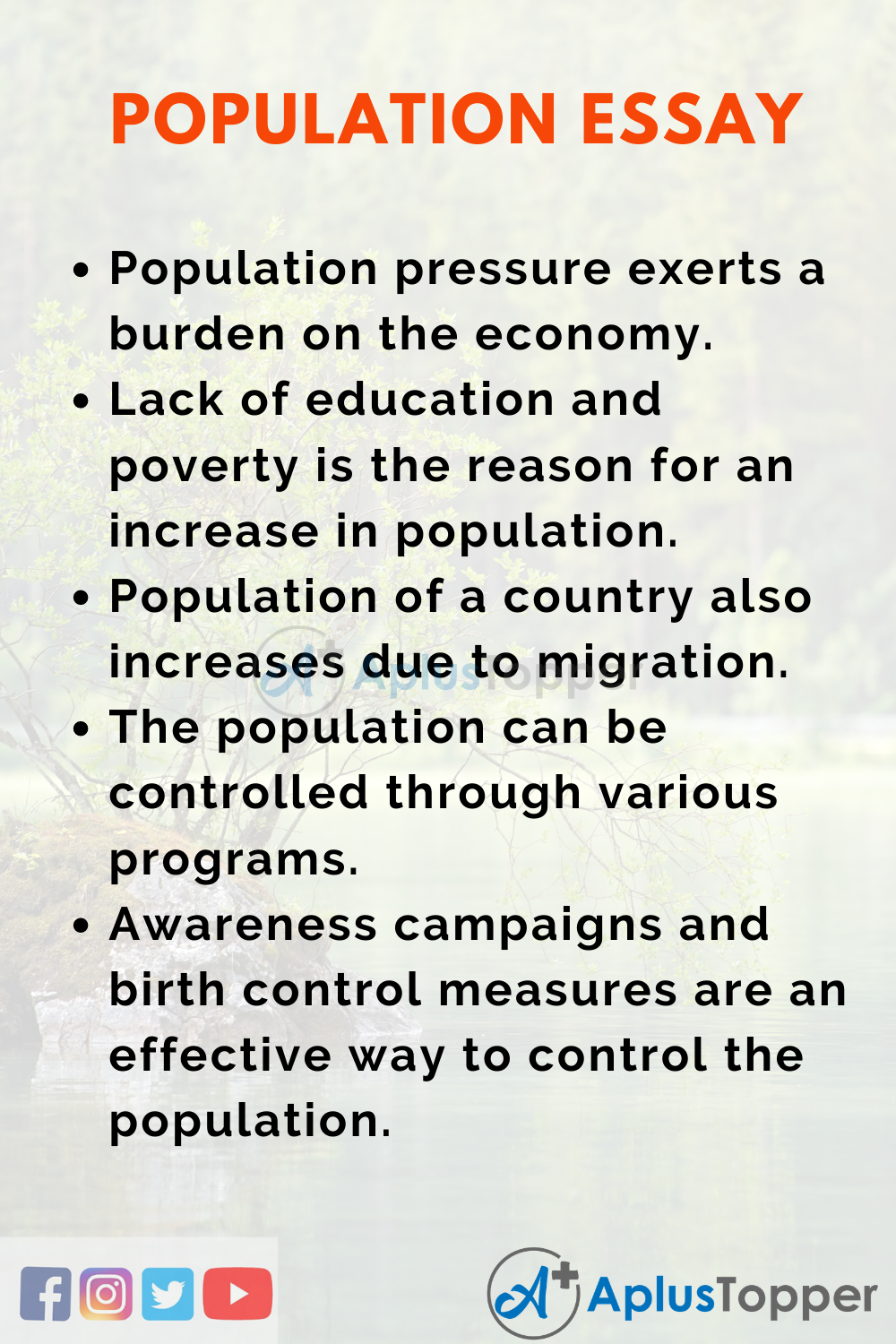 FAQ’s on Essay on Population

Question 1.
What are the effects of population pressure?

Answer:
Population pressure creates a burden on the economy and society, thereby decreasing the availability of resources in a country.

Question 2.
What are the varying reasons for migration in a developed country?

Answer:
Migration to a developed country happens mainly because of better opportunities in terms of income, employment education, although the situation is changing these days.

Question 3.
What are the ways of controlling the population of a country?

Question 4.
What are birth control measures adopted by developing countries?