Alternating Current
AC current is commonly used in homes and offices. The main reason for preferring ac voltage over dc voltage is that ac voltages can be easily converted from one voltage to the other and can be transmitted over long distances. In this chapterwe will deal the properties of ac and its flowthrough different devices (inductor, capacitor, etc).

Ac Voltage Applied To A Resistor

Consider a circuit containing a resistance ‘R’ connected to an alternating voltage.
Let the applied voltage be
V = Vo sinωt ______(1)
According to Ohm’s law, the current at any instant can be written as
I = \(\frac{V_{0} \sin \omega t}{R}\)
Where I0 = Vo/R is the peak value of current. Comparing eq(1) and eq(2), we can understand that the current and voltage are in same phase.
Graphical variation of current and voltage:

R.M.S value (or Virtual value, effective value) of current and voltage:
The mean value of emf and current for one cycle is zero. Hence to measure ac, the root mean square (rms) values are considered.

Power dissipated in the resistor:
The average power consumed in one complete cycle,

Substituting current and voltage, We get 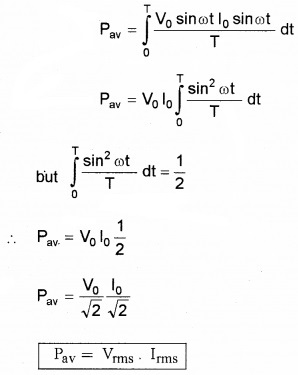 Representation Of Ac Current And Voltage By Rotating Vectors – Phasors
To represent the phase relation between current and voltage, phasors are used. Aphasoris a vector which rotates about the origin with an angular speed ω. The vertical components of phasors of V and I represent instantaneous value of V and I at a time t (see figure). The length of phasors give maximum amplitudes of V and I.

Figure (a) represent the voltage and current phasors and their relationship at time t1. Fig (b) shows the graphical variation of V and I.

Ac Voltage Applied To An Inductor

Consider a circuit containing an inductor of inductance ‘L’ connected to an alternating voltage.
Let the applied voltage be
V = Vo sinωt _____(1)
Due to the flow of alternating current through coil, an emf, \(\frac{d I}{d t}\) is produced in the coil. This induced emf is equal and opposite to the applied emf (in the case of ideal inductor) 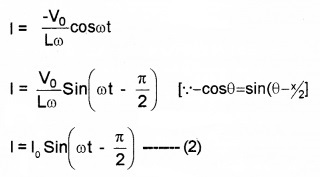 Where Io = \(\frac{V_{0}}{L \omega}\),
The term Lω is called inductive reactance. Comparing eq(1) and eq(2), we can understand that, the current lags behind the voltage by an angle 90°.
Graphical variation of current and voltage:

Power Consumed by an Inductor Carrying AC:
The instantaneous value of voltage and current in a pure inductor is
V = Vo sinωt
I = Io cosωt
The average power consumed per cycle. 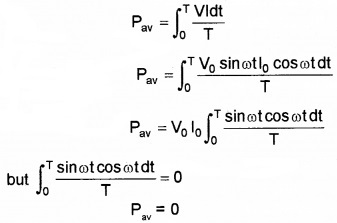 The above expression indicates that the average power or net energy consumed by an inductor carrying ac for a full cycle is zero.

Ac Voltage Applied To A Capacitor

Consider a circuit containing a capacitor of capacitance ‘C’ connected to alternating voltage.
Let the applied voltage be V = Vo sinωt _____(1)
The instantaneous current through capacitor 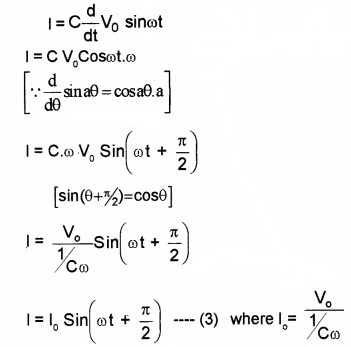 \(\frac{1}{\mathrm{C} \omega}\) is called capacitative reactance
Comparing eq(1) and eq(3), we can understand that, the current leads the voltage by an angle 90°
Graphical variation of current and voltage:

1. Power consumed by a capacitor carrying current:
The instantaneous value of voltage and current in a pure inductor is
V = Vo sinωt
I = Io cosωt
The average power consumed per cycle. 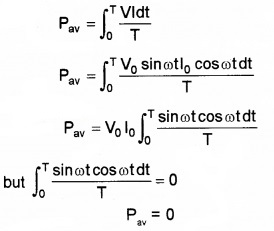 The above expression indicates that the average power or net energy consumed by a capacitor carrying ac for a full cycle is zero. 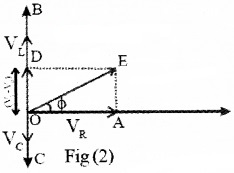 Similarly, let Vc be the voltage across C. This voltage is represented by a vector OC (since the voltage Vc lags the current by angle 90°).

The phase difference between VL and Vc is Φ(ie. they are in opposite directions). So the magnitude of net voltage across the reactance is (VL – Vc). This is represented by a vector OD in phasor diagram. 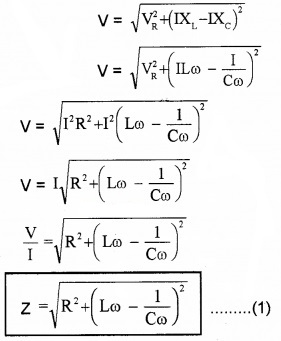 Where Z is called impedance of LCR circuit

Phase Difference: Let Φ be the phase difference between final voltage V and current I
From fig (2), we can write 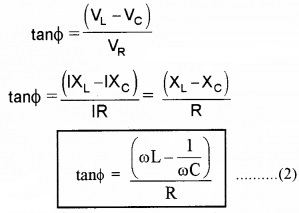 Expression for current:
The eq(2) shows that there is a phase difference between current and voltage. The instantaneous current lags the voltage by an angle (Φ).
If V = Vo sinωt is the applied voltage, the current at any instant can be written as
I = Io sin(ωt – Φ) _____(3)
Where Io is the peak value of current. It’s value can be written as

Substituting these values in eq.(1), we get 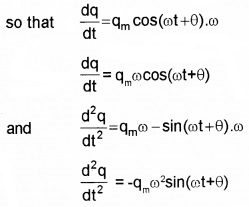 Substituting these values in eq.(2) we get 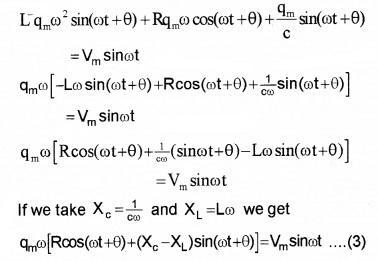 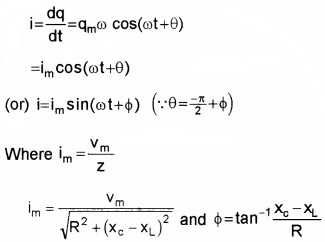 Thus, the analytical solution for the amplitude and phase of the current in the circuit agrees with that obtained by the technique of phasors. 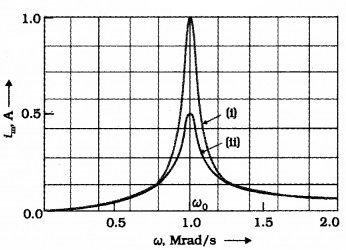 Variation of current through LCR circuit with angular frequency co for two cases (1) R= 100Ω and (2) R=200Ω, is shown in the graph
Note: It is important to note that resonance phenomenon is exhibited by a circuit only if both L and C are present in the circuit. Only then the voltages across L and C cancel each other (both being out of phase).

The current amplitude ( Vm/R) is the total source voltage appearing across R. This means that we cannot have resonance in a RL or RC circuit. 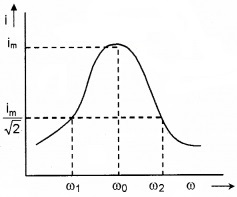 The figure shows the variation of current i with © in a LCR circuit.
Bandwidth: At ω0, the current in the LCR circuit is maximum. Suppose we choose a value of ω for which the current amplitude is \(\frac{1}{\sqrt{2}}\) times its maximum value.

Expression for bandwidth and sharpness of resonance:
We know that the current in the LCR circuit 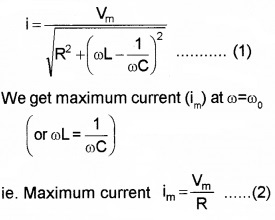 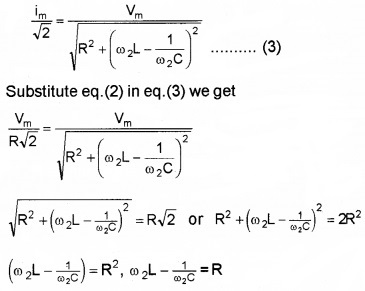 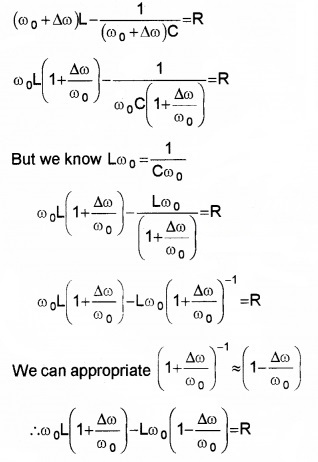 When bandwidth increases, the sharpness of resonance decreases, ie. the tuning of the circuit will not be good. 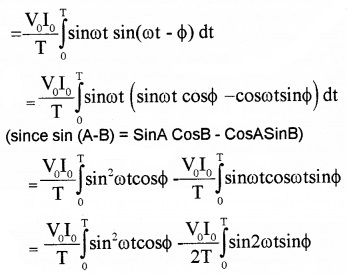 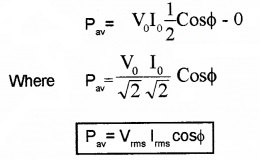 Case – 2 (In a purely inductive and purely capacitative circuit (no resistance)). In this case, the angle between voltage and current is 90°.
∴ Pav = Vrms IrmsCos 90
True power, Pav = 0
Which means that the power consumed by the circuit is zero. The current in such a circuit (purely inductive and purely capacitive) doesn’t do any work. A current that does not do any work is called wattles or idle current. 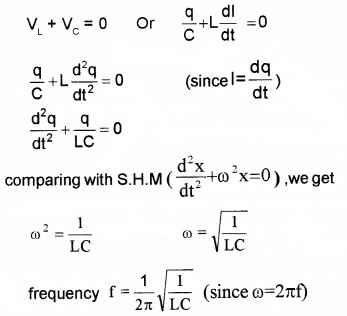 Transformers
Principle: It works on the principle of mutual induction.
Construction: 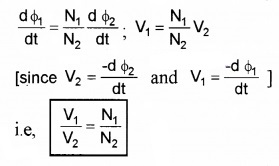 1. Power losses in a transformer
(i) Joule loss or Copper loss:
When current passes through a coil heat is produced. This energy loss is called Joule loss. It can be minimized by using thick wires.

(iii) Hysteresis loss: When the iron core undergoes cycles of magnetization, energy is lost. This loss is called hysteresis loss. This is minimized by using soft iron core.