Introduction
In this chapter we are going to discuss the laws governing electromagnetic induction; how energy can be stored in a coil, the generation of ac, the relation between voltage and current in various circuit components, and finally the working of the transformer.

The Experiments Of Faraday And Henry
Faraday and Henry conducted a series of experiments to develop principles of electromagnetic induction.
Experiment – 1 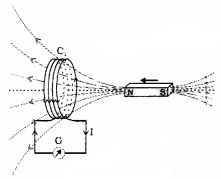 Connect a coil to a galvanometer G as shown in the figure. When the north pole of a bar magnet is pushed towards the coil, galvanometer shows deflection. The deflection indicates that a current is produced in the coil.

Conclusion of experiment 1:
The relative motion between magnet and coil produces an electric current in the first coil.
Experiment 2 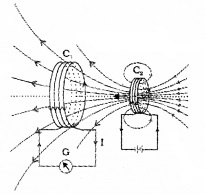 Connect a coil C1 to a galvanometer G. Take another coil C2 and connect it with a battery. A steady current in the coil produces a steady magnetic field. When the coil C2 is moved towards the coil C1, the galvanometer shows a deflection. This deflection indicates that the electric current is induced in the coil G. 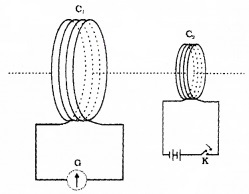 Conclusion of experiment – 3:
The change in current in second coil induces a current in the first coil. 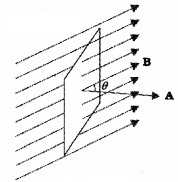 Faraday’S Law Of Induction
Faraday’s law of electromagnetic induction states that the magnitude of the induced emf in a circuit is equal to the time rate of change of magnetic flux through the circuit.
Mathematically, the induced emf is given by

If the coil contain N turns, the total induced emf is given by,

Lenz’S Law And Conservation Of Energy
Lenz’s law:
Lenz’s law states that the direction emf (or current) is such that it opposes the change in magnetic flux which produces it,
Mathematically the Lenz’s law can be written as

The negative sign represents the effect of Lenz’s law. The magnitude of the induced emf is given by Faraday’s law. But Lenz’s law gives the direction induced emf.
Lenz’s law is in accordance with the law of conservation of energy.

When the north pole of the magnet is moved towards the coil, the side of the coil facing north pole becomes north as shown in above figure. (Current is produced in the coil and flows in an anticlockwise direction).

So work has to be done to move a magnet against this repulsion. This work is converted into electrical energy. 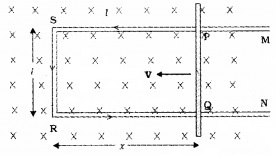 Consider a rectangular frame MSRN in which the conductor PQ is free to move as shown in figure. The straight conductor PQ is moved towards the left with a constant velocity v perpendicular to a uniform magnetic field B. PQRS forms a closed circuit enclosing an area that change as PQ moves. Let the length RQ = x and RS = I.
The magnetic flux Φ linked with loop PQRS will be BIx.
Since x is changing with time the rate of change of flux Φ will induce an e.m.f. given by

This current flows through the arm PQ. The arm PQ is placed in a magnetic field. Hence force acting on the arm,

If this arm is pulling with a constant velocity v, the power required for motion P = Fv

From eq. (3) and (4), we can understand that the workdone to pull the conductor is converted into heat energy in conductor.
Relation between induced charge and magnetic flux:
We know

so the above equation can be written as 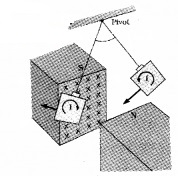 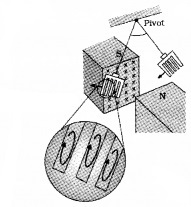 Make rectangular slots on the copper plate. These slots will reduce area of plate. Allow this copper plate to oscillate in between magnets. Due to this decrease in area, the eddy current is also decreased. Hence the plate swings more freely.

2. Electromagnetic damping:
Certain galvanometers have a core of metallic material. When the coil oscillates, the eddy currents are generated in the core. This eddy current opposes the motion and brings the coil to rest quickly.

3. Induction furnace:
Induction furnace can be used to melt metals. A high frequency alternating current is passed through a coil. The metal to be melted is placed in side the coil. The eddy currents generated in the metals produce heat, that melt it.

Inductance
An electric current can be induced in a coil by two methods:

1. Mutual inductance:
Mutual induction:
The phenomenon of production of an opposing e.m.f. in a circuit due to the change in current or magnetic flux linked with a neighboring circuit is called mutual induction.
Explanation

(i) Mutual inductance of two coils:
Expression for mutual inductance:
Consider a solenoid (air core) of cross-sectional area A and number of turns per unit length n. Another coil of total number of turns N is closely wound over the first coil. Let I be the current flow through the primary. Flux density of the first coil B= µ0nI
Flux linked with second coil, Φ = BAN
Φ = µ0nIAN _____(1)
But we know Φ = MI _______(2)
From eq(1) and eq(2), we get
∴ MI = µ0nIAN
M = µ0nAN
If the solenoid is covered over core of relative permeability µr
then M = µrµ0nAN

2. Self-inductance:
Self-induction
The phenomenon of production of an induced e.m.f in a circuit when the current through it changes is known as self-induction.
Explanation

Consider a coil connected to a battery and a key. When key is pressed, current is increased from zero to maximum value. This varying current produces a changing magnetic flux around the coil. The coil is situated in this changing flux, so that an e.m.f. is produced in the coil.

Similarly, when key is released, a back e.m.f is produced which opposes the decay of current in the circuit.

Thus both the growth and decay of currents in a circuit is opposed by the back e.m.f. This phenomenon is called self – induction.

Mathematical expression for self-inductance:
Consider a solenoid (air core) of length /, number of turns N and area cross-section A. let ‘n’ be the no. of turns per unit length (n = N/l)
The magnetic flux linked with the solenoid,
Φ = BAN
Φ = µ0nIAN (since B = µ0nI)
but Φ = LI
∴ LI = µ0nIAN
L = µ0nAN
If solenoid contains a core of relative permeability µr the L = µ0µrnAN.

4. Energy stored in an inductor:
When the current in the coil is switched on, a back emf (ε = -Ldt/dt) is produced. This back emf opposes the growth of current. Hence work should be done, against this e.m.f.
Let the current at any instant be ‘I’ and induced emf
E = \(\frac{-\mathrm{d} \phi}{\mathrm{dt}}\)
i.e., work done, dw= EIdt 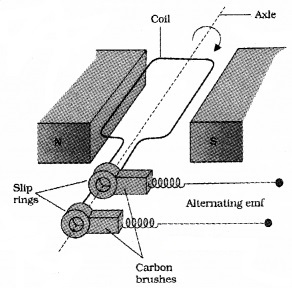 The structure of an ac generator is shown in the above figure. It consists of a coil. This coil is known as armature coil. This coil is placed in between magnets. As the coil rotates, the magnetic flux through the coil changes. Hence an e.m.f. is induced in the coil. 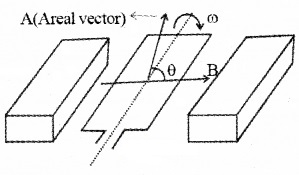 Take the area of coil as A and magnetic field produced by the magnet as B. Let the coil be rotating about an axis with an angular velocity ω.

Let θ be the angle made by the areal vector with the magnetic field B. The magnetic flux linked with the coil can be written as

Expression for current:
When this emf is applied to an external circuit .alternating current is produced. The current at any instant is given by
I = \(\frac{V}{R}\)

(V = ε0 sin ω)
I = I0 sin ωt
Where I0 = ε0/R, it gives maximum value of current. The direction of current is changed periodically and hence the current is called alternating current.

Variation of AC voltage with time: 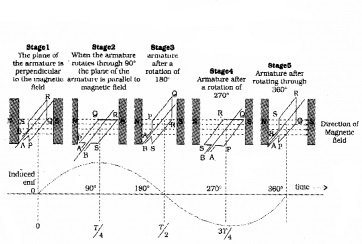