Introduction
The word magnet is derived from the name of an island in Greece called magnesia where magnetic ore deposits were found.
Properties of a magnet

Note: The earth behaves as a magnet with the magnetic field pointing approximately from the geographic south to the north.

The Bar Magnet
A magnet has two poles. One pole is North pole and the other South pole.
Magnetic poles:
These two points near the ends of a magnet at which the power of attraction of the magnet is mostly concentrated are called its magnetic poles.
Note: A current carrying solenoid behaves like a bar magnet. 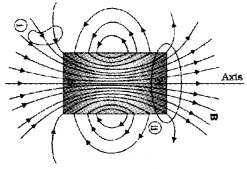 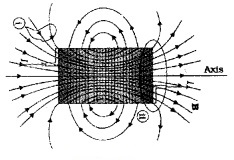 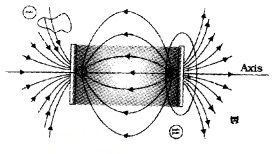 2. Bar magnet as an equivalent solenoid:
Magnetic field along the axis of a solenoid or bar magnet 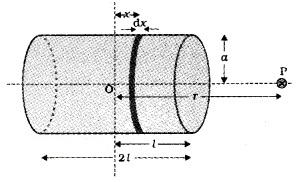 where ndx = N
(total number of turns in a circular element of thickness dx.)
Integrating from x = – l to x = + l, we get 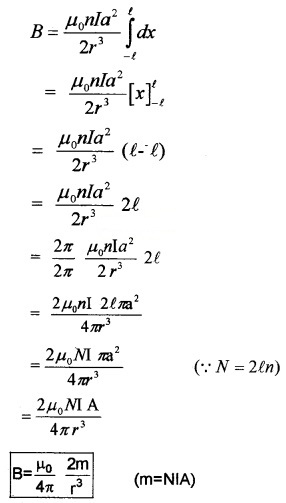 Where m is called magnetic moment of the solenoid.

3. The dipole in a uniform magnetic field:
Torque acting on a magnetic dipole:
Consider a magnetic dipole of dipole moment ‘m’ placed in a uniform magnetic field B. If this dipole is rotated to an angle θ, a restoring torque will act on the needle. ie τ = -mBSinθ.
But we know rotational torque τ = la, where I is the moment of inertia of the magnetic dipole and α is the angular acceleration,
lα = -mBSinθ
(Restoring torque and rotational torque are equal in magnitude but opposite in direction)
But α = \(\frac{d^{2} \theta}{d t^{2}}\), for small rotations sinθ ≈ θ.

This equation represents that, the oscillation of this magnetic needle is simple harmonic. When we compare the above equation with standard harmonic. 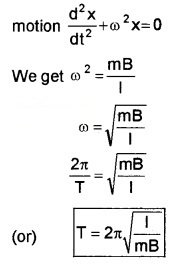 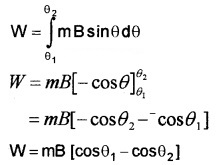 This work done is stored as magnetic potential energy, ie. 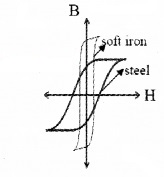 Substances that retain their ferromagnetic property at room temperature for a long time, even after the magnetizing field has been removed are called permanent magnets.

Electromagnets are usually ferromagnetic materials with low retentivity, low coercivity and high permeability. The hysteresis curve should be narrow so that the energy liberated as heat is small.
The hysteresis curves of both these materials are shown in the above figure. 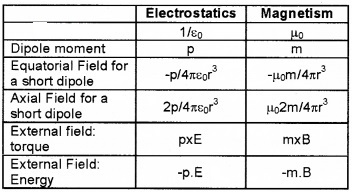 Magnetism And Gauss’s Law
Gauss’s law in magnetism: The net magnetic flux through any closed surface is zero. 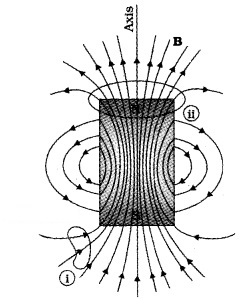 Consider Gaussian surfaces represented by I and II. Both cases demonstrates that the number of magnetic field lines leaving the surface is balanced by the number of lines entering it. This is true for any closed surface.

The Earth’s Magnetism
Earth’s magnetic field rise due to electrical currents produced by motion of metallic fluids in the outer core of the earth. This is known as the dynamo effect. 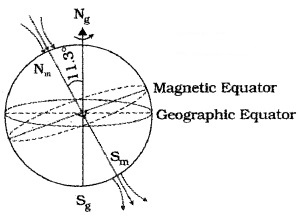 Declination at a place is the angle between the geographic meridian and magnetic meridian at that place. 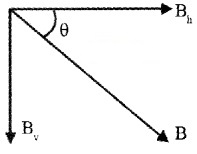 1. Intensity of magnetisation (M):
It is defined as the magnetic moment per unit volume. It is the measure of the extent to which a specimen is magnetized.

4. Magnetic permeability (µ):
It is the ratio of magnetic field inside a specimen to the magnetising field.
ie. µ = \(\frac{B}{H}\)
µ = µ0µr
µ0 – Permeability of free space
µr – Relative permeability of a medium. 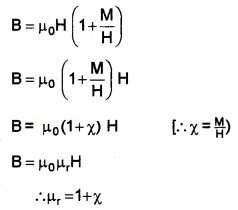 Magnetic Properties Of Materials
Materials can be classified as diamagnetic, paramagnetic or ferromagnetic in terms of the susceptibility χ. A material is diamagnetic if χ is negative, para-if χ is positive and small, and Ferro-if χ is large and positive.

Figure shows a bar of diamagnetic material placed in an external magnetic field. The field lines are repelled and the field inside the material is reduced.

Thus, the substance develops a net magnetic moment in direction opposite to that of the applied field and hence it repels external magnetic field.

2. Paramagnetism:
Paramagnetic substances are those which get weakly magnetized in an external magnetic field. They get weakly attracted to a magnet.

Reason for paramagnetism:
The atoms of a paramagnetic material possess a permanent magnetic dipole moment. But these magnetic moments are arranged in all directions.

Figure shows a bar of paramagnetic material placed in an external field. The field lines gets concentrated inside the material, and the field inside is increased.

Where C is a constant called curie’s constant. 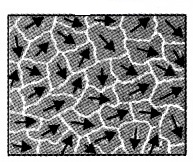 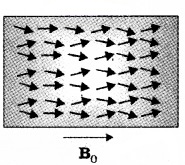 When we apply an external magnetic field B0, the domains arranged in the direction of B0 and grow in size. Thus, in a ferromagnetic material the field lines are highly concentrated.

Variation of B and H in paramagnetic materials:
Figure shows the plot of B versus H. As H is gradually increased from zero, B also increase from zero along OP.

As H increases, more and more magnetic dipoles get aligned in the direction of the field. So M increases and hence B increases.

When all the dipoles get aligned in the direction of the field, the curve becomes almost flat. After this there is no increase of B with H.

When H is gradually decreased from P1 there is no corresponding decrease in the magnetization. The shifting of domains in the ferromagnetic materials is not completely reversible and some magnetization remains even when H is reduced to zero.

The remaining part of curve is obtained by applying H in reverse direction. From these variations it is clear that B always lags behind H. This phenomenon is known as magnetic hysteresis (hysteresis means to lag behind).

The area enclosed by the hysteresis curve gives the loss of energy in the form of heat during the magnetisation – demagnetization cycle. 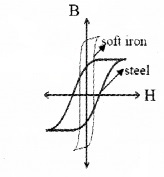 Substances which retain their ferromagnetic property at room temperature for a longtime, even after the magnetizing field has been removed are called permanent magnets.

Electromagnets are usually ferromagnetic materials with low retentivity, low coercivity and high permeability. The hysteresis curve should be narrow so that the energy liberated as heat is small.
The hysteresis curves of both these materials are shown in the above figure. 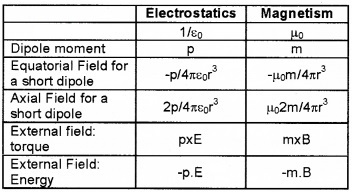