Introduction
The electric field strength is a vector quantity, while the electric potential is a scalar quantity. Both these quantities are interrelated.

where UA and UB are the potential energies at points A and B respectively.

A conservative field is one in which work done is independent of path.

Potential Due To A Point Charge

If this unit charge is moved (opposite to E) through a distance dx, the work done dw = – Edx
[-ve sign indicates that dx is opposite to E ]
So the potential at ‘P’ is given by 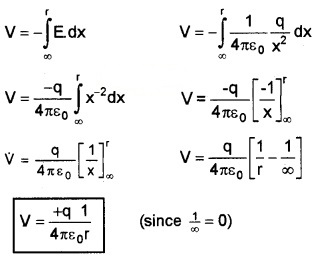 Potential due to an electric dipole 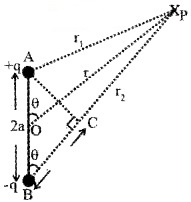 Consider dipole of length ‘2a’. Let P be a point at distance r1 from +q and r2 from -q. Let ‘r’ be the distance of P from the centre ‘O’ of the dipole. Let θ be angle between dipole and line OP. 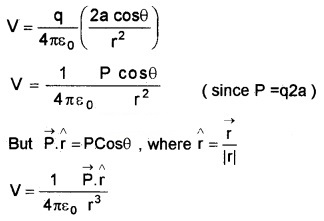 Case 2: If the point lies along the equatorial line of the dipole, then θ = 90°

Potential Due To A System Of Charges

Consider a system of charges q1, q2,……,qn with position vectors r1P, r2P……..,rnP relative to some origin. The potential V1 at P due to the charge q1 is

where r1P is the distance between q1 and P. Similarly, the potential V2 at P due to q2,

where r2P is the distances of P from charges q2. By the superposition principle, the potential V at P due to the total charge configuration is the algebraic sum of the potentials due to the individual charges
ie. V = V1 + V2 +……+ Vn

Equipotential Surface
The surface over which the electric potential is same is called an equipotential surface.
Properties: 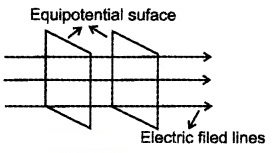 1. Relation Between Electric Field And Potential:

Consider two points A and B, separated by very small distance dx. Let the potential at A and B be V+ dV and V respectively. The electric field is directed from A to B.
If a unit +ve charge is moved through a distance ‘dx’ against this field, work done,
dw = -Edx _____ (1)
For unit charge dw = dv
∴ dv = – Edx
or

Electric field intensity at a point is the negative rate of change of potential with distance.

Potential Energy Of System Of Charges

1. Potential Energy of System of Two Charges:
The potential energy of a system of two charges is defined as the work done in assembling this system of charges at the given position from infinite separation.

Consider two charges q1 and q2 separated by distance r. Imagine q1 to be at A and q2 at infinity. Electric potential at B due to charge q1 is given by

The electric potential energy of this system is the sum of potential of each pair. Hence we can write
U = U12 + U23 + U13

Potential Energy In An External Field

where r12 is the distance between the charges According to the principle of superposition, the potential energy of the system of two charges in an electric field is
U = U1 + U2 + U12

3. Potential energy of a dipole in an external field:
Consider a dipole of dipole moment ‘P’ suspended in a uniform electric field of intensity ‘E’. Let θ be the angle between P and E.
Then we know torque τ = PE sinθ
Let the dipole be turned through an angle dθ
then work done dw = τdθ
= PE sinθ dθ
Total work done in rotating the dipole from θ1 to θ2

2. At the surface of a charged conductor, the electrostatic field must be normal to the surface at every point.

3. The interior of a conductor can have no excess charge in the static situation.

4. Electrostatic potential is constant throughout the volume of the conductor and has the same value (as inside) on its surface.

5. Electric field at the surface of a charged conductor
\(\bar{E}=\frac{\sigma}{\varepsilon_{0}} \hat{n}\)
where σ is the surface charge density and is a unit vector normal to the surface in the outward direction.

Dielectrics And Polarization
Dielectrics (insulator): Dielectrics are non-conducting substances. They have no charge carriers. The molecules of dielectrics may be classified into two classes. 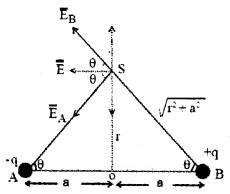 Consider a dipole of dipole moment P = 2aq. Let ‘S’ be a point on its equatorial line at a distance ‘r’ from its centre. The magnitudes of electric field at ‘S’ due to +q and -q are equal and acts as shown in figure. To find the resultant electric field resolve. 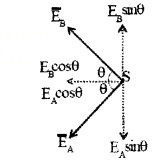 Their normal components cancel each otherwhere as their horizontal components add up to give the resultant field at ‘S’.
E = EAcos θ + EBcos θ = 2 EB cos θ 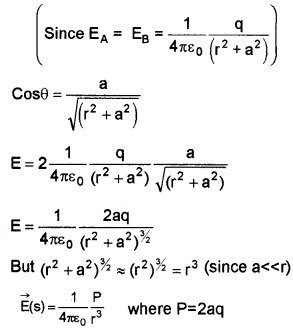 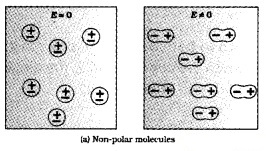 The permanent dipoles in a polar dielectric are arranged randomly. So total dipole moment is zero. But when we apply external electric field, the individual dipole tends to align in the direction of electricfield. The induced dipole moments of different molecules add up giving a net dipole moment. 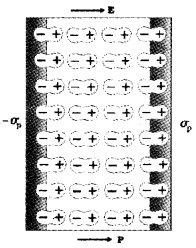 Consider a dielectric slab placed inside a uniform external electric field E0. This field produces a uniform polarization as shown in the figure. Any region inside the dielectric, the net charge is zero.

This is due to the cancellation of positive charge of one dipole with negative charge of adjacent dipole. But the positive ends of the dipole do not cancel at right surface and the negative ends at the left surface.

This surface charges (-σp and +σp) produce a field \(\left(\vec{E}_{i n}\right)\) opposite to the external field. Hence total electric field is reduced inside the dielectric field which is shown in the figure below.
ie; E0 + Ein ≠ 0

How does a metal modify the external electric field applied on it?

Capacitors And Capacitance
Capacitor: Capacitor is a system of two conductors separated by an insulator for storing electric charges.
Capacitance of a capacitor:

The Parallel Plate Capacitor
Electric field due to a capacitor: 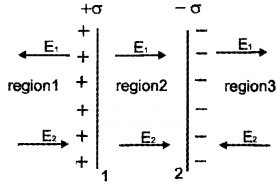 Consider a parallel plate capacitor consists of two large conducting plates 1 and 2 separated by a small distance d. Let +σ and -σ be the surface charge densities of first and second plates respectively. (Here, we take, electric field towards right is taken as positive and left as negative.)
Region I: This region lies above plate 1.
E = E+ + E– ie.

E = 0
Electric field in between two plates: In the inner region between plates 1 and 2, the electric field due to two charged plates add up.

(a) Expression for capacitance of a capacitor: Potential difference between two plates
V= Ed 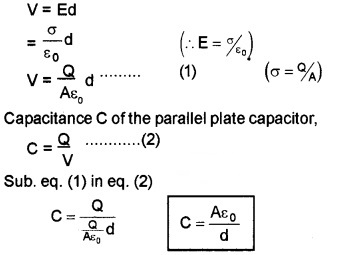 Effect Of Dielectric On Capacitance 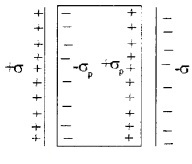 The product ε0 K is the permittivity of the medium.

Combination Of Capacitors
1. Capacitors in series: Let three capacitors C1, C2 and C3 be connected in series to p.d of V. Let V1, V2 and V3 be the voltage across C1, C2, and C3.

Substituting these values in (1),

If these capacitors are replaced by a equivalent capacitance ‘C’, then
V = \(\frac{q}{C}\)
Hence eq(2) can be written as 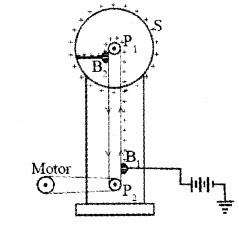 The vande Graff generator consists of a large spherical metal shell, placed on an insulating stand. Let p1 and p2 be two pulleys. Pulley p1 is at the center of the spherical shell S. A belt is wound around two pulleys p1 and p2. This belt is rotated by a motor. Positive charges are sprayed by belt. Brush B2 transfer these charges to the spherical shell. This process is continued. Hence a very high voltage is produced on the sphere.
Why does the charge flow from inner sphere to outer sphere? 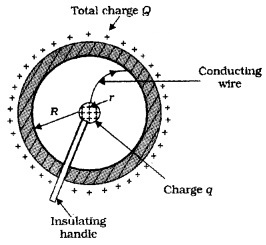