Introduction
The discovery of cathode rays by Rontgen and discovery of electrons by JJ Thomson were important milestones in the study of atomic structure.

Work function:
When we give energy to electron in a metal, it can come out of metal. This minimum energy required by an electron to escape from the metal surface is called the work function of the metal. It is generally denoted by Φ0(hν0) and measured in eV (electron volt).

Electron volt:
One electron volt is the energy gained by an electron when it has been accelerated by a potential difference of 1 volt
1 eV = 1.602 × 10-19J.
This unit of energy is commonly used in atomic and nuclear physics.

(i) Thermionic emission:
Electrons can come out of metal surface, if heat energy is given to metal.

(ii) Field emission:
By applying a very strong electric field (of the order of 108 Vm-1) to a metal, electrons can be pulled out of the metal.

2. Hallwachs’ and Lenard’s observations:
Wilhelm Hallwachs and Philipp Lenard investigated the phenomenon of photoelectric emission in detail. The experimental set up consist of two metal plates (cathode and anode) inside a evacuated glass tube as shown in figure.

They observed that current flpws in the circuit when emitter plate (C) was illuminated by UV radiation. It means that when light incident on a metal plate electrons are emitted. These electrons move towards the anode and results in current flow. 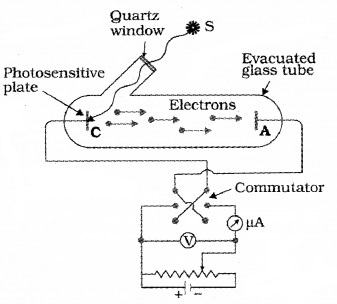 From these observations they concluded that the particles emitted carry negative charge. 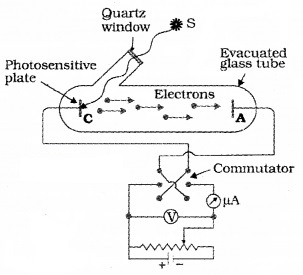 The experimental arrangement consists of two zinc plates enclosed in a quartz bulb. The plates are connected to a battery through a micro ammeter. When ultraviolet light is incident on the cathode plate, the micrometer indicates a current in the circuit.

When the anode is made negative (with respect to cathode) the current decreases and at a certain voltage (V0), current is completely stopped. This voltage V0 is called stopping potential. At this stage,
\(\frac{1}{2}\) mVmax2 = eV0
where vmax is the maximum kinetic energy of photo electrons.

1. Effect of intensity of light on photocurrent Experiment:
In this experiment the collector A is maintained at a positive potential. The frequency of the incident radiation and the accelerating potential are kept at fixed.

Observations:
This graph shows that photocurrent increases linearly with intensity of incident light. 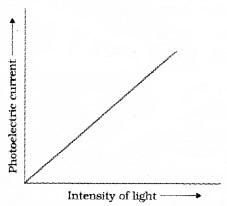 2. Effect of potential on photoelectric current Experiment:
Keep the plate A at positive accelerating potential. Then illuminate the plate C with light (of fixed frequency v and fixed intensity I1). Then vary the positive potential of plate A gradually and measure the resulting photocurrent each time.

When the photo current reaches maximum, the polarity of plates are reversed and thus apply a negative potential (retarding potential) to plate A.

Again photocurrent is measured by varying the retarding potential till photocurrent reaches zero. The experiment is repeated for higher intensity I2 and I3 keeping the frequency fixed.

The graph of anode potential with photo current: 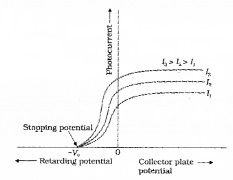 Note:
a. The maximum value of photo current is called saturation current (Isat).

b. The retarding anode potential at which photo current reaches zero is called stopping potential (V0).

3. Effect of frequency of incident radiation on stopping potential:
Experiment:
In this experiment, we adjust the intensity of light at various frequencies (say ν1, ν2 and ν3 such that ν1 < ν2 < ν3) and study the variation of photocurrent with collector plate potential. 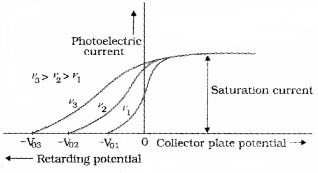 The graph of stopping potential with frequency: 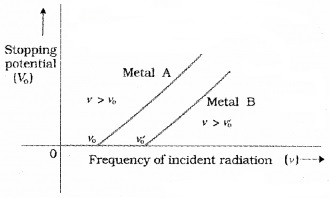 The graph shows that

These observations have two implications:

Summary of the experimental features and observations:
Laws of photoelectric emission:

2. According to wave theory, absorption of energy by electron takes place continuously. A large number of electrons absorb energy from the wave at a time.

Hence energy received by a single electron will be small. Hence it takes hours to eject an electron from a metal surface. This delay in photoemission is against the experimental observation.

Einstein’s Photoelectric Equation
Energy quantum of radiation:
Einstein explained photoelectric effect based on quantum theory. According to quantum theory, light contain photons having energy hν, when a photon of energy hr incidents on a metal surface, electrons are liberated.

A small portion of the photon energy is used for work function (Φ) and remaining energy is appeared as K.E of the electron.

4. According to quantum theory, a photon interacts only with a single electron (no sharing of energy takes place) so that there is no time delay in photoelectric emission.

Particle Nature Of Light: The Photon:
The photon picture of electromagnetic radiation is as follows:

The wave length of electron wave:
If electron of mass ‘m’ and charge ‘e’ is accelerated through a p.d of V volt, the de-Broglie wavelength can be written as

2. Uncertainty Principle:
According to the principle, it is not possible to measure both the position and momentum of an electron (or any other particle) at the same time exactly.

The above equation allows the possibility that if ∆x is zero; then ∆p must be infinite in order that the product is nonzero. Similarly, if ∆p is zero, ∆x must be infinite.

The wave packet description of an electron:

The above wavepacket description of matter wave corresponds to a definite momentum of an electron extends all over space. In this case, ∆p = 0 and
∆x → ∞

Aim: To confirm the wave nature of electron.
Experimental setup:
The Davisson and Germer Experiment consists of filament ‘F’, which is connected to a low tension battery. The Anode Plate (A) is used to accelerate the beam of electrons. A high voltage is applied in between A and C. ’N’ is a nickel crystal. D is an electron detector. It can be rotated on a circular scale. Detector produces current according to the intensity of incident beam.

The nickel crystal scatters the electron beam to different angles. The crystal is fixed at an angle of Φ = 50° to the incident beam.

The graph shows that the detector current increases with accelerating voltage and attains maximum value at 54V and then decreases. The maximum value of current at 54 V is due to the constructive interference of scattered waves from nickel crystal (from different planes of crystal). Thus wave nature of electron is established.

Discussion:
The experimentally measured wavelength is found in agreement with de-Broglie wavelength. Thus wave nature of electron is confirmed.