Question 1.
Write the expression for intensity of electric field near to the surface of a charged conductor with uniform charge density σ.
Answer:
E = \(\frac{\sigma}{\varepsilon_{0}}\)

Question 10.
The curves shown in figure are drawn for different magnetic materials. Among the three curves, name the curve that,

Question 11.
A capacitor C, a variable resistance R and a bulb B are connected in series to a.c. mains in the circuit as shown. The bulb glows with some brightness. How the glow of the bulb change if.

Question 13.
An object AB is kept in front of a concave mirror as shown in figure. 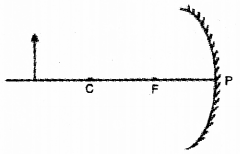 a) Complete the ray diagram showing the image formation of object.
b) How will the position and intensity of image be affected if the lower half of the mirror’s reflecting surface is painted black?
Answer:
a) 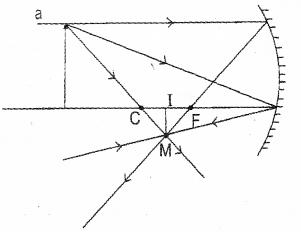 b) The position of image does not charge. But the intensity decreases.

Question 14.
Assuming that the two diodes D1 and D2 used in the electric circuit as shown in figure are ideal. Find out the value of current flowing through 2.5Ω resistor. 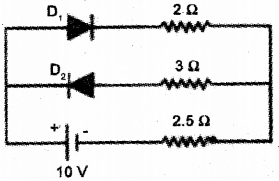 Question 15.
a) Mention the function of the following used in the communication system
(i) Transducer
(ii) Transmitter
b) Figure shows the block diagram of a AM transmitter. Identify the boxes X and Y.

Answer:
a) i) Transducer: The device that converts one form of energy into another is called tranducer.
ii) Transmitter – Atransmittertransmits the information

Question 16.
Three capacitors of capacitances 2µF, 3µF and 4µF are connected in series.
a) Find the equivalent capacitance of the combination
b) The plates of a parallel plate capacitor have an area 20 cm2 each are separated by a distance of 2.5 mm. The capacitor is charged by connecting it to a 400V supply. How much electrostatic energy is stored in the capacitor?
Answer:
a) C1 = 2μF = 2 × 10-6F
C2 = 3μF = 3 × 10-6F

Question 17.
A circuit using potentiometer and a battery of negligible internal resistance is set up as shown to develop a constant potential gradient along the wire PQ. Two cells of e.m.fs E1 and E2 are connected in sereis as in figure in combination 1 and 2. The balance points are obtained respectively at 400 cm and 240 cm from point P. Find

Question 18.
A conducting rod PQ of length ‘l’ connected to a resistance ‘R’ is moved at a uniform speed ‘V’, normal to a uniform magnetic field ‘B’. 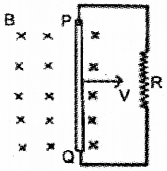 a) Deduce the expresssion for e.m.f induced in the conductor.
b) Find the magnitude and direction of current through the conductor.
Answer:
a) flux, Φ = BA
Here, Area A = ldx
dx is small displacement rod in time Δ T
Φ = B × l × dx 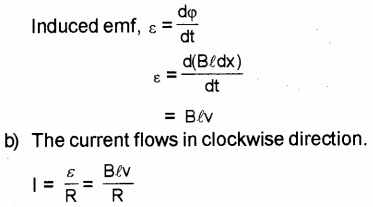 Question 20.
The focal length of a lens has dependence on its radii of curvatures and refractive index. Derive Lens maker’s formula.

Question 21.
a) Write the expression for the de Broglie wavelength associated with a charged particle having charge ‘q’ and mass ‘m’, when it is accelerated by a protential of ‘V’ volts.
b) A proton and an electron have same kinetic energy. Which one has greater value of de Broglie wavelength and why?
Answer: 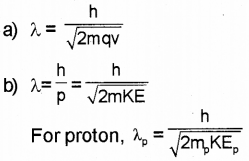 Question 23.
Gauss’s theorem is useful for finding the intensity of elelctric field.
a) Write the Gauss’s law in its mathematical form
b) Using the law, prove that intensity of electric field at a point due to a uniformly charged infinite plane sheet is independent of the distance from it.
Answer:
\(\phi=\oint \overrightarrow{\mathrm{E}} \cdot \mathrm{d} \overrightarrow{\mathrm{s}}=\frac{\mathrm{q}}{\varepsilon_{0}}\) 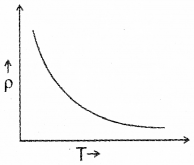 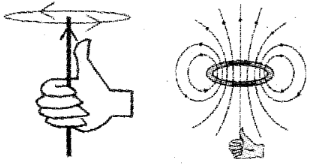 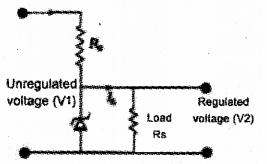 a) Identify the diode in the circuit and write the use of the resistance Rs.
b) Explain how the diode helps as to stabilize the output voltage of the circuit.
c) Name the type of biasing used in this diode
Answer:
a) Zenerdiode, Voltage regulator
b) Solar Cell: Solar cell is junction diode used to convert solar energy into electrical energy.

Question 27.
In the figure, PQ is the incident ray on the equilateral glass prism ABC. 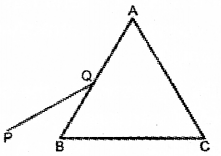 a) Complete the ray diagram showing the passage of light and mark the angle of deviation.
b) Derive an expression for the refractive index of the material of the prism.
Answer: 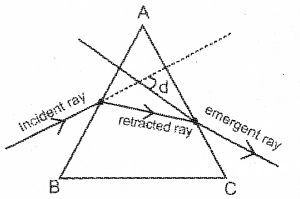 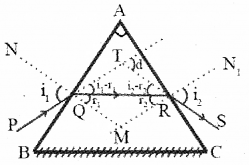 ABC is a section of a prism. AB and AC are the refracting faces, BC is the base of the prism. ∠A is the angle of prism.

A ray PQ incidents on the face AB at an angle i1. QR is the refracted ray inside the prism, which makes two angles r1 and r2 (inside the prism). RS is the emergent ray at angle ‘i2’ 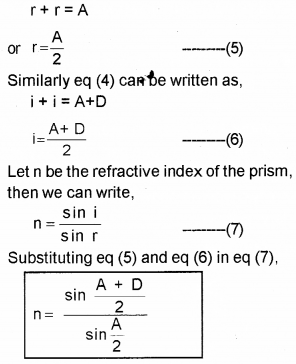 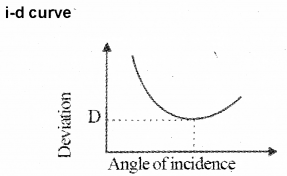 Question 28.
According to Christian Huygens wave theory, light emanating from a source as wave fronts.
a) What is the shape of wave front emerging form a linear source?
b) Derive the mathematical expression for the bandwidth of interference bands obtained in young’s double slit experiment with the help of suitable diagram.
Answer:
a) Cylinder
b) 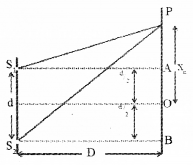 S1 and S2 are two coherent sources having wave length A. Let ‘d’ be the distance between two coherent sources. A screen is placed at a distance D from sources. ‘O’ is a point on the screen equidistant from S1 and S2.
Hence the path difference, S1O – S2O = 0
So at ‘O’ maximum brightness is obtained.
Let ‘P’ be the position of nm bright band at a distance xn from O. Draw S1A and S2B as shown in figure.
From the right angle ΔS1AP 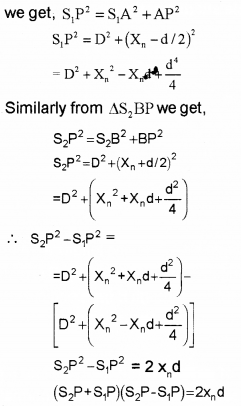 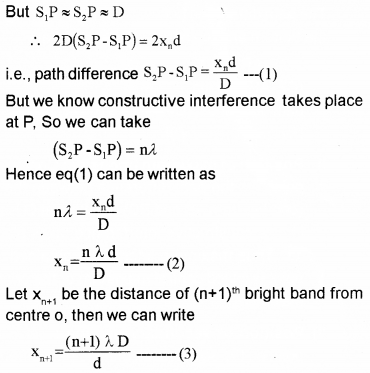 Question 29.
a) The radius of nth stationary orbit of hydrogen atom is:
rn = \(\frac{\mathrm{n}^{2} \mathrm{~h}^{2} \varepsilon_{0}}{\pi \mathrm{me}^{2}}\)
Using Bohr postulates, obtain an expression for the energy of electron in the stationary states of H-atom.
b) Draw the energy level diagram showing how the spectrallines corresponding to Balmerseries occur due to transition between the energy levels.
Answer:
a) Consider hydrogen atom which has one electron revolving around nucleus having one proton. The centripetal force for electron is provided by electrostatic force between electron and proton 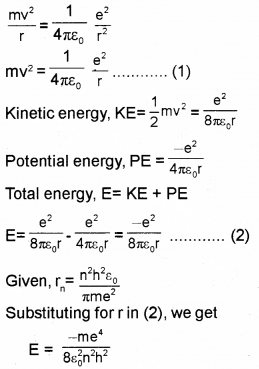 Note: An electron can have any total energy above E=0ev. In such situations electron is free. Thus there is a continuum of energy states above E = 0ev.