Question 2.
There are different types of leucoplasts in plant cells. Name the leucoplast that store proteins.
Answer:
Aleuroplast

Question 3.
Observe the relationship between the first two terms and fill in the blank.
Epipetalous Stamen – Brinjal
…………. – Lily
Answer:
Epiphyllous

Question 6.
Complete the flowchart given below 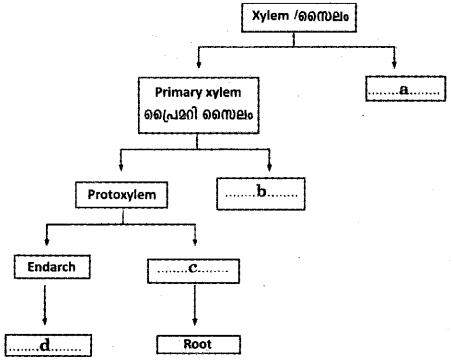 Question 7.
Ribosomes are organelles without a membrane found in all cells. Name another organelle devoid of membrane, seen in animal cells, Write its function.
Answer:
Centriole or centrosome
Function: 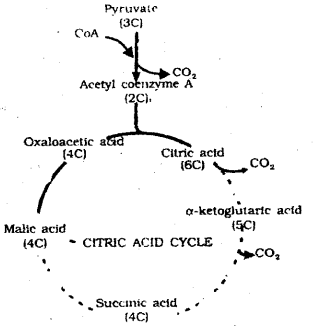 Question 10.
The given figure shows a plant belonging to liverworts. Identify the plant. Name the asexual buds seen on it and write their features. 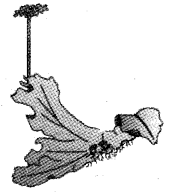 Question 12.
Write a note on the phenomenon plasticity exhibited by plants with an example.
Answer:
Plasticity-the structural change in plant in response to different environmental condition.
Heterophylly is an example for plasticity, eg. production of two types of leaves in coriander cotton and larkspur

Question 14.
The tissue found between the upper and lower epidermis of a leaf is called mesophyll.
a) Write the type of cells found in this tissue in a dicot leaf.
b) Mention two differences between a dicot leaf and monocot leaf.
Answer:
a) Palisade and spongy parenchyma
b) 1. In Dicot leaf more stomata are distributed on lower surface while monocot stomata are equally distributed on both surfaces
2. In monocot leaf bulliform cells are present while in Dicot leaf bulliform cells are absent

Question 15.
Photosynthesis is a process influenced by environmental factors as well as plant factors. Mention three factors under each category.
Answer:

Question 16.
First phase of meiosis 1 is typically longer and complex one. Name it. Mention the five subdivisions of this phase.
Answer:
Prophase 1

Question 17.
Plant growth regulators can be employed for various agricultural and horticultural practices. Identify the growth regulators that can be used for the following purposes.
a) To have weedfree lawns
b) To increase sugarcane length
c) Fruit set in pineapples
d) Rooting in stem cuttings
e) Inhibiting seed germination
f) To promote female flowers in cucumber
Answer:
a) 2,4-D (Auxin)
b) gibberellin
c) ethylene
d) auxin
e) ABA
f) ethylene

Question 18.
Certain stages in cell cycle are given below.
Karyokinesis, Prophase, Cytokinesis, Metaphase, Anaphase, Telophase.
Choose the statements (from those given below) that match with these stages and prepare a table.