Question 1.
Who among the following scientists is related to the identification of cytokinins?
a. E. Kurosawa
b. F. Skoog
c. C.Darwin
d. F. W. Went

Question 2.
Read the following statements and select the correct statements from the given choices.
i. Methanogens are present in the guts of ruminant animals
ii. Mycoplasma has a distinct cell wall.
iii. Viroids are infectious naked DNA molecules.
iv. Algal component of lichen is phycobiont.
a. ii and iii
b. i and iv
c. i and iii
d. ii and iv.

Question 3.
Algae are useful to man in a variety of ways.
Suggest any four uses of algae.

Question 7.
Define Blackman’s law of limiting factors and identify any two important factors which influence the rate of photosynthesis in plants.

Question 8.
The movement of water through the root layers is ultimately symplastic in the endodermis. Give a reason.

Question 9.
a. The arrangement of flowers on the floral axis is called ……
i. Aestivation
ii. Phyllotaxy
iii. Placentation
iv. Inflorescence
b. How can you differentiate an actinomorphic flower from a zygomorphic flower?

Question 10.
a. The tissues involves in the secondary growth of dicot plants are vascular cambium and …….
b. Compare the formation of vascular cambia in the dicot stem and dicot root.

Question 12.
Given below is the metaphase of mitosis. Analyze the diagram and draw a sketch of anaphase. Write any two events of anaphase. 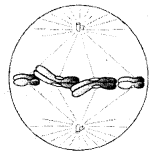 Question 13.
Glycolysis is the partial oxidation of glucose to produce two molecules of pyruvic acid.
a. Where does glycolysis occur?
b. Steps of glycolysis are given below. Fill up the blank boxes. 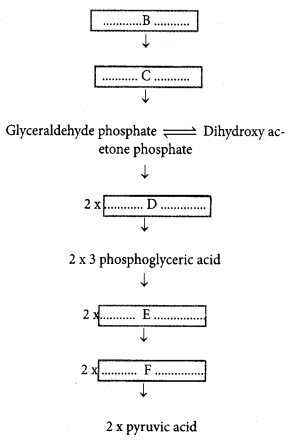 OR
The complete oxidation of pyruvic acid yields three molecules of CO2 by a cyclic process in the matrix of mitochondria.
a. Who first develop this cycle?
b. Draw a diagrammatic sketch of the identified cycle.