Paragraph on the Environment: The environment is the ecosystem of nature in which all living organisms survive together. They are dependent on each other for survival. When one creature is disturbed, the whole cycle gets eroded. This ecosystem comprises creatures such as human beings, plants, and animals. They are all living things. Non-living things such as rocks and minerals also play a crucial role in the functioning of the environment.

The environment is the circumstance in which all-natural resources of earth adapt to live. Humans, animals, trees, oceans, rocks are the natural resources of the earth and together create an environment. They are responsible to provide living conditions for an organism. The environment is categorized into physical and biological. The first category includes atmosphere (air), hydrosphere (water), and lithosphere (solid). The second category involves all living beings such as human beings. Both of these categories are required together for the survival of life on earth. There will be no chance of survival on earth in the absence of any of these categories. 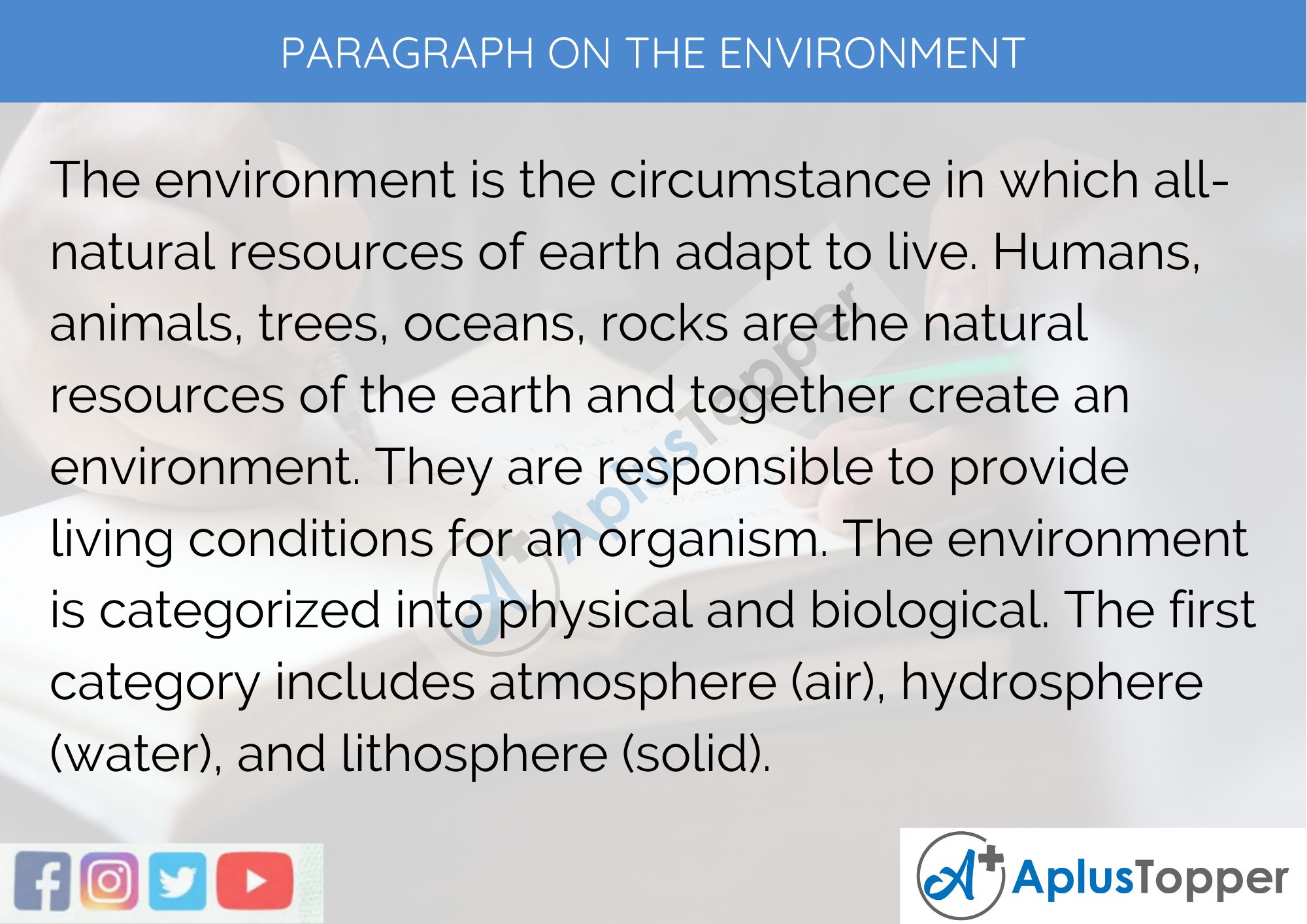 Paragraph on the Environment- 150 Words for Class 4, 5 Children

The surroundings in which life exists on earth are called the environment. The environment contains air, water, sunlight, trees, animals, and human beings. They are the living and non-living creatures of the earth. The trees, human- beings, and animals are living organisms. The sun, water, and air are non-living organisms that are crucial for man’s survival. Every creature is a natural resource for each other. For example, deer is a natural resource to be eaten by a lion. Life on the earth would not be able to exist in the absence of any one of these natural resources.
However, the environment has components of the atmosphere and hydrosphere that influence the life of living beings. Gases such as nitrogen and oxygen are present in the atmosphere. Hydrosphere covers all the water bodies every living being is created according to the features of these components. For example, aquatic animals are created to breathe underwater. Aerial animals are made to breathe in air.

Paragraph on the Environment 200 Words for Class 6, 7, 8 Students

The environment is the natural surroundings of the earth that enables an organism’s survival. The French word ‘environ’ that means to surround is a derivative of the word environment. It consists of living beings such as humans, plants, and animals. The air, water, and land are non-living entities. Their functioning is designed by nature in such a way that everything is dependent on each other. The human being is the most dominant creature of all the beings who can depend on all the natural resources of the earth. He requires the air to breathe. Not only humans but plants and animals also need air to breathe. There will be no life on earth without air. It is only the human being who is responsible for the destruction of the environment.

The earth consists of surroundings in which all living and non-living beings live their lives. The physical, biological, and natural forces of nature combine together and create circumstances that enable an organism to live. Such circumstances are called the environment. The French word ‘environ’ which means to surround is a derivative of the word environment.

All the biotic (living) and abiotic (non-living) entities constitute the environment. Biotic things include- humans, plants, animals, and insects. They are classified as biological components of the environment. Every biotic creature has its own fixed life cycle. For example, human-being is the strongest living organism on earth. He needs plants and animals in order to fulfill his needs. His life-cycle will be disorganized without them.

Whereas, abiotic components involve the atmosphere, lithosphere, hydrosphere, and biosphere. They are the layers of the environment. These layers are categorized as physical components of the environment. The atmosphere is the layer of air made up of nitrogen, oxygen, and other gases. All the water bodies such as rivers and oceans together make up the hydrosphere. The lithosphere is the solid, outermost part of the earth. It is made of crust that covers the mantle, rocks, and soil on the surface of the earth. The most important layer is the biosphere where life exists. It involves aquatic, terrestrial, and aerial ecosystems. From the root systems of trees to the deepest underwater life is what the biosphere features.

The existence of all these organisms is dependent on their constant interaction with each other. Their functioning is organized by nature and can be destroyed once being squandered. Today, the degradation of the environment has become a major issue to be tackled by human beings. Frs on the Environment

Question 1.
What natural resources are used by human beings?

Answer:
Humans are the major consumers of natural resources on earth. They obtain food products from animals and plants. Clothing is one of the basic necessities of a man. He again obtains clothes from the same mentioned resources.

Question 2.
How will human beings degrade the environment?

Answer:
The misuse of natural resources by human beings is the major cause of the degradation of the natural environment. The man’s need has wiped out more than half of the forests around the world. As a result, natural disasters like floods have become common today.

Question 3.
What is an ecosystem?

Answer:
An ecosystem is a large community in which some or all forms of life work together to make a living. There is a terrestrial ecosystem on earth. The trees, plants, shrubs large and small animals, insects live together and depend on each other. Forests are the natural habitat of animals. Rooting out animals from their natural home will be a major disaster to their ecosystem.

Question 4.
What is deforestation?

Answer:
The cutting off trees across the world for different uses like construction, agricultural lands, and urbanization. It is negatively affecting the natural environment.