Onam festival 2020 falls between the 22nd of August and 2nd September. It’s during the Malayalam month Chingam. It has been celebrated since the year 1960 and thus is of great importance to Malayalee people. We soonly update the Onam Festival Essay in Hindi and Malayalam.

We are providing students with essay samples on a long essay of 500 words and a short essay of 150 words on the topic Onam Festival for reference along with ten lines and FAQs.

Onam festival has been a part of South Indian culture for years now. People from Kerala mostly celebrate this ten days festival. It is celebrated between August and September. The festival revolves around the legend of the King Mahabali.

The king was a mythical ruler of Kerala, and his subjects were pleased with his reign. He was quite respected, and there was no discrimination in his kingdom. However, the gods were angered by his popularity and decided to send Lord Vishnu to Earth and take care of the problem.

Lord Vishnu, in the form of a brahmin man, went to Mahabali and asked him for three feet of land. Mahabali being the generous ruler he is, granted his wish. Lord Vishnu then turned himself into such a gigantic proportion and set one of his feet on land, covering the entire earth, and the other on the skies.

He then asked Mahabali where he should put his third step, and Mahabali offered him his head. Lord Vishnu then trampled Mahabali to hell. There, Mahabali requested hmm to let him meet his people once a year. Onam is the celebration where people celebrate the legend, which is the return of Mahabali once a year, to his people.

Onam is celebrated through a series of events like boat races, dances performances, folk songs, etc. The people of Kerala welcome their generous king to let him know that their state is still flourishing and is full of life and vigour.

The ten days celebrations consist of various events such as Pulikali, Thumbi Thulal, Onathapan, etc. People irrespective of race, caste gender, creed celebrate Onam festival. Then, the people also adorn their houses and places with pookalam, which is like a flower rangoli. It is quite pretty and makes the place more beautiful.

The boat race, also known as Vallam Kali is an essential part of the festival. It is a form of canoe racing in which the people participate. It is a significant tourist attraction. People go to see this fantastic boat race. The boats are called snake boats because they are elongated and look like a snake. The boat is almost 100 metres long and is paddled by a lot of people.

All over, the festival brightens up and cheers up the people of Kerala. It is declared as one of the most important and main festivals of Kerala on India. It is a very religious art that women and girls usually learn to do this from a very young age. A great amount of hard work and diligence is gone into doing this, and when it’s complete, it looks beautiful.

The festival also featured elephant parades with a lot of music and drums and fun. It is known as Thripunithura.

Overall, Onam is a beautiful festival with a lot of small celebrations that went on every day. It is indeed enjoyable and heartwarming. The people want to welcome their past ruler with open hands—moreover, people from all over the world to visit India to witness the joy of this festival. 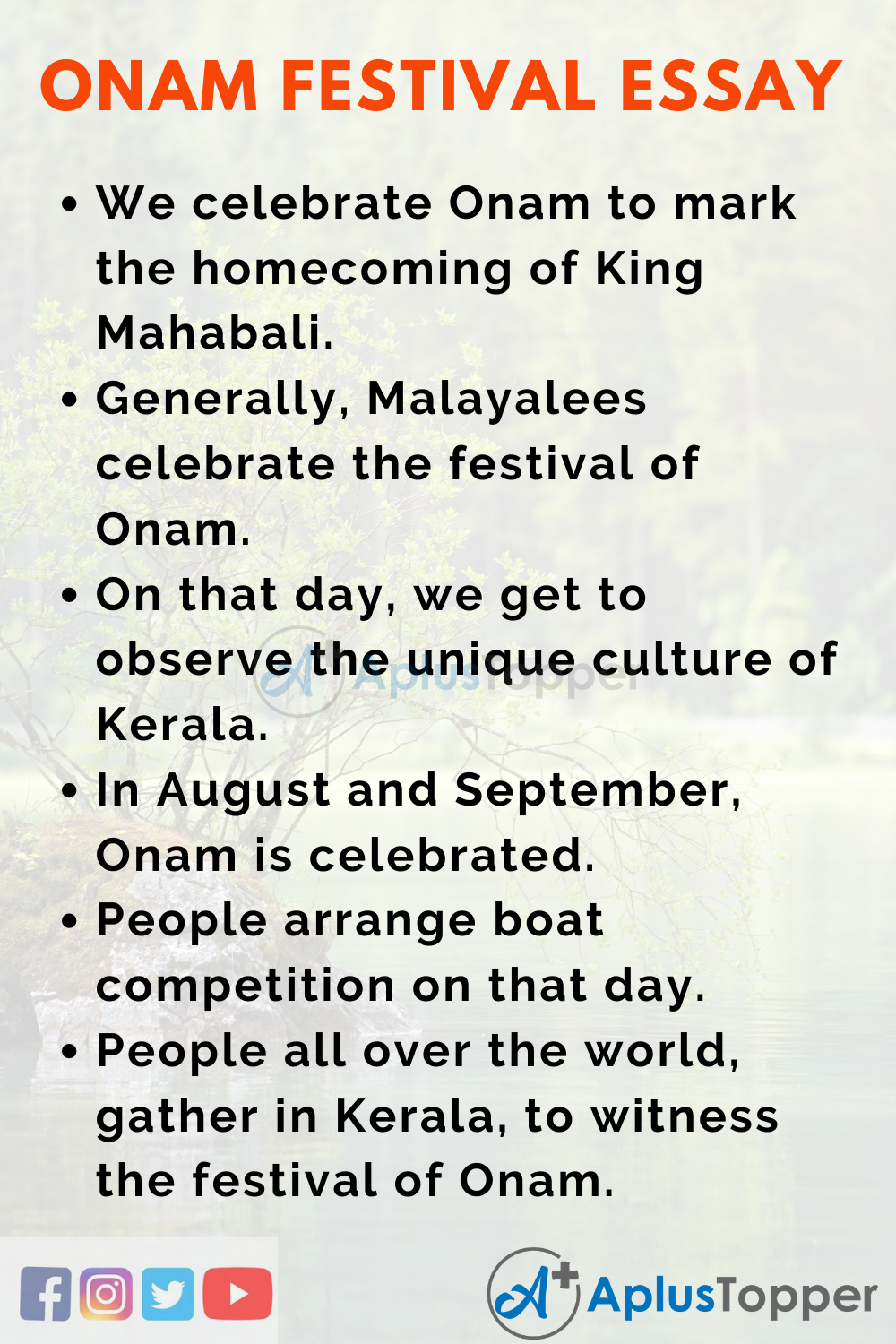 The Onam festival is celebrated during the autumn season. It is vital to the people of Kerala, and they are the ones who are associated with the festival.

The festival is the national festival of Kerala. It’s a harvest festival. In a land like India, where the economy is mostly pastoral and harvest based, the people celebrate every festival which is related to the harvest in India.

The whole of Kerala comes together to play come together to celebrate together, and it has been celebrated since 1960. Various events take place in the celebration, starting from bait races to flower arrangements.

The festival of Onam was celebrated in Kerala because of the legend of the King Mahabali. The festival is celebrated concerning the return of the mythical kind of Mahabali who was a great leader of Kerala.

People of all castes and creed celebrate the Onam festival. The local people love the people festival, and tourists often visit Kerala for this festival. 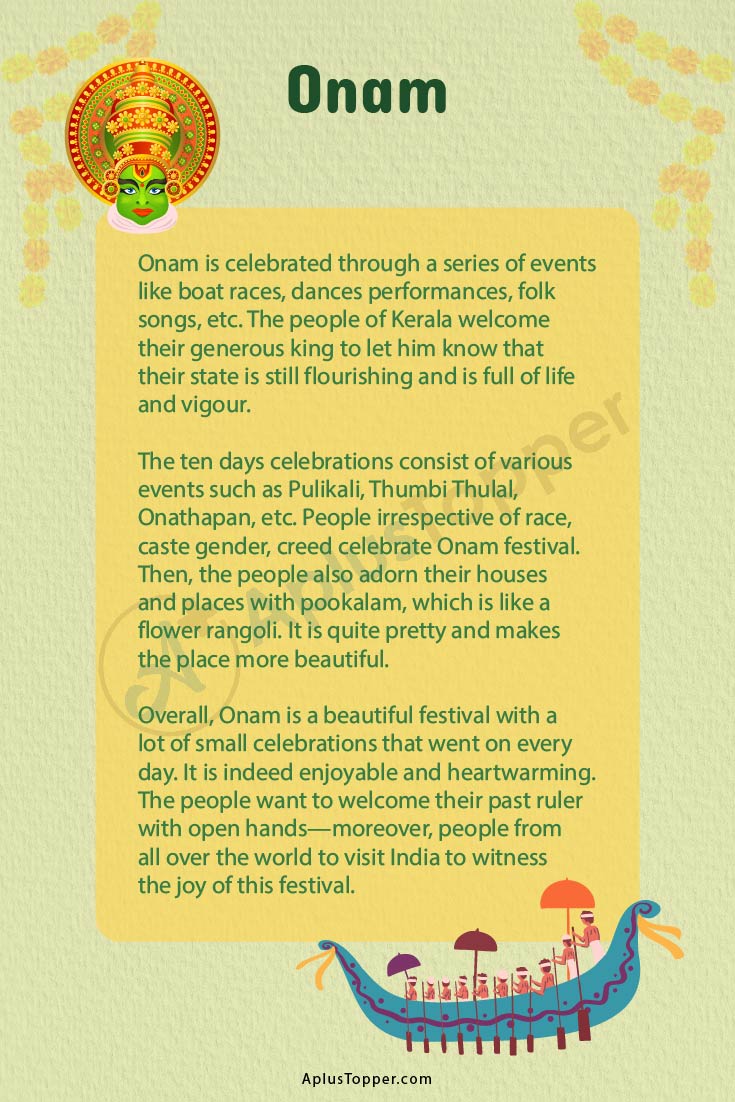 Question 1.
What is the significance of the festival Onam?

Answer:
Onam is celebrated in Kerala by the Malayali people as a harvest festival.

Question 2.
What day keeps the most important in the Onam festival?

Answer:
The second day of the festival, which is known as Thiru Onam or Thiruvonam, that means Sacred Onam Day keeps the most important at the festival.

Question 3.
What is the ritual of the Onam Festival?

Answer:
Onam festival consists of a lot of ritual-like folk dance, family gathering, but the most important ritual is the boat racing.

Question 4.
When Onam falls according to the Malayali calendar?

Answer:
According to the Malayali calendar, in the month of Chingam, which falls on the 22nd Nakshatra, we celebrate the festival of Onam.