Mathematicians from all over the world seek patterns to formulate conjectures, resolving the truth or falsity of a mathematical problem. Maths helps us increase our problem-solving skills by making us think analytically and develop better reasoning ability. Maths is not only an academic subject; it is the way of spending life and has become a part of everyone’s daily routine.

Slogans on Maths in English

Slogans are one-liners intending to educate its readers about the topic. Maths is considered one of the most challenging subjects as it requires time and energy; however, with practice, it can become the most scoring subject.

Here we are providing fifteen slogans on Maths to raise awareness among the readers about the importance and relevance of the subject. These slogans are adequate to have a positive impact on its targeted audience about the subject. 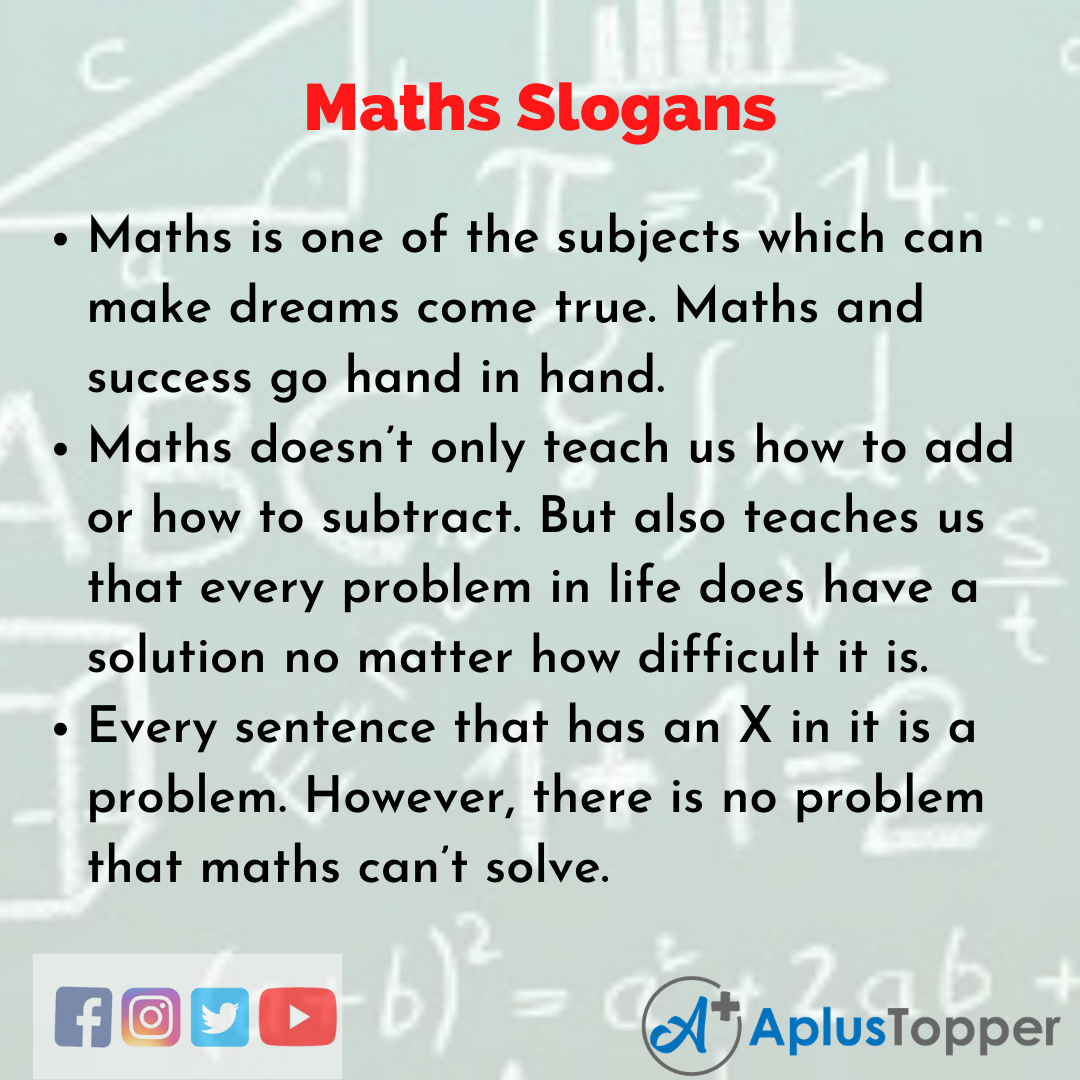 15 Unique and Catchy Slogans on Maths

1. Earliest pieces of evidence found of written mathematics date back to the ancient Sumerian – who built the earliest civilization in Mesopotamia. They were successful in developing a complex system of metrology from 3000 BC.
2. Maths is one of the subjects which can make dreams come true. Maths and success go hand in hand.
3. Maths doesn’t only teach us how to add or how to subtract. But also teaches us that every problem in life does have a solution no matter how difficult it is.
4. The word ‘hundred’ is derived from the old Norse term ‘hundrath’ which mean 120 and not 100.
5. Every sentence that has an X in it is a problem. However, there is no problem that maths can’t solve.
6. Archimedes (287 BC – 212 BC) is considered to be the father of mathematics.
7. Maths is not a subject only about numbers and figures, and it is also about taking the time to understand and solve it accordingly.
8. Until the 16th century, most mathematical symbols were not invented. Problems and equations were written in words.
9. Mathematics will teach you to solve problems that don’t have an easy way of reaching the solution. Maths will help you grow patience.
10. Hypatia is known as the mother of mathematics. She was the first woman to have taught Mathematics.
11. Maths is a way of creative expression used by mathematicians to put together their thoughts.
12. Numbers are powerful weapons, and they give you strength. Studying and learning about numbers makes you stronger.
13. Maths is rich in numbers and formulas. Maths is the root of the solution for every problem.
14. ‘Forty’ is the only number that is spelt as the letters are arranged in alphabetical order.
15. Maths is considered as an art form of giving names that are similar to different things. Question 1.
What are the various types of maths?

Answer:
The following are the various sections of mathematics.

Question 2.
What are a few necessary skills one learns from mathematics?

Answer:
Addition, Subtraction, Division and Multiplication are the basic four operations that form the foundation of all maths problems. To be able to solve any equation or problems related to mathematics, one needs to have the basic knowledge of these four operations.

Question 3.
Who is believed to have invented mathematics?

Answer:
In the beginning of the 6th century BC with the Pythagoreans, the Ancient Greeks started developing a systematic study of the subject mathematics in its own, with Greek Mathematics. Euclid introduced the axiomatic method around 300 BC, which is still used today. It consists of a definition, theorem, axiom, and proof.

Question 4.
What are the basic properties of numbers?

Answer:
Numbers have four basic properties commutative, associative, and distributive and identity. Each of these properties is needed to well-versed by anyone who is looking forward to being to solve problems and reach advanced mathematics, including algebra and calculus.

Question 5.
Who was the first mathematician?

Answer:
Thales of Miletus is one of the earliest known mathematicians. He has been hailed the position of the first real mathematician and also the first known individual to have a mathematical discovery attributed to him.

Question 6.
Who invented 0 in India?

Answer:
Aryabhata was the first Indian to have discovered the number 0. He used the number 0 in the 5th century as a placeholder and also in algorithms for finding square roots and cube roots in his Sanskrit treaties.