Question 1:
(a) Briefly explain two methods that increase land productivity. [2]
(b) What is meant by price elasticity of demand? [2]
(c) Distinguish between sunk capital and floating capital. [2]
(d) Give two reasons for consumer exploitation in India. [2]
(e) Distinguish between an entrepreneur and an organiser. [2]

Answer:
(a) The two methods that increase land productivity are as follows:

(b) Price elasticity refers to the degree of responsiveness of change in quantity demanded due to the change in its price. In certain cases, the change in demand may be at higher rates, in some cases, it may be lower and sometimes there may not be change.
(c)

(d)
The reasons for consumer exploitation are as follows:

Question 2:
(a) State two factors affecting the market demand of a commodity. [2]
(b) Mention two factors that determine the supply of labour. [2]
(c) What is meant by demand pull inflation? [2]
(d) “Progressive taxation is suitable for the Indian economy.” Give reasons to support your answer. [2]
(e) Distinguish between a tax and a fee. [2]

Answer:
(a) Factors affecting market demand are as follows:

(b) Factors determine the supply of labour are as follows:

(c) Demand-pull inflation occurs when the demand for goods and services exceeds the supply available at existing prices. i.e., when there is excess demand for goods and service. Demand increases rapidly because of increase in purchasing power/money in economy which exceeds the limited supply and will bid up the prices. This pull up the price level and will lead to emergence of inflation.

(d) Progressive taxation is suitable for indian economy because of the following reasons:

(e) The two contingent functions of money are as under:

Question 3:
(a) Give two reasons for an increase in public expenditure in recent times. [2]
(b) Distinguish between limited legal tender and unlimited legal tender. [2]
(c) Define simple division of labour. [2]
(d) Give the full form of COPRA. How does it benefit consumers? [2]
(e) Discuss any two contingent functions of money. [2]

(c) Refer Ans. 4(e), 2016.
(d) COPRA: Consumer Protection Act, 1986
This Act recognises six consumer rights. These rights are: Right to be protected, to be informed, right to choose, to be heard, to seek redressal, to consumer education. It has also established a redressal system unique in the world.

(e) The two contingent functions of money are as follows:

Question 4:
(a) Explain the function of Central Bank as a “Banker to the Government”. [2]
(b) Mention any two sources of External Debt. [2]
(c) State two differences between tax on income and tax on a commodity. [2]
(d) Draw a supply curve. [2]
(e) Briefly explain any one exception to the law of demand. [2]

Answer:
(a) As a banker to the government, the central bank makes and receives payments on behalf of the government whenever it becomes necessary. It also floats public debts and manages it for a shorter or longer period as the case may be, for the government.

(b) Two sources of External Debt: 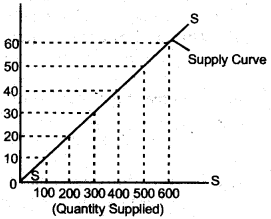 (e) Status Symbol Goods: The purchase of such costly items adds to the status of the purchaser and in such a situation, the desirability of the goods is measured only by their price. The purchaser will only buy high priced goods.
Example: Diamonds, Rolex Watches, BMW Cars etc.

Answer:
(a) In economics, the word ‘land’ is defined to include not only the surface of the earth but also all other free gifts of nature. For instance, mineral resources, forest resources and, indeed, anything that helps us to carry out the production of goods and services, but is provided by nature, free of cost. In fact, ‘Land is a stock of free gifts of nature.’
The features of land are as follows:

(b) According to Samuelson: “Law of demand states that people will buy more at lower prices and buy less at higher prices, (ceteris paribus) other things remaining constant.”
Demand Schedule: According to Prof. Marshall, demand schedule is a fist of prices and quantities. It is a tabular statement of price-quantity relationship between two variables. 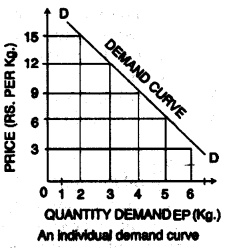 Answer:
(a) Definition of Supply:
“Supply refers to the quantity of a commodity offered for sale at a given price in a given market at a given time.”
In simple words, supply means that quantity of a particular commodity which a seller is ready to sell at a given price. It is the price which vitally affects the supply of goods.
The rightward shift of the supply curve denotes the increase in supply. Increase in supply is a situation when quantity supplied increases due to the favourable changes in factors other than price.
The reasons for rightward shift of the supply curve are as under:

(b) Public Debt: Public Debt refers to “Obligation of Government particularly those evidenced by securities, to pay certain sums to the holders at some future date. In,simple words, Public Debt can be defined as the amount of debt taken by government from internal as well as external sources to meet out its deficit. Government needs to borrow when current revenue falls short of public expenditure.
Types of Public Debt

Question 8:
(a) Define a Commercial Bank.   [5]
How do Commercial Banks mobilise deposits from the public?
(b) Explain five advantages of division of labour.     [5]

Answer:
(a) Commercial bank is a financial institution which deals in money i.e. borrowing and lending of money. It performs the functions of accepting deposits from the general public and giving loans for investing to them with the aim of earning profit.
The three methods adopted by commercial banks to mobilise funds from the public are as under:

(b) Advantages of division of labour:

Answer:
(a)
“The rise in price level after the point of full employment is true inflation.”  —JM. KEYNES—
In simple words, inflation is a situation in which prices of goods and services constantly rise, at a fast pace.
The cause of inflation are as follows:

Question 10:
(a) Explain five ways in which Consumers are exploited in India. [5]
(b) With the help of suitable diagrams explain the following degrees of elasticity of supply.