Question 1:
(a) State two advantages of opening a bank account. [2]
(b) What is the difference between impact of taxation and incidence of taxation? [2]
(c) Define cost-push inflation. State two factors causing it. [2]
(d) The bus fare between two cities is reduced. How will this affect the demand curve for bus travel between the two cities? [2]
(e) Distinguish between Real capital and Debt capital with the help of suitable examples. [2]

Answer:
(a) Two advantages of opening a bank account: 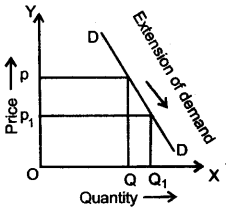 Questions 2:
(a) Distinguish between simple division of labour and complex division of labour. [2]
(b) What is meant by expenditure tax? Give an example. [2]
(c) How does money solve the problem of lack of a common measure of value that existed under the barter system? [2]
(d) How does the nature of a good affect its elasticity of demand? [2]
(e) Mention two agency functions of a Commercial Bank. [2]

(b) Expenditure tax is a taxation plan that replaces the income. Instead of applying a tax based on the income earned, tax is allocated based on the rate of spending. This is different from a sales tax which is applied at the time the goods or services are provided and is considered a consumption tax.
(c) Money is accepted as a common measure of value. Under the barter system, the value of a commodity were expressed in terms of other commodity. The value of rice could have been expressed in terms of piece of cloth but after the evolution of money, the problem get resolved as now price of any commodity can be expressed in terms of money.
(d) The nature of good affect its elasticity of demand in following manner—

Questions 3:
(a) Mention two causes of low efficiency of labour in India. [2]
(b) Mention any two forms of consumer exploitation. [2]
(c) Define Public debt. [2]
(d) Indirect taxes are regressive in nature. How can they be made progressive? [2]
(e) Distinguish between demand deposits and fixed deposits. [2]

Answer:
(a) Two causes of low efficiency of labour in India:

(b) Two forms of consumer exploitation:

(c) Public Debt—“National debt is a debt which a state owes to its subjects or to the nationals of other countries.”         —Findlay Shirras
In simple words, Public Debt refers to the loan raised by the government within the country or outside the country. The government may borrow from individuals, business enterprises and banks, etc. when its expenditure exceeds its revenue. But it is not a source of revenue like tax.

(d) Indirect taxes are regressive in nature as it is generally imposed on the consumption of goods. They are indiscriminately in that sense the poor people have to pay as much as rich people.
It can be made progressive and equitable by imposing heavy taxes on luxury goods consumed by the rich consumers and low taxes on the essential commodities.

Question 4:
(a) Indicate the degree of elasticity of a supply curve parallel to the X-axis. [2]
(b) Distinguish between Creeping inflation and Running inflation. [2]
(c) How does money act as a standard of deferred payment? [2]
(d) Briefly explain the importance of public expenditure in the industrial development of developing countries. [2]
(e) Distinguish between Statutory Liquidity Ratio and Cash Reserve Ratio. [2]

Answer:
(a) Supply curve parallel to X-axis represents perfectly elastic supply, where quantity supplied is responded by an infinite amount to a very small change in price. 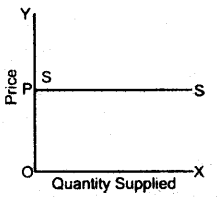 (c) Money acts as a standard of deferred payment. It means payment to be made in future can be expressed in terms of money. Credit is given in terms of money. If a person needs 10 kilograms of rice but does not have the required amount of money with him at the time, he borrows this amount. The person needed rice, but he borrowed money. He did not borrow rice. He will return money to the lender, after the agreed period. That’s why money is called standard of deferred payments.

Question 5:
(a) What is meant by increase in demand? Discuss any four factors affecting price elasticity of demand. [5]
(b) Define land. Explain the importance of land as a factor of production. [5]

Answer:
(a) Increase in Demand—Increase in demand refers to a situation when the consumers buy larger amount of a commodity at the same existing price. Increase in demand may take place due to rise in income, a change in taste, rise in the price of substitutes, a fall in prices of complementary goods, increase in population, redistribution of income, etc.
Factors Affecting Price Elasticity of Demand

(b) “Land is a specific factor or that it is the specific element in a factor or again that it is the specific aspect of a thing.” —Prof. J. K. Mehta
The term ‘land’ generally refers to the surface of the earth. But in economics it includes all that, which is available free of cost from ‘nature’ as a gift to human being. Land stands for all nature, living and non living which is used by man in production.
Importance of Land as a factor of Production—In every kind of production, we have to use land. Therefore land is a basic factor of production.

Fundamentally speaking, ‘land’ is the original source of all material wealth and it is of immense rise to mankind. Inspite of being a passive factor, it is an important factor of production. An overall economic prosperity of a country is directly related to the richness of its natural resources.

Question 6:
(a) Define supply. State the law of supply and explain it with the help of a diagram. [5]
(b) Define a consumer. Explain the importance of educating consumers of their rights. [5]

Answer:
(a) Supply: “Supply may defined as a schedule that shows the various amounts of a product for which a particular seller is willing and is able to produce and make it available for sale in the market at each specific price in a set of possible prices during some given period.” —Mc Connel
In simple words, supply means that quantity of a particular commodity which a seller is ready to sell at a given price.
Law of Supply: “The law of supply states that, other things being equal, the higher the price, the greater the quantity supplied or the lower the price, the smaller the quantity supplied.” —Dooley
It can be illustrated with the help of the following schedule and diagram: 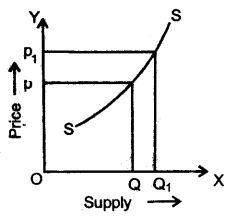 In the above diagram price is Rs. 10 per kg., at this price supply is 5,000 kg. We observe that as the price increases the quantity supplied goes on increasing, making the supply curve upward sloping.

(b) Consumer—A person who has indicated his or her willingness to obtain goods and/or services from a supplier with the intention of paying for them is termed as consumer.
Importance of Educating Consumers of their rights—

Question 7:
(a) Name the institution that enjoys the monopoly of note issue in India. Briefly explain two qualitative methods of credit control adopted by this institution. [5]
(b) Define labour. Explain four important characteristic of labour. [5]

Answer:
(a) The institution that enjoys the monopoly of note issue in India is RBI (Reserve Bank of India). It is the central bank of India.
Qualitative Methods of Credit Control—

(b) “Any exertion of mind or body undergone partly or wholly with a view to some good other than the pleasure derived directly from the work is called labour.”
Characteristics of Labour—

Measure formulated to prevent the problem of food Adulteration in India Prevention of Food Adulteration Act, 1954—It was enacted to eradicate rampant evil of food adulteration and to ensure purity in food articles so as to maintain public health.

Answer:
(a) Income of an entrepreneur is residual in nature as entrepreneur bear risk and reward of risk is profit. Profit is income remaining after deducting all the direct and indirect expenses.
Functions of an Entrepreneur

Question 10:
(a) Define a tax. Explain briefly two merits and two demerits of direct taxes. [5]
(b) What is inflation? Discuss the effects of inflation on:

Answer:
(a) Tax: “A complusory contribution from a person to the government to defray the expenses incurred in the common interest of all without reference to special benefits conferred.” In other words, taxes are compulsory payments to government without any corresponding direct return of services or goods by the government to the tax payers.
Merits of Direct Taxes:

(b) Inflation: “A state in which the value of money is falling, i.e. price are rising.”
In other words, Inflation is a rise in price levels with additional characteristics or conditions. It is incompletely anticipated; it does not increase to further rises, it does not increase employment and real output; it is faster than some safe rate; it arises from the side of money, it is measured by prices net of indirect taxes and subsidies; and/or it is irreversible.
Effect of Inflation on: